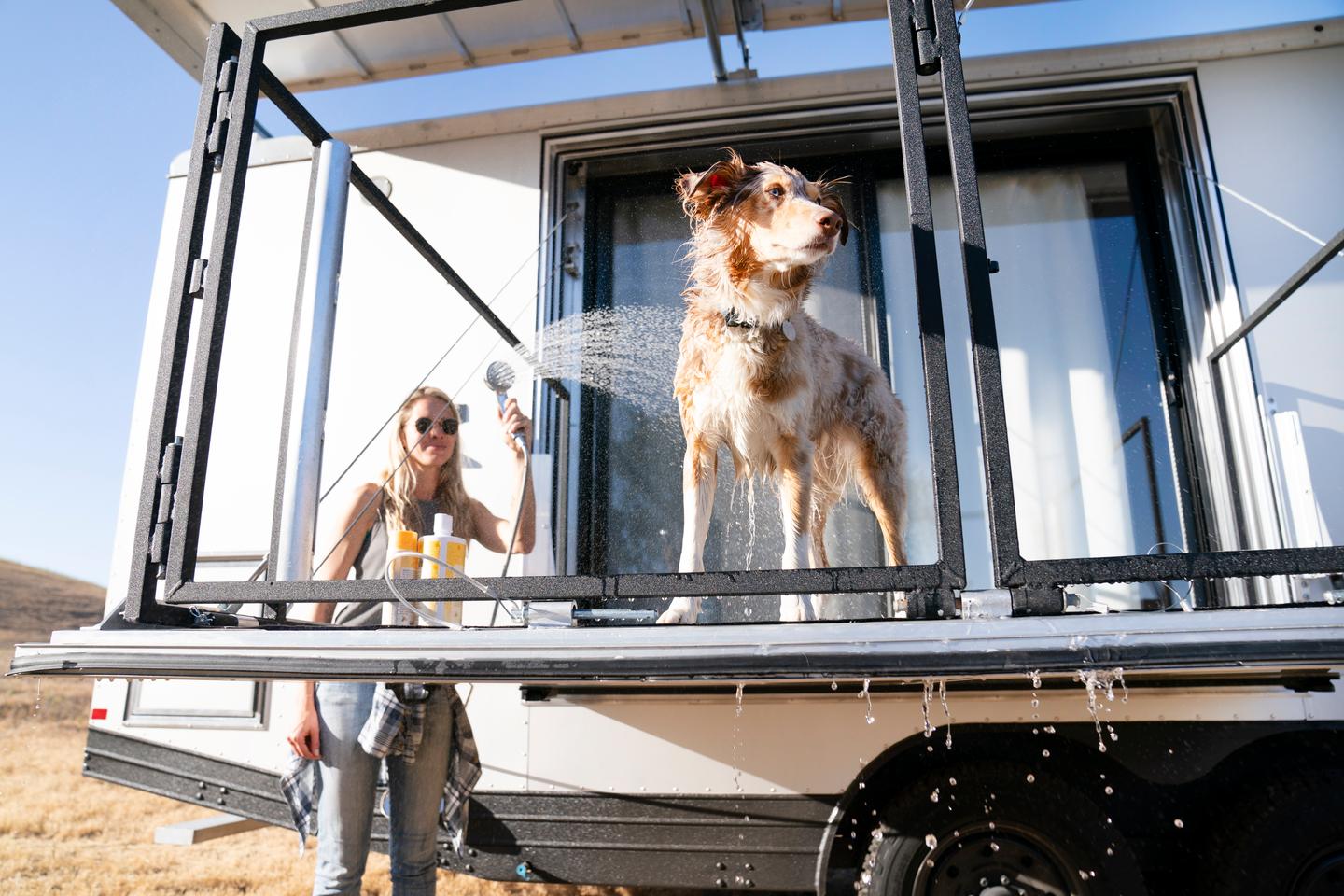 With more available battery power than some electric vehicles, up to 3,400 watts of deployable solar charging and a list of appliances that reads like a luxury vacation home, the Living Vehicle is already one of the most capable off-grid trailers money can buy. For model year 2023, it’s loading up on even more self-sufficiency, adding an optional water generator that makes clean drinking water from ambient humidity, even in the desert. Now that it’s able to develop both electric power and clean water, the Living Vehicle is ready to ramble even farther from civilization.

The key to Living Vehicle’s latest off-grid superpower is the Watergen atmospheric water generator (AWG). Originally a military-grade technology, Watergen’s AWG system pulls atmospheric moisture in with a fan, extracts it via condensation, runs it through a multi-step filtration and purification process, and dispenses clean water as conveniently as a water cooler or tap.

We previously saw Watergen’s mobile water-generation tech on a concept car and concept overland truck, but Living Vehicle’s system represents the first production-vehicle application of a Watergen RV system. Unlike the OnBoard system Watergen is developing as a more general RV solution, the proprietary system custom-developed for the Living Vehicle does not have a roof intake, which could interfere with the trailer’s roof-mounted solar array. Instead, it pulls air in through a wall vent.

The Watergen AWG system is further integrated with the Living Vehicle’s existing hardware, running off the solar-connected battery system and delivering excess water into the 379-L onboard fresh water tank. It can generate up to 19 liters of water a day, plenty for a family drinking 2 to 4 liters per person each day (the Living Vehicle sleeps up to six people). Because Watergen’s system automatically filters and purifies, the water can be used for drinking and cooking without further treatment at the tap.

With the available Watergen system, the Living Vehicle can keep supplying the taps with clean water, even when it’s miles away from the nearest water supply infrastructure

It’s not uncommon for off-grid campers or boats to include water “making” capabilities. Such systems usually take the form of intakes that pull water in from a natural lake or stream before purifying it to a potable standard. Systems designed to process salt water also desalinate the water. Rugged off-road/grid RVs like the Bruder EXP-6 trailer and Bliss Mobil truckable expedition module have such options.

In contrast, Watergen’s system uses moisture that’s virtually omnipresent everywhere you go, promising a higher level of convenience and capability. Users no longer have to track down an existing water source and can instead harvest water wherever they camp or homestead. Watergen’s system does require humidity levels of 20 percent or more, but even the driest cities in the US have an average humidity of 30+ percent (though it does drop below 20 percent at times during the year).

The Watergen AWG joins the recently announced Apple-powered Creative Studio remote office package on the 2023 Living Vehicle’s options list. The company tells us the Watergen system will cost US$25,995, and, as we previously reported, the Creative Studio will tack on $23,995. That’s a pretty quick $50K if you want the very latest in off-grid living and telecommuting.

The base price for the Living Vehicle itself rises to $339,995 for 2023. This week’s announcement does not mention any other major changes for the new model year. 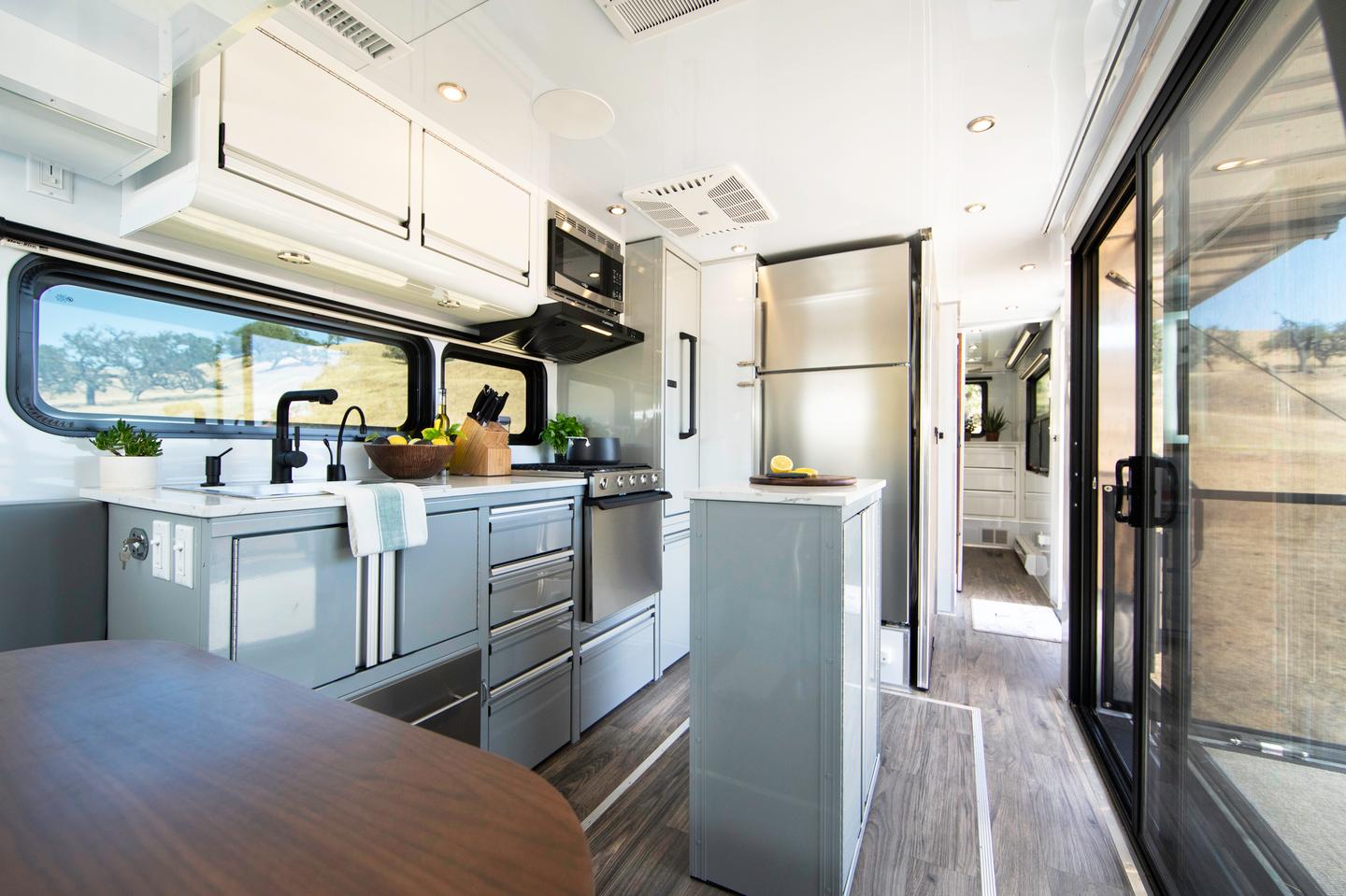 The Living Vehicle’s kitchen comes equipped like a home kitchen, with standard and available features like a full-size fridge, range with oven, dishwasher and microwave

The Core base model brings 1,320 watts of solar, while the most powerful Pro-ev variant packs 3,400 watts and 240-V Level 2 EV charging capabilities. Battery capacity ranges between 14.4 kWh and 57.6 kWh, while package-matched inverters size between 5 and 20 kW. A 5.5-kW propane generator with auto transfer is available as an optional backup.

Each trailer is custom-built to order, and Living Vehicle currently estimates lead time at 10 to 12 months.

The four-minute video introduction runs a little longer than it needs to, but it does a nice job of showing more detail on how the Watergen system works and integrates with the Living Vehicle.