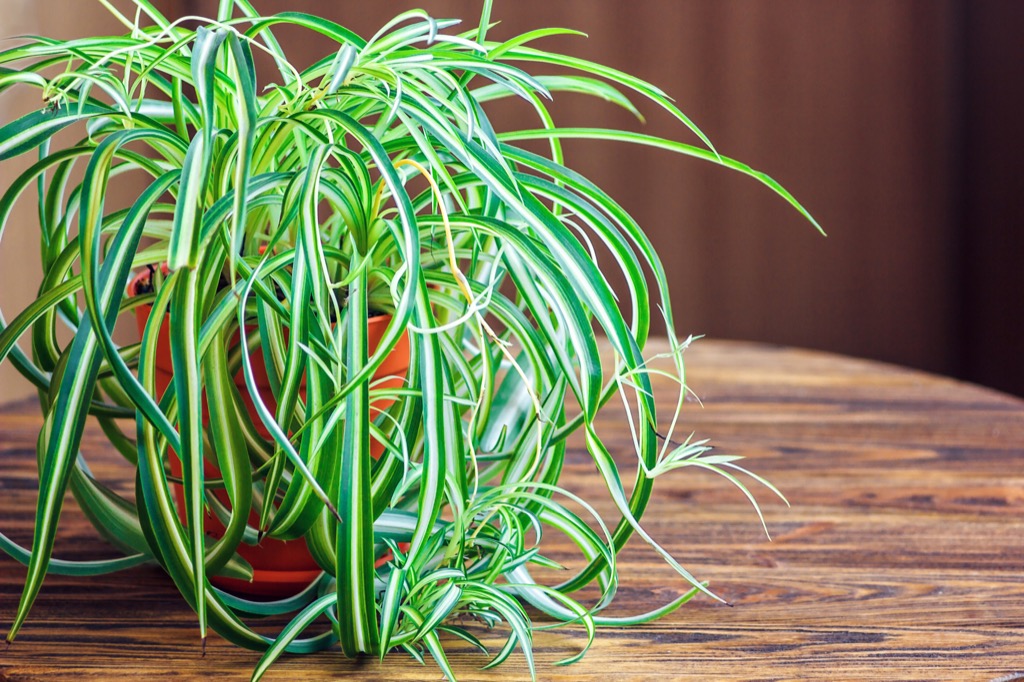 There’s no easier way to brighten your space than by including plants in your decor. Whether you opt for a hanging vine, a windowsill planter, or a standalone tree, plants add life, energy, and beauty wherever they’re placed. It turns out, they could also improve the air quality. According to a landmark study by NASA, plants can reduce indoor air pollutants in a closed, limited environment. While it’s unclear how effective they are at performing that magic outside of laboratory conditions—or in, say, a house—it’s known that plants can spruce up the air at least in a small way. To bring their powers into your home, read on to discover the plants that could help you breathe better, according to science.

READ THIS NEXT: 5 Easy Hacks to Save Your House Plants That Gardeners Swear By.

Snake plants are some of the hardiest plants out there, beloved for their ability to thrive in low light and with little water. Not to mention, they’re beautiful to look at with vertical green and yellow leaves that reach anywhere from several inches to several feet. As they sit in your home, they’ll also clean the air. One 2009 study published in HortTechnology found that lab chambers with snake plants in them saw a faster depletion of ozone concentration than chambers without them. Ozone is essentially smog, and inhaling it can attack the lungs and cause health problems, according to the American Lung Association. If these little plants can counter that, then we welcome them to do it.

These overflowing houseplants are just as adaptable as snake plants. Put them in indirect light with well-drained soil and they’ll be perfectly happy. You can rest assured that while they grow, they’ll freshen up your space. In the NASA study that discovered plants’ air-purifying properties, spider plants removed 95 percent of the toxic substance formaldehyde—a cancer-causing gas that can irritate the skin, eyes, nose, and throat—from a chamber in 24 hours. Giving one of these plants a spot of honor in your home just might help you breathe easier throughout the day.

READ THIS NEXT: If Your Plants Are Drooping, This Bathroom Product Will Revive Them. 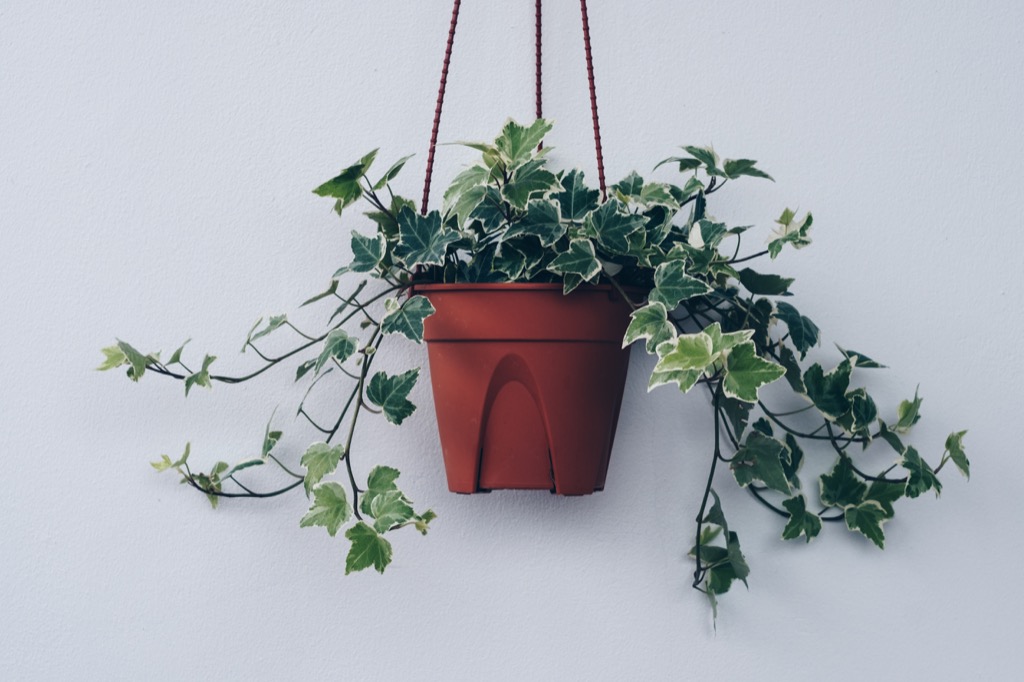 This climbing plant can be used as ground cover or as an indoor vine to creep over hanging baskets or curtain rods. NASA’s study found it to be the most effective houseplant for removing benzene, a toxic chemical created by tobacco smoke and industrial exhaust. It depleted almost 90 percent of benzene from the air and lowered the concentration of trichloroethylene—a liquid that can damage the immune and reproductive systems, among others, and cause some cancers—by almost 11 percent. This plant prefers a moist environment and medium light. Allow it to climb around your home and it’ll bring air purification wherever it goes. Just be careful, as the plant is toxic to humans and pets.ae0fcc31ae342fd3a1346ebb1f342fcb 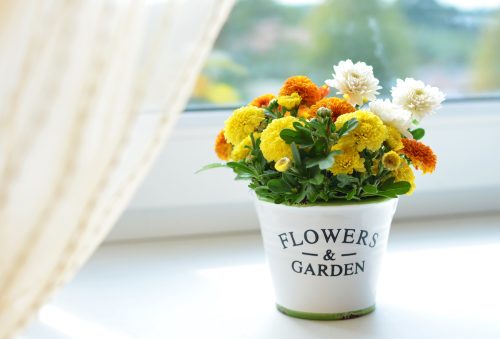 Flowering plants can provide air purification benefits, too. The NASA study put potted mums to the test and found that in a 24-hour period, they cleared 61 percent of formaldehyde, 53 percent of benzene, and 41 percent of trichloroethylene from a sealed chamber. Mums are somewhat easy to care for and require full sunlight and frequent watering. They’ll flower from September to the first frost and provide color, joy, and better breathing.

RELATED: For more plant advice delivered straight to your inbox, sign up for our daily newsletter. 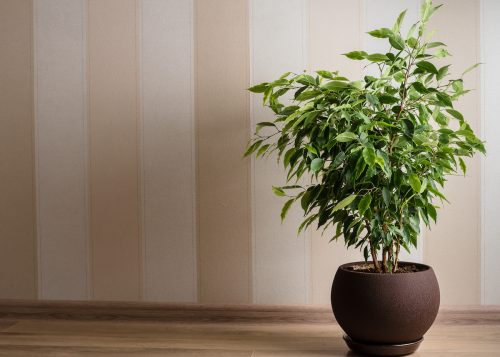 Fig trees are uber-popular and look impossibly chic when placed in the corner of a room. In addition to their stylish appearance, they also have air-cleaning abilities. The NASA study found they remove almost 48 percent of formaldehyde, 30 percent of benzene, and 10.5 percent of trichloroethylene. Keep them in the sun with moist soil and they’ll be happy to upgrade your air. 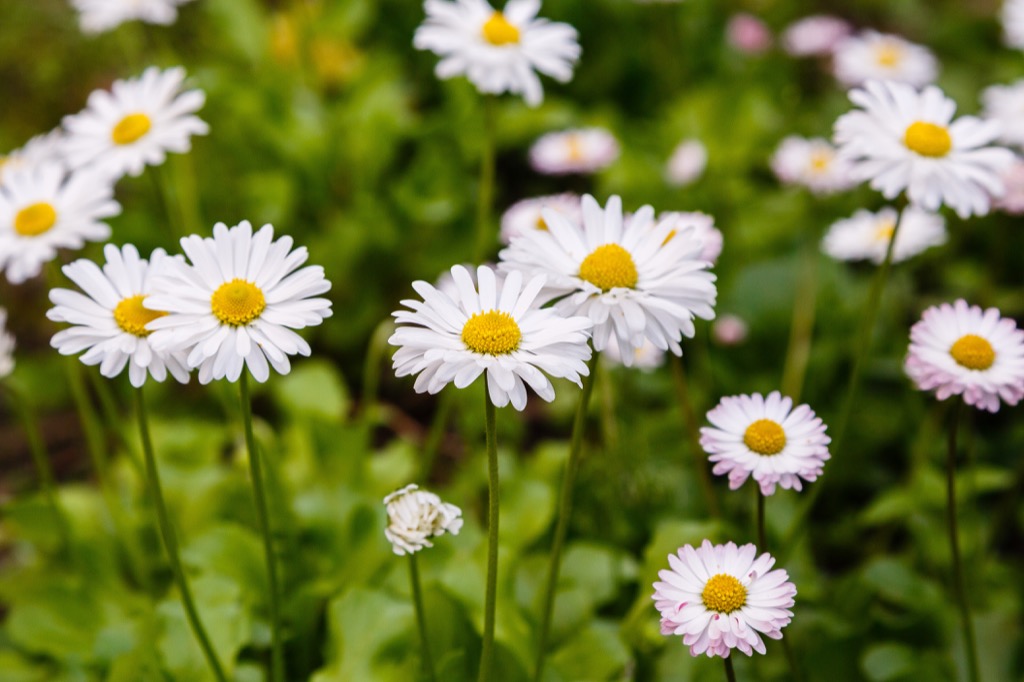 The gerbera daisy is another flowering plant that offers color and better air quality. In the NASA study, it reduced formaldehyde by 50 percent, benzene by almost 68 percent, and trichloroethylene by 35 percent. To care for these flowers, put them in bright light (this is key, or they may not produce blooms) and water them when they feel dry. They’ll develop long-lasting flowers from spring until autumn, but unfortunately, they are annuals and usually only last one season.

READ THIS NEXT: If Your Plants Are Dying, This Simple Trick Will Revive Them.