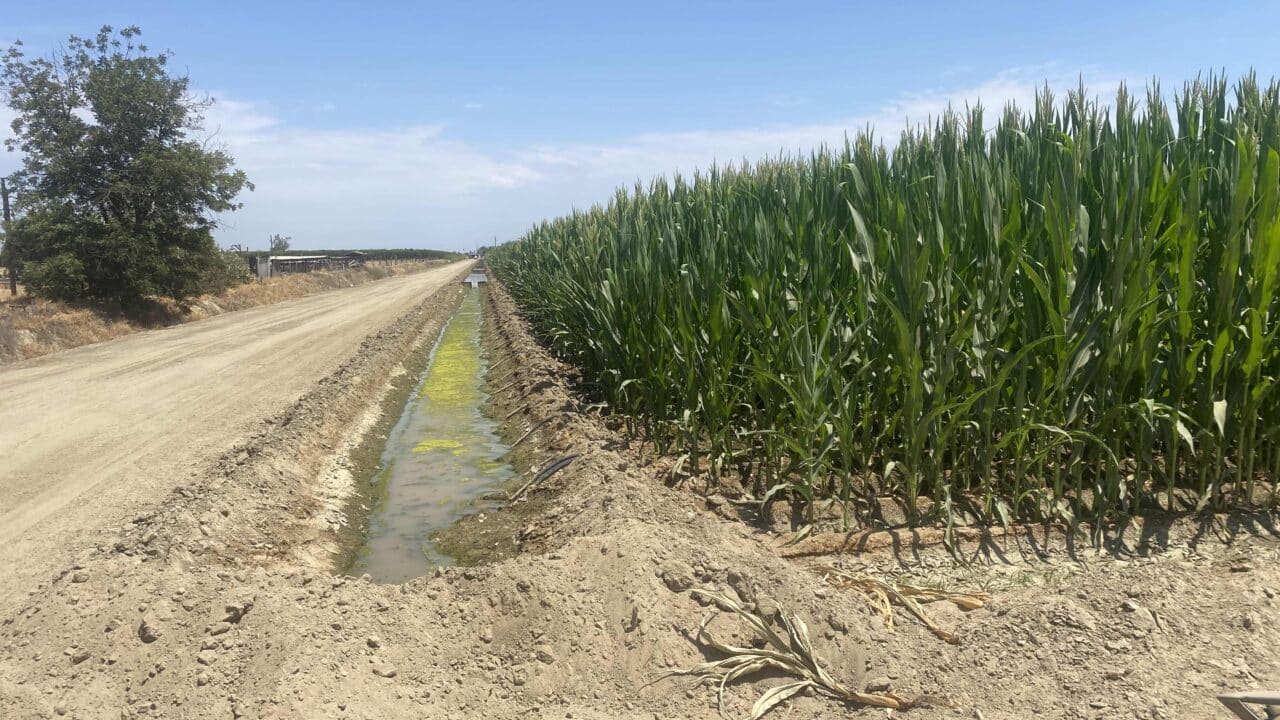 WEST GOSHEN, Calif. (CN) — Thousands of acres of crops, from corn to nectarines, surround Melynda Metheney’s community in West Goshen, California — one of the key battlegrounds where residents say irrigation and overpumping have depleted drinkable water.

“You know what you’re up against when you live in these communities. You have to decide, are there enough of us?” said Metheney, standing in her parched yard.

In 2012, Community Water Center (CWC) told the Goshen community of about 3,300 that its water was contaminated with nitrates. Residents spent two years fighting to connect to Cal Water — the third largest regulated utility in the nation — and only some did. Some of Metheney’s West Goshen neighbors still don’t have well water.

“It’s like saying, you’re not worth the money to finish it,” Metheney said.

Metheney has been at the forefront of her neighborhood’s effort with CWC to negotiate another agreement with Cal Water. But people feel intimidated in agriculture-dominated Tulare County asking to be prioritized when wells run dry or get contaminated.

Melynda Metheney describes a decade of battles to connect her West Goshen community to CalWater in Visalia, Calif. as the drought worsens and groundwater pumping has not slowed down. (Natalie Hanson/Courthouse News)

The San Joaquin Valley is ground zero in the struggle between agriculture and communities where low-income people struggle to pay for water.

In 2014, then-Governor Jerry Brown signed the Sustainable Groundwater Management Act. Its purpose is to force counties like Tulare to form groundwater sustainability agencies, or GSAs, to prevent overpumping of groundwater during drought.

“If they are determined to be inadequate, that triggers the state water board’s state intervention authorities,” Stork said, adding that timeline is up to the DWR.

After eight years, the outlook is unlikely to change. Nell Green Nylen of UC Berkeley’s Wheeler Water Institute said the groundwater management act gives local agencies flexibility to manage their water resources. But it contains loopholes, and rolling out enforcement will take years if the state pursues that route.

“There isn’t much requiring them to do certain things, beyond engagement and knowing all interests of those affected,” Nylen said. She said GSA boards tend to be dominated by farming interests — rather than rural communities, largely people of color and essential workers, who feel the lack of clean water first.

Water standing in an irrigation ditch by a corn field in West Goshen, Calif, where more than half a million acres of crops are irrigated each day although Tulare County sits in a critically overdraft zone. (Natalie Hanson / Courthouse News

“Anytime we bring up the responsibility for drinking water users, they accuse us of turning it into a political argument,” she said. “Nobody is saying we need to get rid of all agriculture. We want to see it done in a way that does not come at the expense of their water.”

Tricia Stever Blattler, director of the Tulare Farm Bureau, disagreed. With more than 1 million acres of farmland — over half requiring irrigation — the bureau thinks the groundwater management act will harm agriculture profits by reducing land that can be farmed.

Blattler said ag interests pay for packaged water and nitrate control programs that test water and treat wells, but think surfacewater needs to be brought to critically overdrafted areas. She claimed disadvantaged communities with dry, toxic wells are suffering “because everyone is overpumping “ — although data shows farms pump most groundwater.

“There are many in ag that still don’t agree, and don’t like the SGMA laws, but the reality is the overdraft, subsidence, and water quality issues of the San Joaquin Valley are not going to be fixed without a framework like SGMA law driving the process,” Blattler said. 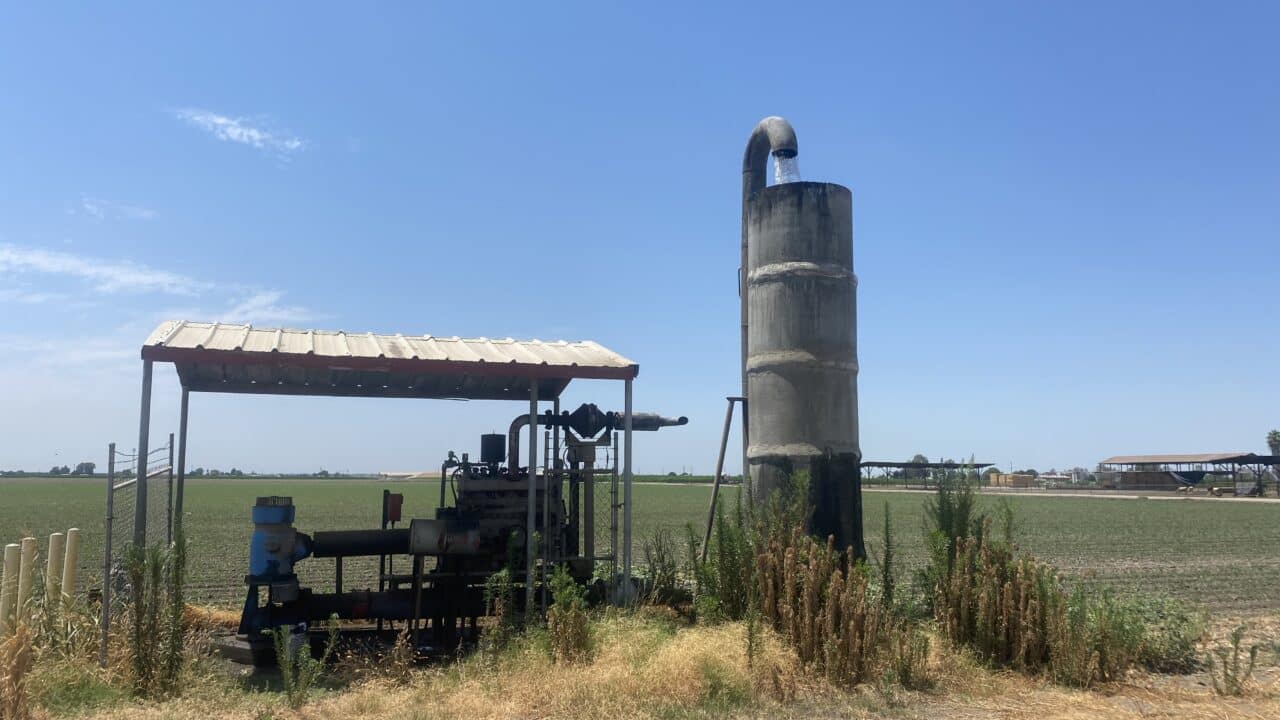 Pumps like this one are seen around West Goshen in Tulare County, Calif., where irrigation is brought to more than half a million acres of crops. (Natalie Hanson/Courthouse News)

McCusker said the utility, serving customers from the Palos Verdes peninsula in Los Angeles County to Chico, could not connect everyone in Goshen due to preexisting agency boundaries like West Goshen Mutual Water Company’s. He acknowledged many communities lack funds to connect when wells dry or go toxic.

Although some districts fine overpumpers, wealthy interests can afford to pay fines and continue their practices. Tran said GSAs have a legal responsibility to protect domestic wells and access to safe water, with large funding packages from the DWR for sustainable planning.

Tulare County Supervisor Eddie Valero said the State Water Resources Control Board has stepped in before, ordering the town of Orosi to consolidate with East Orosi in 2018 when 500 ran out of water. The board also ordered Exeter to connect to Tooleville after refusing the latter water.

Valero said community efforts have successfully created community service districts managing their power and water resources. But he thinks overworked residents cannot take the brunt of advocating to end inequities. He said the Water Resources Control Board is not holding up its end — pointing to a state audit report finding the board “lacks the urgency necessary to ensure that failing water systems receive needed assistance in a timely manner.”

“There are plenty of dollars allocated from the state,” Valero said. “But a lot of entities are not willing to make that leap or jump, because at the end of the day it comes down to the resources financially to sustain for the long term.”

Metheney thinks agriculture’s political and financial clout have a strong grip on local and state government. These interests are unlikely to create sustainability plans prioritizing domestic well users over profits, even if the state fines them.

“They say ‘How much am I gonna make by the time they (the state) put their foot down? Is it worth it?’ For them, it is,” she said.

“It’s a numbers game for them at the end of the day. But human beings are not commodities.” 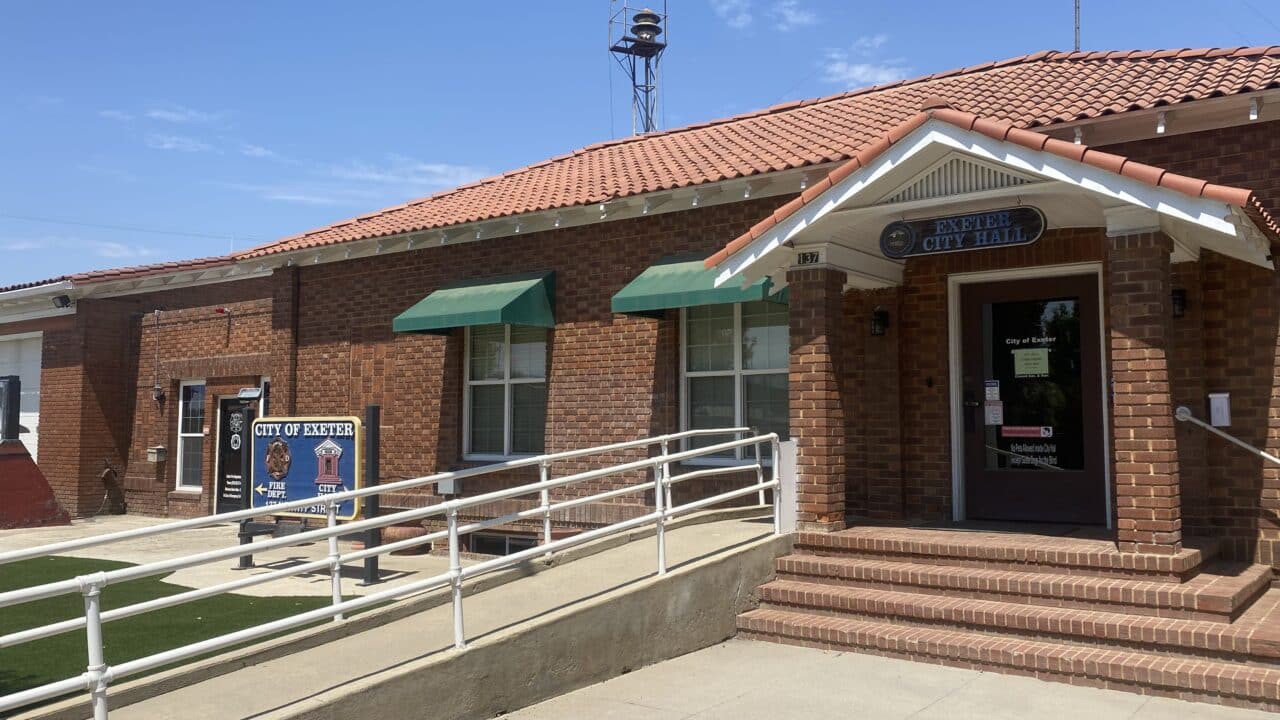 Exeter City Hall in Tulare County, California. The city at first refused connecting its water system to the nearby community of Tooleville in 2021 until the state intervened. (Natalie Hanson/Courthouse News)

Sign up for the Top 8, a roundup of the day’s top stories delivered directly to your inbox Monday through Friday.