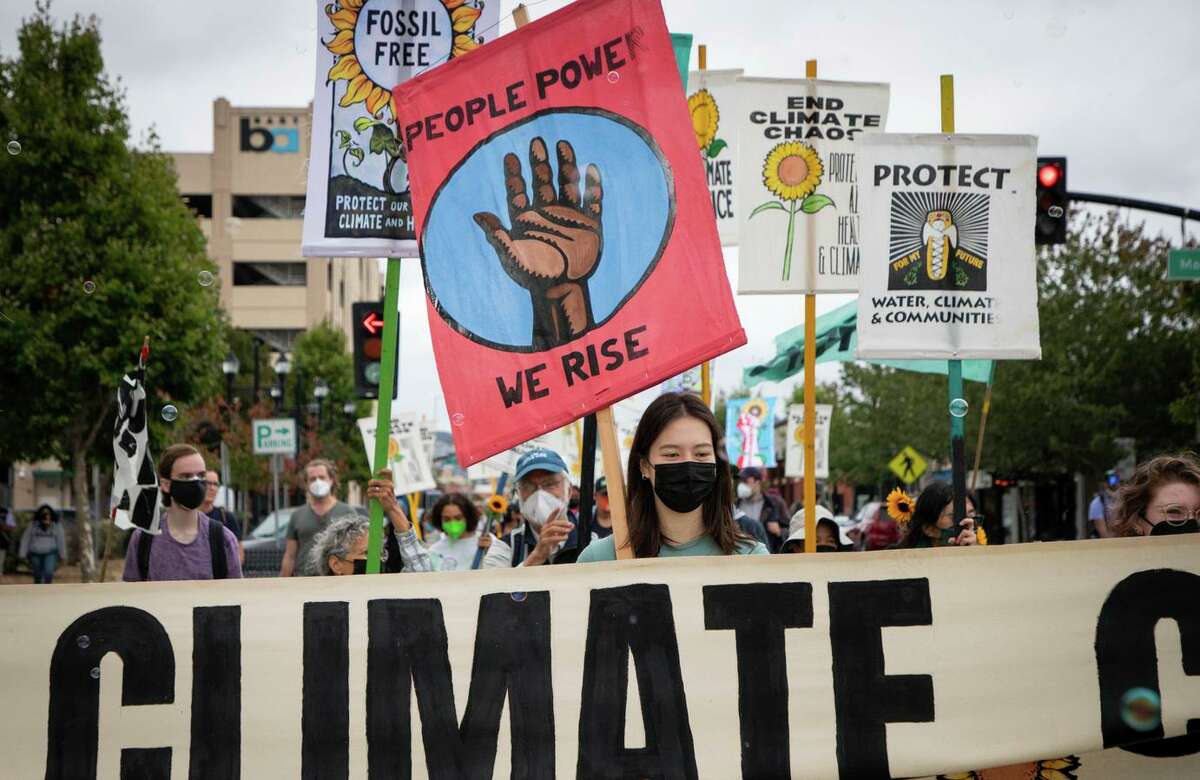 Ten years ago, an explosion and fire at the Richmond Chevron refinery poured black smoke and rained acrid chemicals across the East Bay city, sending thousands to hospitals gasping for air. At the time, the tragedy dominated the airwaves.

Today, the event is a footnote of Bay Area history. But on Saturday a group of community members and activists marched through Richmond to the refinery to commemorate the event, demanding an end to fossil fuel dependence and the dominance the refinery has had over the city for more than 100 years.

Around 60 protesters assembled at the Richmond BART station Saturday morning, holding signs emblazoned with sunflowers and slogans like “End Climate Chaos,” “Chevron Kills” and “Chevron has a flare for business,” a reference to the pillars of fire that continue to burn near the refinery’s smoke stacks.

Some families brought small children, including one woman with two children on the back of her bicycle that sported a cardboard sign written in a child’s hand that read: “We need clean air to breathe. We need clean waters for our sea animals too. Chevron must GO!”

Kat Lee, a Richmond resident and activist with the Asian Pacific Environmental Network, said she remembers watching the news of the 2012 explosion from her aunt’s house in San Leandro, and worrying about the affects the black plume of smoke could have on her mother and sister, then a 2-year-old with asthma.

Lee said she hoped the march would “help hold Chevron accountable,” and highlight the need to transition to clean energy sources like solar power.

A protester marches to the Chevron Refinery in Richmond, Calif. on Saturday, marking ten years since an explostion at the refinery. Sunflowers were in sight all around as they are symbolic of the climate justice movement.

Amaya Edwards/Special to The Chronicle

As the march wound its way westward in the lanes of Macdonald Avenue, protesters on bicycles blocked cars from entering intersections and blasted upbeat hip-hop and Afrobeat tunes, complimented by the occasional blaring of a sympathetic car horn.

“We’re all united in the need to get off fossil fuel,” said Jack Lucero Fleck, a retired San Francisco traffic engineer marching with a sign depicting the march’s sunflower emblem. Fleck said the march was a remembrance, but also a call to action to use available technology to move away from dirty energy sources like fossil fuels.

He acknowledged that the City of Richmond fills its coffers with tax revenues from the refinery, but that he wants to see public dollars sunk into alternatives so the jobs the refinery creates could be moved to clean energy industries.

As the procession turned onto Richmond Parkway past the train yard stacked with shipping containers, Richmond native Doria Robinson, part of the Richmond Our Power Coalition and executive director of Urban Tilth, a nonprofit dedicated to cultivating a more sustainable and just food system, recalled the explosion.

“From my front porch on 12th Street I could see the fire,” Robinson said. Then the smoke blackened the sky, blanketing an Urban Tilth garden that local youth had been growing food in all summer with “grimy, gooey black soot.”

The Richmond Our Power Coalition leads a march in Richmond, Calif., on Saturday to commemorate the tenth anniversary of the Chevron Refinery explosion.

Amaya Edwards/Special to The Chronicle

Robinson said while it was important to mark history, her group was looking forward to a Richmond without the refinery. She said an affiliated group, Communities for Better Environment, was working on a decommissioning plan for the plant to be proposed to elected officials.

“We need a (Richmond) general fund that is not dependent on fossil fuels,” Robinson said.

Chevron did not immediately respond to an emailed request for comment about the march commemorating the anniversary.

A report on the explosion found that it was made worse by a faulty emergency response, and a lax approach to safety measures and inspections that might have prevented the event.

After joining with another group of protesters and swelling their ranks to well over 100 people, protesters made their way to the gates of the Chevron refinery. There protesters painted and touched up colorful murals on the roadway with anti-Chevron slogans, waving yellow and black banners that said “Stand Up to Big Oil.”

Richmond police vehicles kept watch over the event, and no Chevron representatives came out of the black gate enclosed behind a layer of cyclone fencing.

Richmond Vice Mayor Eduardo Martinez then called for the crowd to take local action on climate justice. After his speech Martinez acknowledged, “The refinery is not going away” any time soon, but said the city and community could find ways to live with its presence until it was eventually decommissioned.

Martinez, who is running for Mayor of Richmond, said the refinery needs to contribute more in tax revenues to the city than it does currently. He also floated ideas like Chevron putting money into an industrial risk bond that would pay for damage to the city and community the refinery caused.