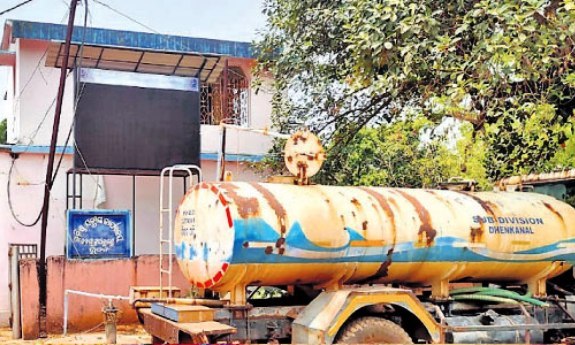 Bhuban: Residents from riparian areas of Brahmani river in Bhuban town of Dhenkanal face acute drinking water crisis with mercury on rise and amid scorching heat of summer. Hundreds of them became vocal Monday demanding immediate solution to the issue.

“Brahmani is the second largest river in Odisha and a number of industries in neighbouring districts draw water from it for their day to day use. On the contrary, our families do not get a bucketful of water to quench thirst,” many residents of Bhuban town rued.

Drinking water shortage is a perennial problem here. Notified area council (NAC) and Public Health department in Bhuban have failed in fulfilling the basic requirement of residents, some alleged.

According the department sources, 20,85,000 litres of drinking water is being supplied every day to different households in Bhuban town. Fifteen wards in the civic area has 121 tube-wells, 98 water stand-posts including open wells, but do not suffice the need.

On being contacted, junior engineer Sonali Nayak said, “Plans are afoot to set up two mega projects, two overhead tanks and two water treatment plants, in order to ensure availability of pure drinking water to the residents of Bhuban town.”

During summer, pure drinking water will be provided through tankers to areas facing scarcity, the JE Nayak added.

It is pertinent to mention, the civic body was accorded NAC status in 1971. As per 2011 census, its population was 22,187, which might have increased in the mean while. Several slums have mushroomed in suburbs of the civic area.