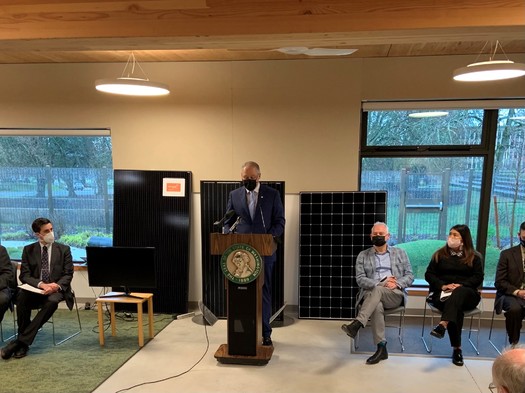 Washington state lawmakers meet in Olympia starting next week for the 2022 legislative session. Groups working on the issue of climate change see it as another chance for the state to take action.

Kelly Hall, Washington director of Climate Solutions, said the Legislature has made progress in recent years – including committing the state to 100% clean energy by 2045. But with the impacts of a warming climate mounting, Hall said the state should do more to address it. She said she thinks a top priority this session should be making sure that buildings run on clean energy.

Hall said the state should come up with a targeted electrification plan to incentivize utility customers to invest in electric appliances. Gov. Jay Inslee has also named decarbonizing the building sector as one of his priorities for the session, since buildings are the fastest-growing source of carbon emissions in the state.

Leah Missik, Climate Solutions’ Washington transportation policy manager, said public transportation is another area in need of attention. She noted that climate-friendly forms of getting around have other benefits as well.

“For a very long time, we have underfunded public transit,” she said, “and also have not spent enough in Washington state to ensure that folks who are not driving or cannot drive can get around safely, either by walking or even a bicycle, or something else.”

Hall said the need for action is urgent – and the state needs to be smart about it.

“Not investing right, right now, will have impacts for years to come,” she said, “and just make those events worse and worse.”

The Washington Legislature is scheduled to convene on Monday and adjourn on March 10.

Just two people remain missing after Colorado’s most costly wildfire on record destroyed nearly a thousand homes and businesses in Louisville and Superior.

After the first significant snowfall in the Denver Metro area this winter finally helped snuff out the Marshall Fire, Colorado Gov. Jared Polis reported Sunday that federal and state officials are ramping up recovery efforts.

“To the families who have lost everything they have,” said Polis, “we are setting up everything that we can to help you get through what is likely to be one of – if not the – most difficult periods of your lives.”

President Joe Biden approved a disaster order on Saturday, and Federal Emergency Management Agency Chief Deanne Criswell, along with some 100 staff, are now on the ground in Colorado.

People needing assistance are encouraged to visit the website ‘disasterassistance.gov,’ and people with disabilities can call or text the Disability and Disaster Hotline at 800-626-4959.

Joe Boven rushed to his family’s home in Louisville on Thursday. But by the time he could make it past road closures and barricades, the house – which he said held generations of heirlooms – had already burned to the ground.

“Hundreds of years of history just went up in flames,” said Boven. “So, it’s pretty devastating. But even though all of that history is gone, it’s great that we are able to still have the people. It’s great they’re all alive, so that we can continue to create history in the future.”

The cause of the fire remains unknown. But climate scientists at the state’s top universities cite the warmest and driest period from June to December on record as a major contributor.

Boven said his family will find a new place to live, but he wants leaders to move faster to rein in climate pollution.

“Having watched so many people lose their homes,” said Boven, “and knowing that so many people don’t have a place to go now, I think it’s crucial that we really see our planet and you know, this natural environment as our home, as a whole. Because there isn’t anywhere else that we can go.”

Record high temperatures, torrential rain, unlikely tornados and devastating wildfires led to record news coverage of climate change in October and November, according to data compiled by a researcher at the University of Colorado-Boulder.

Max Boykoff, lead project investigator for the Media and Climate Change Observatory in the university’s Department of Environmental Studies, said the language being used to describe the phenomenon is also changing. It’s moved from terms like “greenhouse effect” and “climate change,” to “climate catastrophe” and “climate emergency.”

To gather the latest data, Boykoff’s team monitored 127 sources across radio, television and newspapers in 13 languages from 59 countries around the world. Colorado has been the latest site of intensifying climate change, when a fire fueled by drought and extreme winds swept through suburbs north of Denver, destroying nearly 1,000 homes.

While news coverage on the topic of climate change dropped off when the pandemic hit, Boykoff expects to see a sustained increase in news about the issue.

“You know, there really isn’t one, pivotal event that we found over time that changes the amount or the content itself,” Boykoff observed. “But it is a lot of those different stories coming together that create these moments where climate change is on the agenda.”

Boykoff pointed out depending on where you live, climate stories are related to agriculture, sea-level rise, drought-related fires or other extreme weather events. He also worries if communities lose local information resources and become “news deserts,” they won’t be part of the solution.

“And so, if you don’t have local reporters talking about these local issues, some of these communities then have a hard time understanding what’s going on around them,” Boykoff noted.

He added use of the term “climate catastrophe” by U.S. news outlets increased 50% between 2020 and 2021, and tripled in the United Kingdom.

Tax credits and direct payments to companies that capture and store their carbon emissions underground are a key feature of the climate provisions outlined in President Joe Biden’s $1.9 trillion Build Back Better Act.

“So if West Virginia can find a way to capture carbon from the smokestacks of our coal-fired plants,” said Probst, “that can keep them running and can keep coal miners working. “

Critics, however, argue that carbon-capture technology isn’t developed enough to significantly curb emissions, diverts resources away from renewables, and in some cases can be used to increase oil production.

Research has shown that the Build Back Better Act, in its current iteration, could potentially slash U.S. carbon emissions in half by 2030.

Probst acknowledged that carbon-capture technology comes with a hefty price tag – but he pointed out almost all new technologies are expensive initially.

“Right now it is really expensive, and the incentives will help,” said Probst. “But long-term, the way we see it with Citizen’s Climate Lobby is that putting a price on carbon content of fossil fuels would further incentivize this.”

He said he believes that if energy companies have to pay a fee for the carbon content of their product, such as coal, for example, but can then receive a rebate for capturing that same amount of CO2, the system will further incentivize carbon capture technology.

“And with a price on carbon that is gradually increasing over time,” said Probst, “it once again helps secure the long-term viability of the technology. “

Disclosure: Citizens’ Climate Lobby contributes to our fund for reporting on Budget Policy & Priorities, Civic Engagement, Climate Change/Air Quality, Energy Policy. If you would like to help support news in the public interest, click here.