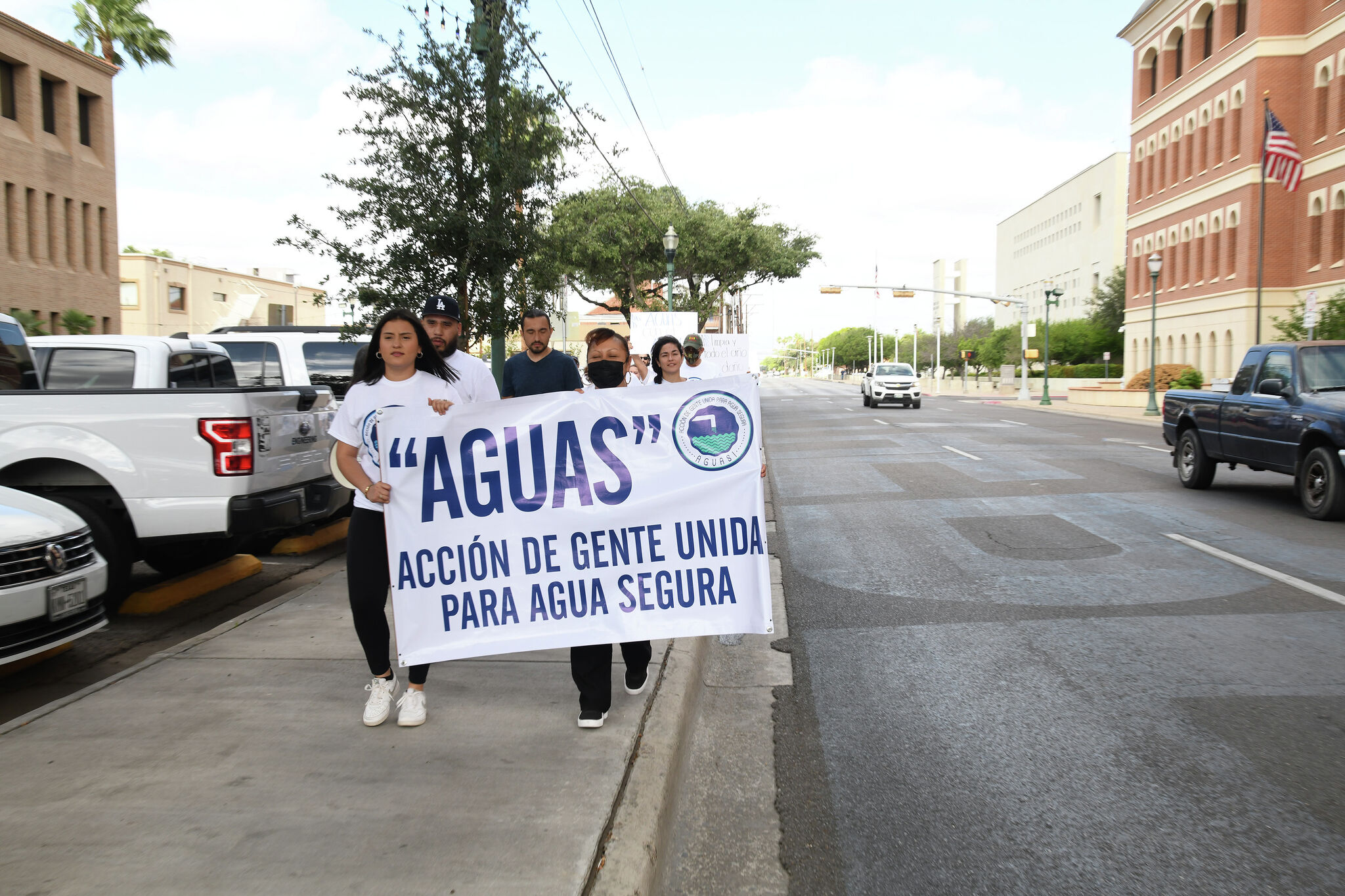 Following a march around Laredo City Hall on Thursday, AGUAS! and Texas RioGrande Legal Aide held a press conference prior to delivering a formal notice to the City of Laredo regarding a potential citizen lawsuit under the Safe Drinking Water Act.

This action is in response to the boil water notices impacting the residents of Laredo, specifically those in the south and 359 colonias.

According to lead attorney Kristen Adams, TRLA has represented AGUAS! — or Acción de Gente Unida para Agua Segura! — since October of 2019 as it advocates for clean drinking water for south Laredo and the nine colonias residents. They claim that those areas were and have been disproportionately affected by the six boil water notices since then, including the recent February city-wide boil water notice.

“Today we are sending the city a 60-day notice, a letter of intent to sue, under the Safe Drinking Water Act; with the hopes that in those 60 days, the city is going to come to the table and listen to our clients demands to be able for the city to provide them safe drinking water on an equal basis to all of their Laredo consumers,” Adams said.

Members of AGUAS! marched along the city hall block, chanting and raising signs demanding clean water and for the city to address the disruptive boil water notices. The march saw men and women of all ages, including children, raise signs that denounced the discrimination felt by residents represented by the citizens’ organization.

TRLA stated that the consumers in the south and colonias are often forgotten by the city as opposed to the northern consumers. They outlined the incidents that started the current course to the action, on Sept. 5, 2019 when the TCEQ investigated the city’s water system and the lack of disinfectant in the water.

“On Sept. 20, 2019, TCEQ advised city leaders that the utilities department must either increase TCI levels withing 24 hours or issue a boil water notice to its customers,” they recapped. “On Sept. 21, 2019, under federal and state drinking water standards, TCEQ notified that the city that it must issue a BWN because it had failed to increase TCI levels; however, the city ignored the TCEQ and did not issue a BWN until Sept. 28, 2019.”

They noted that since then five more boil water notices were issued over 2020, 2021 and 2022, with one lasting over 63 days in the colonias.

Adams added that those represented are not seeking money but injunctive relief in the form of having the city fix the water system. Working with experts, Adams said that they are looking into expedient corrective actions to make sure the issues are fixed.

While those experts were not in attendance and Adams said she would not speak on their behalf, she said that the actions they are looking into were ways to address reoccurring violations of the system such as failing to properly disinfect water before distribution, failing to maintain their equipment and facilities in good working condition and failing to follow monitoring and reporting sampling requirements required by federal law.

Furthermore, TRGLA also represents five individual consumers from the south Laredo and colonias. This includes Veronica Aleman, who has lambasted the city’s treatment of the area in regard to safe drinking water. She said that while AGUAS! would prefer to address the water issues without a federal lawsuit, six boil water notices and the disparity of how they are fixed after other areas of the city, led AGUAS! to come to the current course of action.

In April, city council gathered to discuss 22 projects that will be a part of the first phase of repairs within the water master plan over the span of the next five years. Phase 1 will cost approximately $163,510,625, and according to interim city manager Samuel Keith Selman, the current water rate structure will be able to fund every project for the first five years.

“The city has hired consultants and engineering firms, the most recent one was back in July 2021, but there have been no changes. We had another boil water notice for 13 days in February. Also, we understand that it is going to cost a lot of money to fix these issues, but we think there could be more done now to the infrastructure,” Adams said.

“Further, records that we received from a public information act request to the city showed that the city has only applied for one grant in the last five years for improvements of the public water system, but it was actually for the wastewater treatment plant. So, they have not been securing funds to make the necessary changes that we need now to secure safe drinking water.”

The rate structure is a 3% increase to the water tax rate until 2031, with 2022 being the final year where the tax rate increases by 5%. However, Aleman said it has been infuriating to hear that the burden will continue to be added to people already struggling that live in the south and colonias.

“(The city) just wants to put their projects on the table and just do it the way they want without actually thinking about the better ways that can be set forth in order to help us,” Aleman said. “That’s why I personally think that if we had people that are caring and are thinking about how we can fix these issues in those positions, that figure would just be relatively a lot smaller.”

Aleman criticized the council meeting proceedings and the passing of blame throughout the past two and a half years, saying that the disparity seen by members of the areas over the years beyond 2019 are now jaded by the lack of attention.

The Centers for Disease Control and Prevention stated that the Safe Drinking Water Act was passed by Congress in 1974, with amendments added in 1986 and 1996, to protect drinking water. It authorizes Environmental Protection Agency to establish minimum standards to protect tap water and requires all owners or operators of public water systems to comply with these primary (health-related) standards.

“AGUAS! was founded in October 2019 when the City of Laredo ignored an order from TCEQ to issue a boil water notice resulting from the city’s inability to maintain proper levels of chlorine in the drinking water system,” AGUAS! founder Carlos Blanco said. “We were outraged that for seven days, the city disobeyed the order and allowed people to consume potentially unsafe water- prioritizing saving face over peoples’ health.”

When results indicate that a contaminant is present at a level that exceeds standards, states and EPA work with public water systems to take steps to prevent or remove the contaminants and notify consumers so that they can make informed choices.

Representatives from the city did not provide a comment for this story.