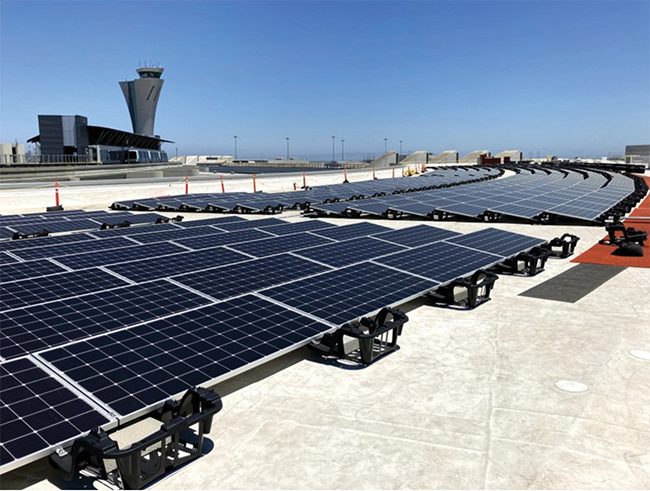 A terminal at San Francisco International Airport (SFO) is the world’s first to receive a new and important design recognition from a green building group. Harvey Milk Terminal 1 at SFO is being recognized for its commitment to sustainability and renewable energy.

Airport terminals may not be top of mind when it comes to energy innovation. Those involved with upgrades to a terminal at San Francisco International Airport (SFO) would beg to differ.

Harvey Milk Terminal 1 at SFO, named for one of the first openly gay men elected to public office in the U.S., earlier this year became the first airport terminal in the world to earn a “Platinum” certification using the latest standards from the Leadership in Energy and Environmental Design (LEED) program developed by the U.S. Green Building Council (USGBC). The agency’s latest version of the standards, known as LEED v4, considers the design, construction, and operation of what it calls high-performance structures.

A number of factors secured the designation for Harvey Milk Terminal 1, many involved with the site’s energy efficiency and sustainability, including its power generation from a rooftop solar array. The terminal upgrade project, which includes increasing the number of gates in Terminal 1, has an estimated price tag of $2.4 billion. Work on the terminal, which replaced an existing 10-gate facility, began in 2016.

The project weathered numerous pandemic-related delays, and was helped this year by money from the federal Infrastructure Investment and Jobs Act. Officials said the airport will receive a total of about $250 million in funds from the infrastructure bill over the next five years, which also will go toward an upgrade of the airport’s electrical power distribution infrastructure.

The Terminal 1 project includes adding more gates in a multi-level building that includes an art gallery, food halls, concessions, an automated baggage handling system, connections to ground transportation, and new post-security connections to the international terminal, enabling the upgraded facility to handle both domestic and international flights. The project’s commitment to renewable energy, and energy efficiency in its design and operation, has earned it a Top Plant award from POWER.

“Harvey Milk Terminal 1 sets a new benchmark for the airport experience, and serves as a tribute to the life and legacy of a pioneering civil rights leader,” said Ivar C. Satero, the airport’s director. “For millions of people around the world, SFO is the first impression of the San Francisco Bay Area, and Harvey Milk Terminal 1 showcases what makes our region great: a spirit of innovation, a focus on the environment, and most importantly, a commitment to diversity, equality, and inclusion.”

The rooftop solar (Figure 1) came with some design challenges. Officials said the azimuth, or angle, of the array was analyzed in relation to the airport’s runways, so that approaching airplanes would not be impacted by glare when landing or taking off. An engineering firm that specializes in glare studies ensured a safe layout for the solar panels. Two contractors, Hensel Phelps and Redwood Electric, found a racking system—Sollega’s FastRack FR510—that could follow the curvature design and handle the roof’s undulations. The system is slightly angled, which makes it appear to be curved when seen from far above.

Sollega said the radius design of the array “demonstrates the flexibility of the FR510’s capabilities,” and said the system “will generate over 2.2 MWh a year of electricity.”

“It’s a high-profile project. It was a LEED certification building, and being involved in a LEED project is exciting,” said Elie Rothschild, sales manager for Sollega. “We’re a San Francisco-based company, so it’s great to be involved at the airport.”

Rothschild told POWER: “It was a challenging roof, because it’s a C-shaped building. We had to adapt the arrays to suit the roof. There are pretty significant undulations on the roof, and our racking handles undulations pretty well. We’ve done a few airports now, so we’ve gotten experience with that.” Rothschild said Sollega already is preparing to work on the next phase of the Terminal 1 expansion project. The company a few years ago installed rooftop solar systems at the Honolulu International and Kahului airports in Hawaii.

Harvey Milk 1 features a tote-based Independent Carrier System, or ICS, to manage checked baggage. It’s the first such system in the U.S.; officials said it uses 50% less energy, and is easier to operate and maintain, than previous baggage systems. The terminal also uses “self-energizing,” or regenerative, elevators that recycle energy, rather than discarding it as heat. The site’s “Go-Slow” escalators and moving walkways reduce their speed when not in use, another energy-saving feature.

Radiant heating and cooling complement the terminal’s displacement ventilation, another energy-efficient feature that also improves the indoor air quality. Controllable, dimmable, long-life LED fixtures throughout the facility also save energy. Other features of the project include:

■ Dynamic glazed windows that change with the sun’s location to reduce glare and improve comfort.

■ Selection of products, systems, and materials with the least environmental impact.

■ An integrated building management system measures energy and water use and adjusts equipment to be more efficient.

■ Seamless access to all facilities, including public transit, via the AirTrain electric people mover, which eliminated more than 600,000 miles of bus trips annually.

■ Recycling and diversion of about 95% of construction waste from landfill.

Installations in the terminal include several educational displays about the life of Milk, who was assassinated after serving 11 months on the San Francisco Board of Supervisors in 1978. Corridors leading to the customs areas include a photo essay about Milk. “I think people in the Bay Area are probably familiar with him, whereas people coming from abroad have maybe never even heard of him,” said Doug Yakel, an SFO spokesperson. “This really helps tell the story to a more international audience.”

HKS, an airport design firm; Woods Bagot, a global architectural practice; ED2, a technology company; and KYA, a group that creates sustainable built environments, were all part of the project’s design-built team. HKS served as the project lead for programming and exterior envelope architecture, as well as the sustainability lead partnered with Arup.

Arup, a multinational professional services company that provides design, engineering, architecture, planning, and advisory services, “worked with the multidisciplinary design team to make sure everything from structural materials to floor finishes to unique systems met rigorous sustainability criteria,” according to the company. Arup said, “By optimizing the cement content of the structural concrete, we were able to reduce the embodied carbon footprint of the entire building by over 10%.” The company also said, “In a first for the building industry, we are obtaining an environmental product declaration for the passenger boarding bridges—a critical piece of information that allows for the assessment and improvement of the environmental footprint of building components.”

That environmental focus aligns with the airport’s “Sustainability Strategy,” which emphasizes zero waste, carbon neutrality through electrification, and a “zero net energy” campus.

Satero told POWER, “This facility was designed with both our passengers and employees in mind … as a place to be relaxed, a place to be healthy, and a place to be inspired by the legacy of pioneering civil rights leader Harvey Milk. This terminal embodies the very best values of the San Francisco Bay Area, and we are proud that this is the first airport facility ever to be certified under the Fitwel standards.”

Fitwel is a building rating parameter for commercial buildings, and for both single-tenant and multi-tenant existing structures, that offer best practices and guidelines in designing and operating healthier buildings. They are established as a collaborative initiative coordinated by the U.S. Centers for Disease Control and Prevention in conjunction with the General Services Administration.

The USGBC, meanwhile, said the LEED v4 certification “is designed to up the ante with a more flexible, performance-based approach that calls for measurable results throughout a building’s life cycle.” Said Satero: “We are truly proud to be the first airport in the world to earn LEED v4 Platinum certification. This achievement continues a tradition of leadership in sustainable facilities that includes the first LEED Gold airport terminal in the United States, and the world’s first zero net energy facility at an airport. My thanks go out to the entire project team for continuing to push the envelope for what airports can accomplish to support our environmental goals.”

—Darrell Proctor is a senior associate editor for POWER (@POWERmagazine).