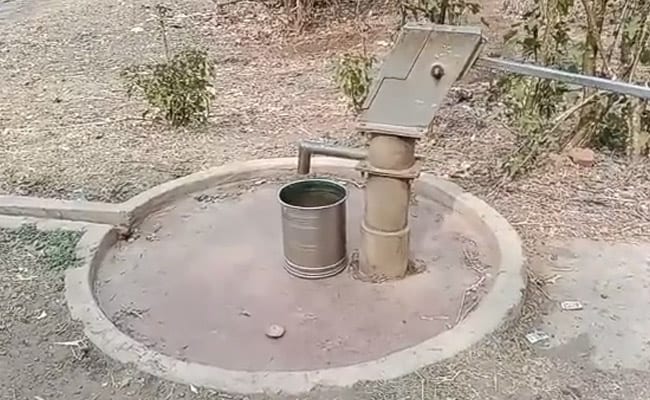 Madhya Pradesh Chief Minister Shivraj Singh Chouhan, some days ago, had said that by 2024 tap water would be supplied in all villages in the state. But some 84 blocks out of 313 are facing serious water shortage and drinking water remains out of reach for lakhs of people in the state.

The government said it has given tap water connection to 48.69 lakh rural families and 4,258 villages in Madhya Pradesh.

The Public Health Engineering Department approved Rs 30,668 crore for water supply schemes and 5.57 lakh hand pumps in the state, out of which 95.80 per cent hand pumps are working – at least on paper.

But the situation on the ground shows a different picture. There is water rationing in Madhya Pradesh villages, partly due to an early onset of summer.

In village Ajhawar, for example, the panchayat has decided to conserve water by allowing each family to take only two pots of water from the village handpump as all other sources of water in the village have dried up.

Residents of village Laizhapi in Barwani district are not only facing an severe water crisis, but it’s also affecting family dynamics and relations. Water shortage is so severe in this village that women avoid marrying in this area.

Newly-married women are leaving their homes due water crisis.

“We bring water from a hand pump 3 km away. Three hand pumps have dried up and travelling through hilly roads is very difficult,” said Gyani Bai, a resident.

Another villager, Devram, said, “A major reason many men in the village are not getting brides is water crisis, and around 10 newly-married women are also going back to their parental homes due to this trouble.”

Besides villages Laizhapi, Goregaon, Semlet and Khairwani, Amli in Barwani district is also facing a water crisis. People bring water from sources located 3-4 km away early in the morning. This is the home district of cabinet minister Prem Singh Patel.

“Marriage is different. It can’t be so as the newly-weds can’t live without each other. We will soon supply water to the villages through other means. Narmada water had been brought from Bhavati to Anjrada and Osada and would reach 18 more villages in the next few days,” the minister said.

The scorching summer has made water a precious commodity. Most borewells have dried up in Raisen and Vidisha, once represented by Sushma Swaraj and Shivraj Singh Chouhan.

But now each tanker brings 1,000 litres of water every day and people wait for hours in queues.

“We have to wait in the sun for the water tanker to arrive; children fall sick but what can we do? Water is a basic necessity,” a resident, Geetabai, said. Her neighbour, Pushapabai, said water shortage is their biggest problem, yet all they have been getting is assurance only.

The water problem has hit urban areas hard too. In many localities in state capital Bhopal, the wait for water is endless .

Mamta Kushwaha stands in a long queue to take a handful of water for her family from a tanker of the Bhopal Municipal Corporation. Hundreds of residents like her near Mall in Bhopal don’t get clean tap water. “There is no tap water supply. Our work suffers because of the long wait for water tankers,” Ms Kushwaha said.

In November last year, Mr Chouhan scolded local officials after he got complaints of water shortage while on a tour of his ancestral village, Jait. “What is Jal Nigam doing? Water is not being supplied to my village. Is it my work to receive each application, and check each tap spout? I will review the situation after 15 days and you (officials) will not stay here if even a single complaint is received,” the Chief Minister had said.

“This is not the way. Is it the Chief Minister’s work to see whether water is coming from each tap?” he had said.

But not much seems to have changed. In April last week, Mr Chouhan called an emergency meeting at 6.30 am over water scarcity after coming back from his constituency at 1.30 am.