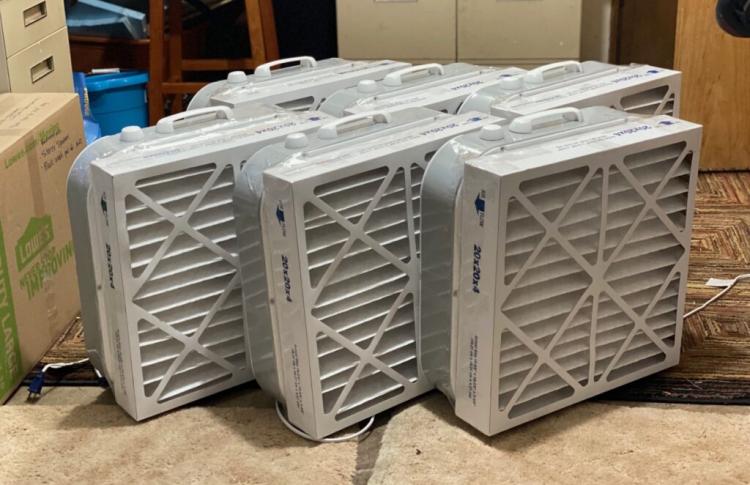 It’s no secret: The air quality is bad in Colorado this summer.

Thus far, the state has issued 59 Ozone Action Day alerts since May 31—the most in a single year since record-keeping began a decade ago. At least one day in August, Denver boasted the worst air quality of any major city in the world.

But what’s in that air?

Marina Vance in her lab at CU Boulder, before the COVID-19 pandemic. (Credit: CU Boulder)

“In the Front Range, we are mostly concerned about two types of air pollutants, especially in the summer: particulate matter and ozone. And then when you’re indoors, there’s now this extra concern about the COVID viruses spreading through the air,” said Marina Vance, an assistant professor in the Paul M. Rady Department of Mechanical Engineering who was awarded an NSF CAREER Award to study how pollutants transform as they move between indoors and out.

So how do we keep ourselves healthy?

“It can be overwhelming for people to figure out what the least risky situation is,” said Vance, who is also faculty in the environmental engineering program. “We’re hoping that with some simple measures, people can alleviate some anxiety that’s driven by this co-occurrence of the wildfires and COVID persisting.”

On high ozone days, go inside and shut the windows

First, ozone—it’s been a big part of this summer’s air quality warnings.

Ozone is a highly reactive gas that forms naturally in the Earth’s upper atmosphere, where it protects us by reducing the amount of harmful UV radiation that reaches the Earth’s surface. But when it forms closer to where we breathe, known as ground-level ozone, it can be harmful.

Notably, it’s not emitted directly by any air pollution source: It forms in a chemical reaction between volatile organic compounds (VOCs), nitrogen oxides (NOx) and sunlight, and can be amplified by hot temperatures. Colorado’s abundance of sunlight and heat, combined with VOCs emitted from numerous chemical plants and gasoline pumps (among other sources), and NOx emitted from power plants and motor vehicles—of which Colorado has plenty—makes it a particular hot spot for ozone.

This ground-level ozone doesn’t just gray our blue skies and obscure our beloved mountains. It doesn’t feel good to breathe. And studies suggest that chronic exposure to this pollutant can lead to lower birth weights, asthma and higher rates of premature death.

Vance’s advice for high ozone days: Stay inside and close the windows and doors.

“The ozone is so reactive it will react with the building exterior before it gets inside,” said Vance.

While VOCs can make their way indoors (no building is completely airtight), ozone cannot form indoors because windows filter out the UV light needed to catalyze the chemical reaction.

Can’t smell it? Don’t ignore it.

While the air quality is worse this year compared to last year, there’s one major difference: We’re not smelling the smoke.

This can lead people to underestimate just how bad the air quality is. If you wait until your eyes feel itchy, you start coughing, you smell it or see ash falling, you’re not paying enough attention, according to Vance.

“Relying on smell to detect air pollution can be really deceiving,” said Vance.

Alex Huffman, associate professor at the University of Denver, built these DIY box fans with MERV 13 filters, which protect against COVID-19, for his daughter’s preschool classroom. (Credit: Alex Huffman)

Smoke from wildfires as far away as California doesn’t carry its smell when it arrives in Colorado, but it can still carry particulate matter, according to Christine Wiedinmyer, associate director for science at the Cooperative Institute for Research in Environmental Sciences (CIRES) at CU Boulder.

And we know wildfire smoke can be quite harmful to our health, whether from near or far away, something studied by Colleen Reid, assistant professor of geography.

To check if smoke is at unhealthy levels, Vance recommends using airnow.gov. The overall Air Quality Index incorporates five major pollutants that are regulated by the Clean Air Act into its rating, including PM2.5: The term used for tiny bits of particulate matter in smoke which can be harmful if breathed in.

This regularly updated index ranges from “Good” to “Moderate” at the low end, all the way up to “Hazardous.” If PM2.5 or the overall rating is at “Unhealthy for Sensitive Groups” or above, it’s wise to take appropriate precautions inside and out.

To catch and filter wildfire smoke particulate matter indoors, Vance recommends first sealing up your house: Close windows and doors. If you live in a house, replace your furnace filter with a high quality one (MERV13 is a popular and inexpensive one). And if you have air conditioning, recirculate the indoor air within the house to further reduce particulate matter.

If living in an apartment or condo, she recommends purchasing a portable air cleaner, which often use high quality HEPA (high efficiency particulate air) filters, a type of pleated mechanical air filter. Keep the portable filter in the room you’re in.

If you don’t have central air conditioning or a window unit, and can’t keep doors and windows closed while indoors, Vance recommends a DIY approach. Place a high-quality furnace filter, such as a MERV13, on the intake side of a box fan blowing air into the room; then seal the window opening surrounding the fan. This will let outdoor air in to cool the room but filter out much of the particulate matter from wildfire smoke. Adding a portable air cleaner (with a HEPA filter) can help further reduce particulate matter and viruses within the room. However, this approach does not filter out ground-level ozone.

Build your own DIY air filter

Need a portable, affordable air filter that will do the trick in a pinch? Vance and Jose-Luis Jimenez, chemistry professor at CU Boulder and fellow at CIRES, recommend going the DIY route. These box fan filters are great for removing airborne virus particles and particulate matter from dorm rooms, offices and other small spaces—all for about $40.

Simply place the filter on the back of the fan (where the air comes in, not out) and make sure it’s facing the correct direction for air to flow through. Then tape the edges of the filter securely to the fan, creating a seal between the box fan and the filter. Find more information and a how-to video here.

If using this system to blow air in through an open window, Vance recommends only using it on days when it’s not too hot and ozone levels are not high, as this method does not filter out ozone.

Pay attention to more than one pollutant

What about days with high ozone and high smoke levels?

Be careful with what online tool you use, because it might be only telling you half the story, Vance notes. She recommends airnow.gov, which is based on good data from EPA air quality regulatory stations, and measures both ozone and particulate matter.

While Purple Air is a popular online site many reference, it does not measure ozone levels.

“The overall air quality index is only driven by whatever is the worst thing. But if both ozone and particulate matter are rated orange, that’s extra bad,” said Vance.

But we can take advantage of how these pollutants vary throughout the day. For example, ozone levels are higher in the afternoons and evenings. So if you can’t resist exercising outdoors, do it early.

Get clean air, no matter where

COVID-19 further complicates the equation, as spending time indoors with other people is something we’ve now been advised to avoid.

But fortunately, the same MERV13 or HEPA systems which filter out particulate matter from fires can also help catch and keep viruses out of the air. And when changing your filter, you don’t need to worry that it’s COVID-laden, because the virus is simply not going to survive on it, said Vance.

Either way, avoid ionizing bipolar, ionizers and UV light air purifiers at home—there’s no need for them, and some types of UV light can be harmful, said Vance.