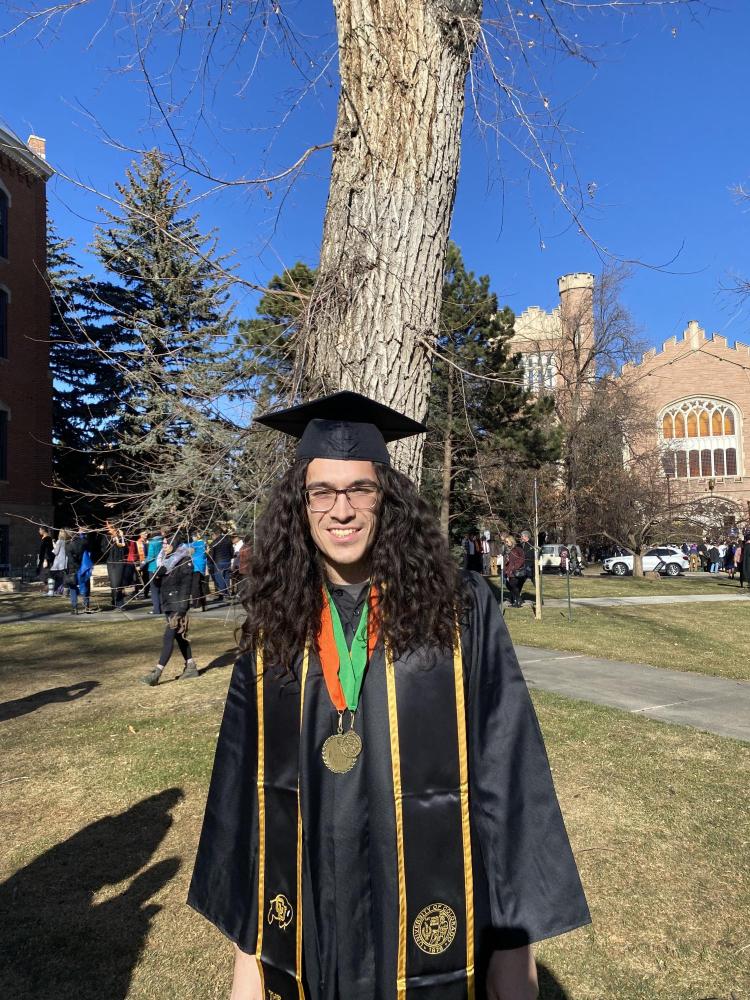 Anthony Pimentel (EVEN’21) was awarded one of three Research graduate awards His efforts have focused on new water treatment options and sustainable technologies to reduce the environmental impact of water infrastructure.

His path to research excellence at CU started with the college’s Discovery Learning Apprenticeship (DLA) program, which placed him in professor Karl Linden’s lab, which focuses on novel technologies for advanced water treatment.

Pimentel has presented at multiple conferences in the past year on a newer water filtering material and method that can stand up to strong disinfecting chemicals better than plastic filters can.

He will graduate with both an undergraduate and graduate degree in Environmental Engineering through the department’s Bachelor’s-Accelerated Master’s program, and he’s ready.

“I’m excited to graduate and get out in the real world and work with people to fix systems that need fixing.” Pimentel said.

Pimentel has known that he wanted to work with water since before he came to CU Boulder.

As a child growing up in Flint, Michigan he would wander through the warehouse of his mother’s plumbing business, surrounded by pipe fittings and faucets.

This was before the city started pulling water from the heavily polluted Flint river in the widely publicized ongoing Flint water crisis, and before the 2008 recession closed the business.

Pimentel’s father, a first-generation immigrant from Peru and software engineer, encouraged his son to consider engineering as a career, but Pimentel, who had only seen engineers work with cars and code, didn’t feel it was for him.

“I told him, ‘No, I don’t like math, I don’t like this.’ And it took some time. I took a year off after high school. Then I went down and lived in Peru.” he said.

In Peru, Pimentel started to see that “engineering problems” are often far from technical.

“The issues in Flint and Peru are largely political problems, systemic oppression, racial oppression, issues that are hard to understand,” he said.

“I want to encourage engineers to address problems that are technical but also multifaceted, and you need to have a holistic background to address those and to make change,” he said.

At CU Boulder, Pimentel himself worked to grow that holistic background through service and involvement. As a transfer student without a freshman group of friends, Pimentel regularly went to Engineering Launch, the college’s involvement fair.

Through the event he discovered Engineers without Borders, The American Society of Civil Engineers, the society for the Environmental Engineering department (SEVEN), the Society for Hispanic Engineers (SHPE) and other groups. He also found a home in the BOLD Center as a Student Success Center (SSC) tutor.

“Before CU Boulder, I took a year in community college and the courses weren’t easy for me. I was working twenty to 30 hours, as a lot of students do. I wanted to give back to those students who have come from similar backgrounds like myself, a lot of whom don’t have English as a first language.” he said.

Pimentel is valued for his services to the BOLD SSC.

“Anthony goes above and beyond in his work. He’s always willing to support his peers, colleagues and those in his community. You can always rely on Anthony to show up, creatively problem-solve, and engage in high impact work and initiatives to make a positive difference.” said Chantal Baca, BOLD Student Success Senior Professional.

Pimentel also said he values the BOLD Center for its student-oriented approach and programming. He said he believes the center is where many students from diverse backgrounds find friends and strengthen their personal and professional skills as engineers.

Looking to the future, Pimentel said he hopes his generation is the one that ensures people get access to basic services no matter where they live, what their income is or what they look like.

“Engineers are committed to providing the most basic and needed services to people. And with climate change and civil unrest, our infrastructure is at risk. We need further investment, but money doesn’t solve the issue. We need smart and resourced and diverse-thinking engineers succeeding and being motivated to go into the field and to solve issues, to build the future of this country and of the world.”  he said.