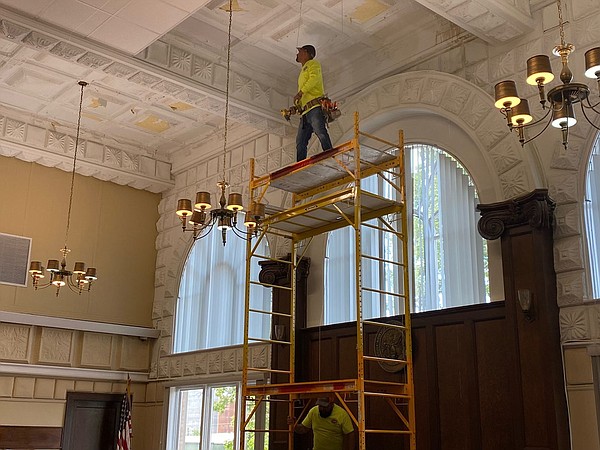 BENTONVILLE — Benton County is either finished with or working on several facility projects, from remodeling bathrooms to building a temporary parking lot downtown, a county official said.

Upgrades are underway to the 22-year-old bathrooms in the judicial tower downtown. The tower is sandwiched between the historic courthouse and old jail.

There are restrooms in the tower behind the Sheriff’s Office deputy station on the first floor. Those were added when the new Division 7 courtroom and main courtroom entrance off East Central Avenue were put in last year, Beeson said.

The Quorum Court appropriated $378,355 in American Rescue Plan money for the bathroom project, which should be done by the end of October, Beeson said. Legacy Construction of Springdale is the contractor.

Installation of a new air purification system for the three-story County Administration Building is complete, Beeson said. The building didn’t previously have such a system, he said. The Quorum Court spent another $152,104 from rescue plan money for the system.

The county received $27 million last year and will get another $27 million this year as part of the American Rescue Plan.

The county also recently fixed a problem in Circuit Judge Robin Green’s courtroom on the third floor of the historic courthouse downtown.

The ceiling in Green’s courtroom was installed in 1940. It’s an ornate/insulated ceiling that helps reduce noise in the courtroom. The ceiling over the years has deteriorated with paint flaking off, Beeson said.

A “drop” ceiling was put in under the area where deterioration is more prevalent. The work took one day, cost $1,800 and came out of the facilities maintenance operating budget, Beeson said. Another eight drop-section panels will be installed to cover the entire old ceiling, but a time frame to do that has not been determined, he said.

The county also will need to contend with sewer work in the Courthouse Annex where Circuit Judge Brad Karren holds court. The building, once a U.S. Post Office, was built in 1935.

“The city water service water line coming into the building is undersized and 50-plus years old,” Beeson said. “When the building has a jury trial or large docket of individuals in the building, the restrooms, urinals and sinks have very low water pressure, causing the restroom fixtures to not work properly.”

The bathrooms remain in use.

A new waterline will need to be installed from the city water meter into the back of the building, to the basement, then to the main water service line in the building. The repair is expected to cost $30,000.

Money will come from the 2023 capital budget request, Beeson said. Justices of the peace will start to discuss next year’s budget next month.

The Road Department will do the work on a temporary gravel parking lot at 207, 209 and 215 N.E. Second St. The lot will be northwest of the administration building.

The Bentonville Planning Commission approved a conditional-use permit for temporary parking at its Sept. 6 meeting. The permit is good for two years.

The lot will be needed when work starts on a new parking deck at 300 E. Central Ave., south of the administration building. That area is now a paved lot county employees and others use for parking. It contains 96 spots, Beeson said.

Plans for Off Street Parking Development District No. 3 show a 46-foot-tall, mixed-use parking garage. The development will include 1,585 square feet of retail space and a 167,806-square-foot parking garage with 456 parking spaces, according to planning documents.

The parking garage also will be used by a new downtown hotel to be built to the west through an agreement with the Off-Street Parking Development District. The municipal improvement district isn’t governed by the city or county.

A construction timeline for the parking garage hasn’t been established. Entry will be off East Central Avenue and Southeast B Street.

The gravel lot will not have restricted access and also will be open to the public, according to planning documents. The county doesn’t own the property, County Judge Barry Moehring said. The goal is to get 54 parking spaces on site, he said.

Josh Beam, chief county engineer, said the county is waiting on a final permit from the city to start work. The work timeline is estimated at a little over a week. County crews will put down gravel and the parking blocks that will delineate the spots. A cost has not been established, he said.

The county will build and maintain the lot during the conditional-use period, Bee-son said.

Bentonville Revitalization Inc., the applicant for the conditional use, already has cleared the lots of structures, Beam said.

Mike Jones can be reached by email at [email protected] .