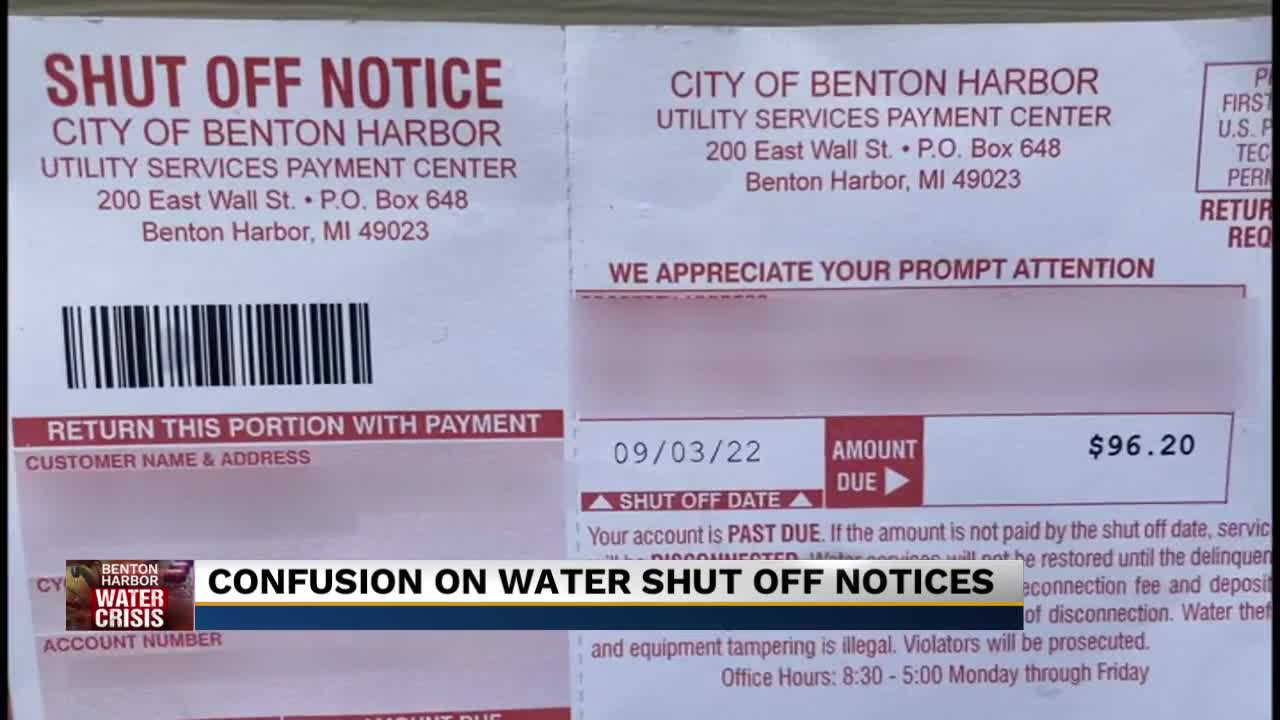 BENTON HARBOR, Mich. — As crews continue to replace the lead water lines throughout Benton Harbor, some residents have been receiving water shut off notices for non-payment, even though there is a moratorium on all disconnections.

One disabled resident, Alphonso Lewis, reached out to ABC57 for help when he received a water shut-off notice over Labor Day weekend. He wanted to know why he got a shut off notice for non-payment for water he can’t use.

Crews have started work on replacing his old underground lead water service line, and those nearby as part of the long-term solution to the Benton Harbor water crisis.

Even though his lines have been replaced, residents can’t use the water for drinking or cooking until all contaminated service lines are replaced throughout the city.

“Why do I have to pay for something I can’t use?” Lewis said.

The 56-year-old cancer survivor, who walks with a cane, showed ABC57 his recent city water bills and the shut off warning for an outstanding balance of $96.20.

What did he think when he got the disconnect notice?

“I thought it was wrong. Receiving a disconnect notice, I don’t think it’s fair at all,” Lewis said. “You can’t do nothing with it, you can’t cook with it do anything with it.”

Benton Harbor Mayor Marcus Muhammad said the city stopped all residential and commercial water shutoffs during the coronavirus pandemic, and that moratorium remains in effect during the ongoing lead contamination crisis.

“There’s still usage but we didn’t want any resident to have their water cut off,” Muhammad said. “We’re in tough times but the resolution to put a moratorium on all shut offs was put in place in 2020.”

He admitted the automated city water billing system is still generating disconnect notices and sending them out to people even though legally no one is actually getting cut off.

“The system is supposed to work that way,” Muhammad said.

He wants Lewis and all other frustrated city water customers to know they still have to pay for the water they do use. Residents also got more than $300 toward their water bills on February 1 of this year.

“We’re working with residents to make sure that their water stays on and that they can manage their situation,” Muhammad said.

Lewis needs safe, clean water because of his health concerns. He’s happy to see progress being made with the lead pipe replacement project.

“I’m glad something is happening because it has been like that for a while now,” Lewis said.

The mayor says he still hopes the state or federal governments will come up with money to help cover water bills in cities like Benton Harbor, Flint and now Jackson, Mississippi, until every home in every block has safe drinking water.

“This problem is happening all around the country. I’m happy that Benton Harbor, we’re through the eye of the storm. We’re at the end of it, but we want to continue to drink the bottled water for cooking, brushing your teeth out of an abundance of caution until we can get every lead line changed out,” Muhammad said.

The work to replace all the contaminated lead pipes is now 90% complete.

Only 445 of the nearly 4,500 contaminated lead service lines still need replaced. The deadline is set for next May.