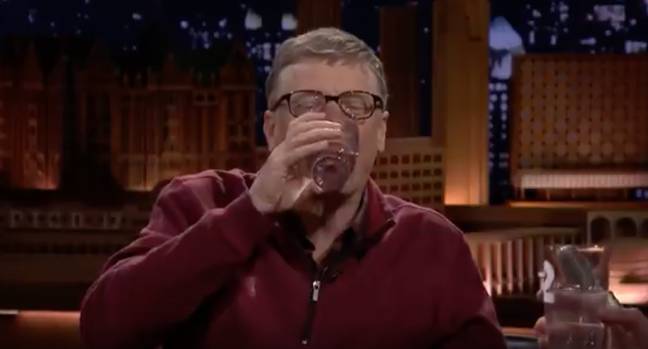 Bill Gates has admitted he’s done some ‘weird cr*p’ in his life, from drinking ‘water from faecal sludge’ to sharing a stage with human faeces – all for a very good cause, of course.

The 67-year-old billionaire reflected on some of the stranger things he’d done in a LinkedIn post marking World Toilet Day yesterday (Saturday 19 November) – like THIS time he challenged Jimmy Fallon to taste test water from The Bill and Melinda Gates Foundation’s Omniprocessor, which turns sewage into clean drinking water:

Gates wrote: “I’ve done some weird crap over the years: I drank water from fecal sludge with Jimmy Fallon, shared the stage with a jar of human feces, and smelled pit latrine odor.

“These antics got a few laughs, but my goal has always been to get people to care about an issue that impacts 3.6 billion people: poor sanitation.

“Thanks to scientists and engineers from around the world, we’re getting closer to new solutions that will prevent disease and illness.”

Gates then linked to a July 2021 blog post he’d written, outlining the rise of unsafe sanitation as the world’s population continues to increase.

In the blog post, he had explained how, 10 years previously, the Bill and Melinda Gates Foundation had ‘challenged the world to reinvent the toilet’.

To raise awareness of the campaign, he took part in a variety of public stunts, such as sharing a stage with a jar of human faeces, taking a giant whiff of pit latrine odour and drinking ‘poop water’ in a TV interview – and even convincing Fallon to do so too.

“About 3.6 billion people – nearly half of the world’s population – lack toilets or use unsafe sanitation,” Gates said.

“Living without a toilet is more than an inconvenience. It’s dangerous. Unsafe sanitation means contaminated water, soil, and food. It causes illness and death.

“According to the latest estimates, diarrhea and other sanitation-related diseases kill nearly 500,000 children under the age of five every year.

“As the world gets more crowded, the human toll of unsafe sanitation will only increase. The United Nations estimates that between now and 2050, the world’s population will grow by two billion people. More than 90 percent of that growth will be concentrated in cities and in developing countries – places that are least likely to have good sanitation.”

Gates said the Covid-19 pandemic had served as a ‘powerful reminder’ of the work we must do to contain and treat deadly pathogens, but added how the sanitation crisis ‘can be solved’.