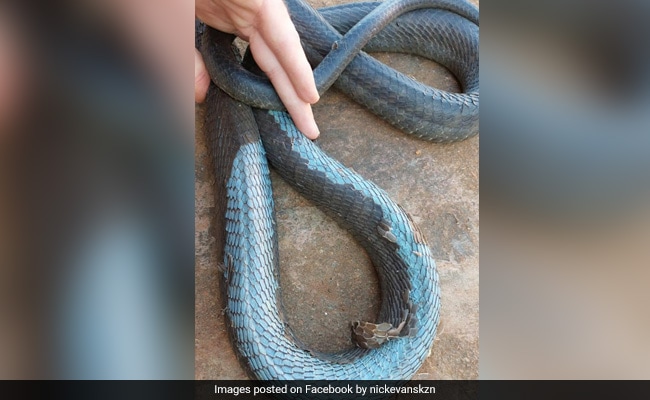 The family sprinkled disinfectant all around the house to scare the snake away.

A black mamba, among the most venomous snakes in the world, was caught slithering across the living room of a terrified family before making its way into one of their bedrooms in South Africa, according to a report in Newsweek.

The family members were sitting on the couch beside their house’s front door when the snake entered their house. After spotting the mamba, they fled the home out of fear and contacted snake catcher Nick Evans who arrived at the scene in Maphephetheni, North Durban.

According to Newsweek, black mambas are difficult to catch as they can slither at speeds of up to 12.5 miles per hour and reach lengths of up to 14 feet. They also have a quarter-inch-long set of fangs.

The venom that comes out of the mamba’s fangs, starts to show its effect within 10 minutes of the bite. The tingling sensation at the site of the bite soon gives way to miosis, ptosis, blurred vision and in extreme cases loss of consciousness as the venom’s potent neurotoxins quickly begin destroying the body’s tissues.

The mamba may produce a threat display when it feels threatened, opening its black jaws and flicking its tongue.

The snake can be startled by unexpected movements from the threat, which would make it strike quickly and often. Its poison just takes two drops to kill an adult human, according to experts.

The family sprinkled disinfectant all around the house expecting that the smell would scare the snake away and make it depart the premises. When Mr Evans Evans arrived, the family was gathered in front of the house to see if the snake would leave through the windows or doors, the Newsweek report said.

The snake catcher shared a Facebook post in which he said that the mamba wasn’t under the bed. “I looked around the room, and the wardrobe was the next best bet, I thought. I shone my torch in, and I could see a coil of its body sticking out,” Mr Evans further said.

When he moved things around, the unhappy mamba tried coming out, said Mr Evans, adding that he quickly grabbed it.