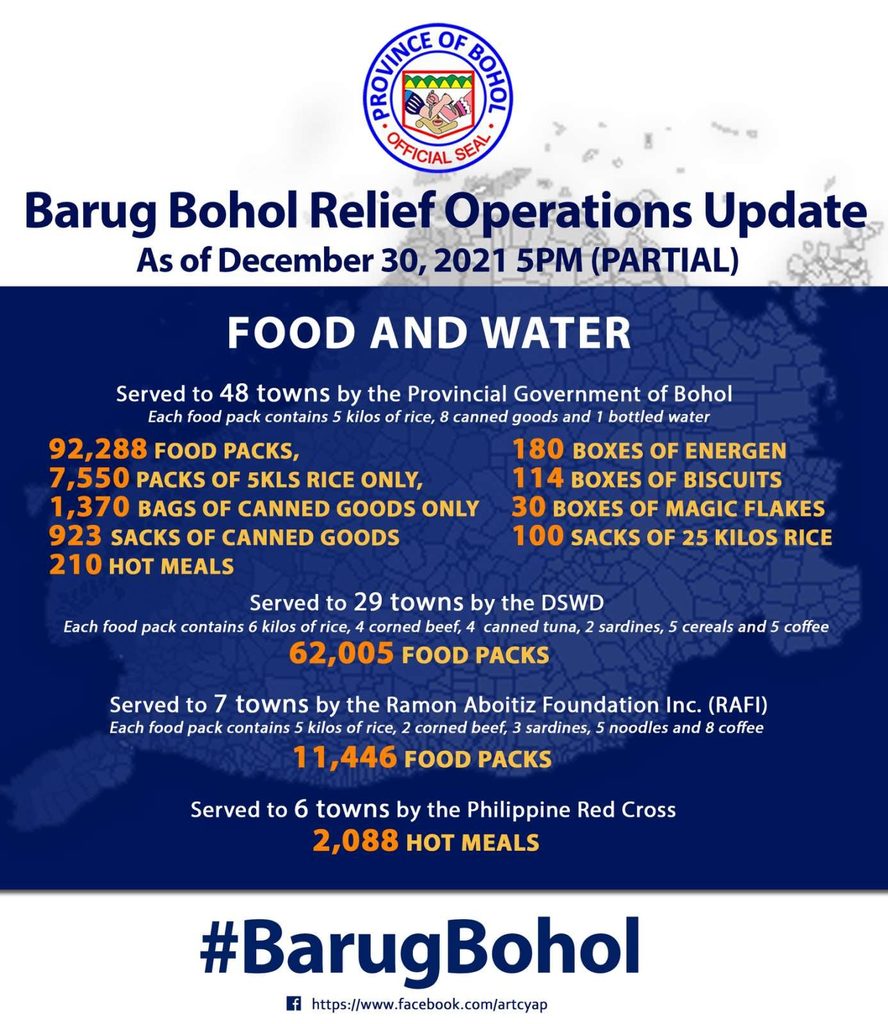 Governor Arthur Yap announced on New Year’s Eve the expected arrival of 40 generator sets and assorted solar lamps from the Energy Development Corporation of the Lopez Group on Saturday, January 1.

Yap thanked rehabilitation and relief crews that worked through the year-end holidays, from December 30 to the New Year.

The governor said the equipment can process 1,000 liters of clean water every hour through 11 stages of treatment and can run straight for two hours before recharging.

MMDA volunteers, who have been in Bohol for more than a week now, also undertook water purification in the town of San Miguel and clearing operations across the province, Yap said.

Troops from the Army’s 47th infantry battalion have also worked through the holidays to unload and deliver relief goods from the national capital region.

The December 30 to January 1 supplies will augment the previous food aid sent by the provincial government, the Department of Social Welfare and Development,  the Ramon Aboitiz Foundation Inc., and the Philippine Red Cross.

Various Philippine National Police units in the province, he added, have worked nonstop at clearing operations. ROAD CLEARING. Police clearing a road in Bohol to open up a second lane. Photo courtesy of Governor Arthur Yap

Yap, in a New Year video on his Facebook page, said 2021 was an especially challenging year for Boholanos because of the COVID-19 midyear surge and Typhoon Odette’s December 16 rampage.

“With COVID-19, we could avoid infection if we followed regulations. But we had nowhere to run when Typhoon Odette came,” Yap said. “We were all hit. Officials and residents, we are all victims.”

The governor said he understands that Boholanos are weary of disasters but urged them to unite.

“There is hope and we will overcome,” he said. “I cannot solve all these problems, but I will not stop seeking solutions. Will you be part of the problem or part of the solution?”

Earlier, the governor announced that the Department of Trade and Industry (DTI) had sent out 64 show-cause orders by December 30 to supermarkets and groceries for violations of freeze on prices of staples.

At a December 30 press briefing, the governor expressed thanks that initial fears of potential looting did not happen. – Rappler.com