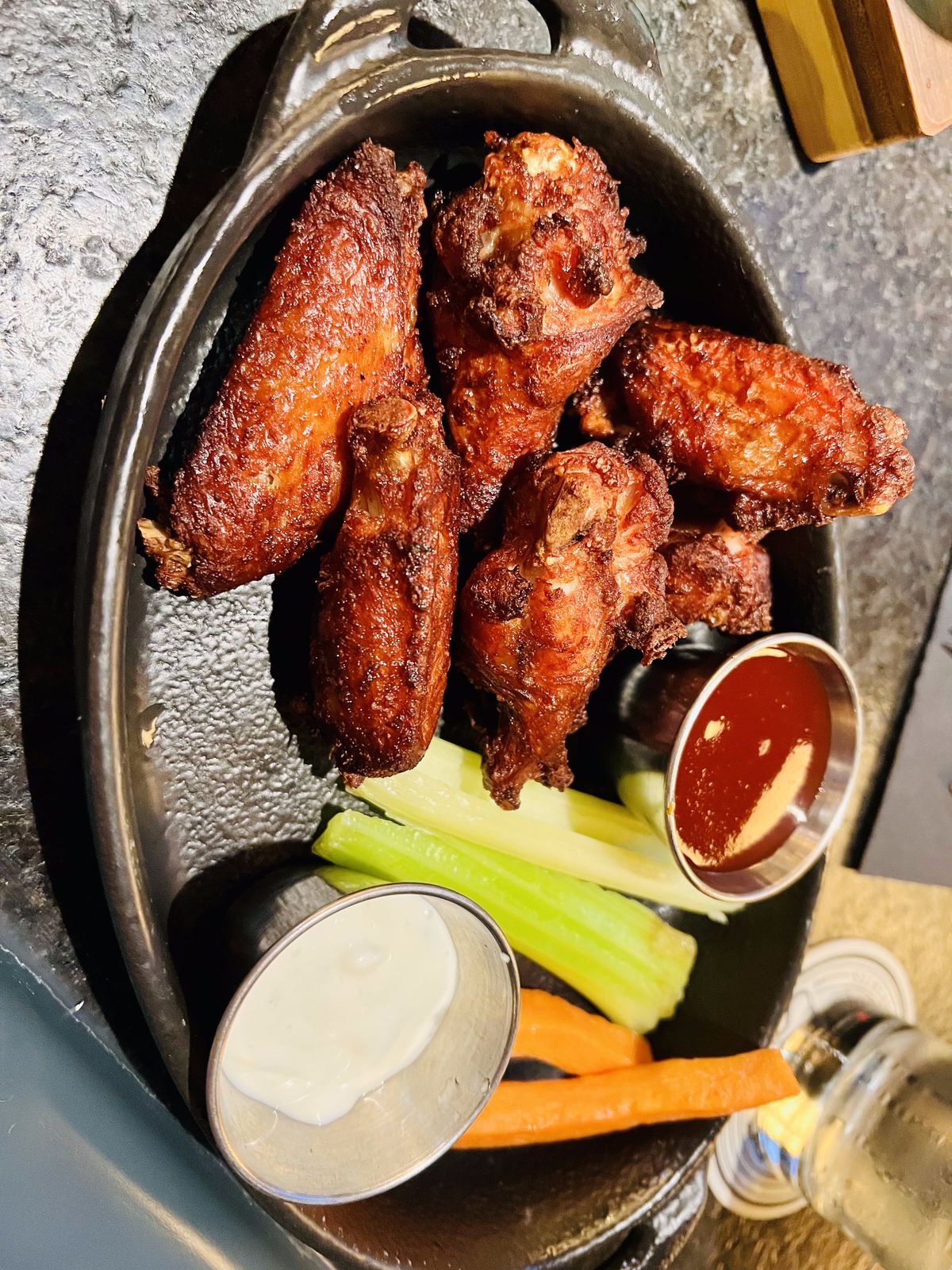 Jon Taffer, the spirited reality TV star known for his tough love, no-nonsense approach to the bar business, is as confident a restaurateur as they come. Speaking recently by phone from North Carolina, where he was shooting new episodes of his decade-old Bar Rescue makeover show, Taffer proudly sums up his first D.C. venture in one surprising word: “mainstream.”

“It’s not themed. It’s not trendy. It’s not over hip,” he says. There’s also no doubt it’s his brand, starting with a framed portrait of a smiling, whiskey neat-holding Taffer above an electric fireplace upon entry (not to mention for-sale swag and mosaic floor tiles spelling a big “T” just past the door). Brick-framed Taffer’s Tavern debuts on Thursday, September 1 (700 6th Street NW). It’s the second in the U.S., following a 2020 debut in Alpharetta, Georgia, with another opening near Boston next week.

“The environment is intimate and warm,” he says. “It’s the kind of place you’d enjoy being every day.”

Diving into the hearty menu daily would be quite the challenge. Pub fare highlights include pork belly skewers, tots topped with shredded beef, cheese curds, and rich mushroom béchamel sauce, fish and chips, and an enormous au jus roast beef sandwich that competes in size with a heap of fries. Wedge salads and pleasing flatbreads lighten up the load, and local ingredients like sausages and produce is used when possible.

In contrast to acclaimed dining rooms and tasting tables around D.C., Taffer’s fast-growing casual franchise enters the crowded comfort foods fold with a tech-savvy edge. Meats are cooked sous-vide, a culinary technique favored by chefs for its consistency and flavor. The short rib entree, for example, goes in a vacuum-sealed bag before spending nearly 70 hours inside a heated water bath.

The sous-vide process is overseen in partnership with Northern Virginia-based Cuisine Solutions, whose chefs prepare the proteins off-site before handing them off to the Taffer’s Tavern kitchen for final touches like searing, crisping, and plating. The arrangement is part of a highly-automated kitchen that eschews typical equipment like a traditional stove in favor of more efficient methods like infrared ovens.

“We do anything any other kitchen would do,” Taffer says. “We just do it in a more high technology way.” 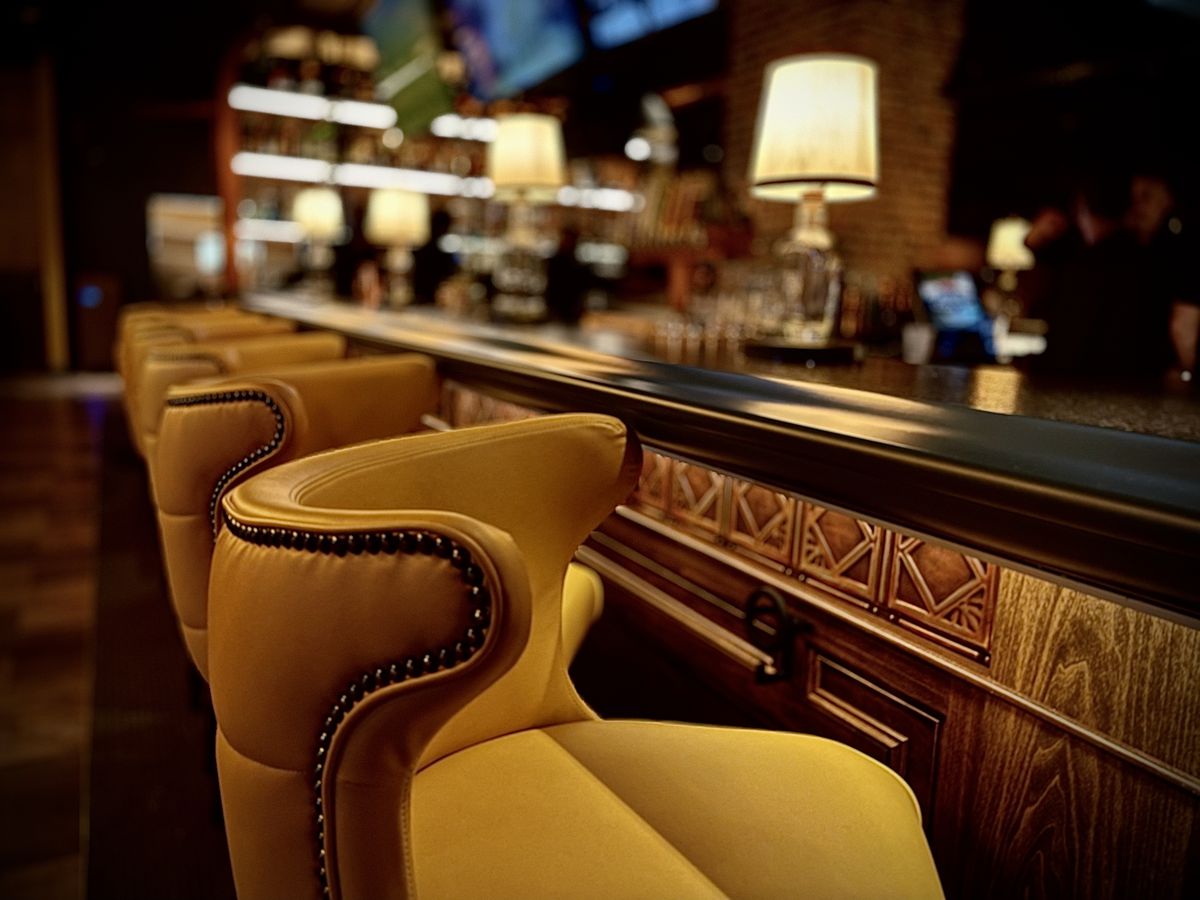 A big wooden bar scores points for comfortable seating and outlets and purse hooks in reach. 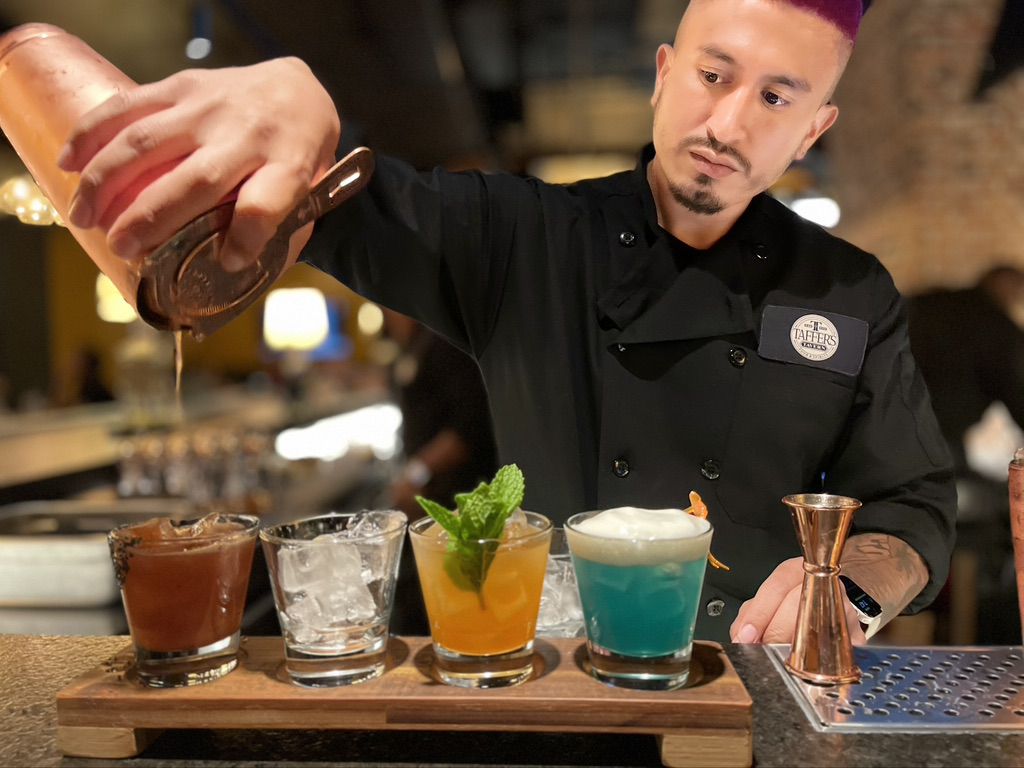 A $20 “Taffer’s Tasters” board lets patrons sample its four most popular cocktails at once.

Taffer says the innovative setup reduces his back-of-house labor costs by 50 to 60 percent, eliminating much of the staffing bottlenecks that plague other restaurants.

“We now have the labor resources to make sure the front of the house is really staffed well,” he says. 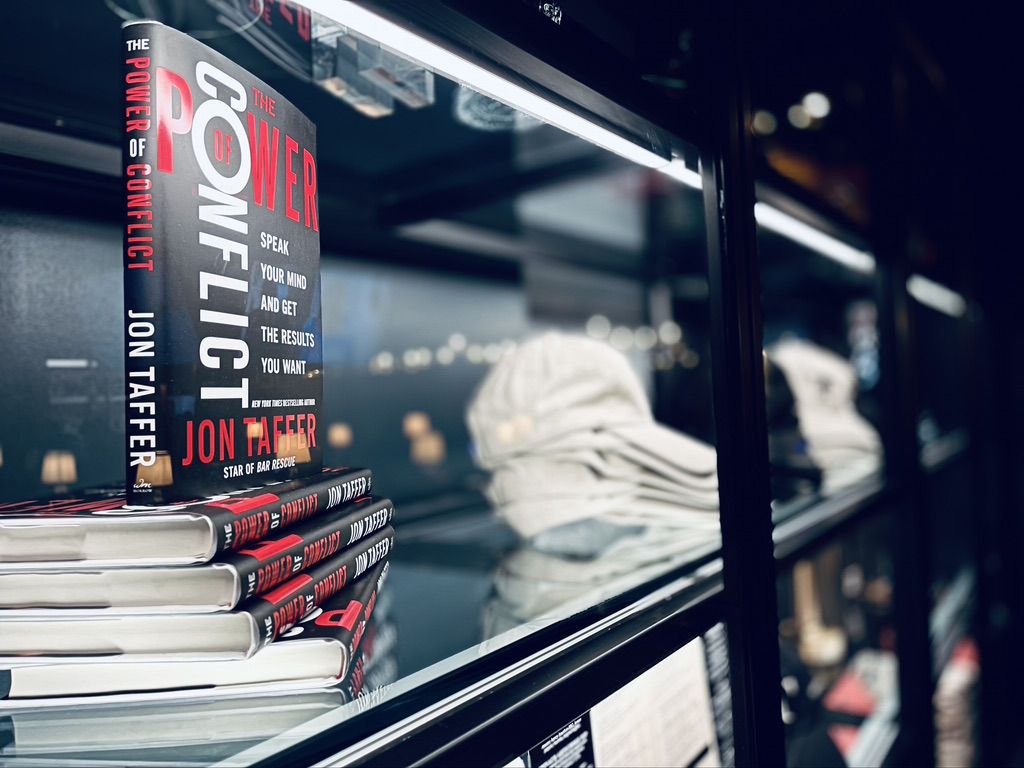 Jon Taffer pushes his books near the host stand next to hats and shirts with the tavern’s “A Bar Is A Bar, But A Tavern Has Soul” motto.

A polished bar looks much like one he might’ve rescued in the past, winning points for soft mustard-colored seats with back support, local beer pours in glasses straight out from the freezer, and bartenders handling attractive copper shakers with ease. The sprawling former home of Penn Commons got old-world tavern makeover with green velvet banquettes, brown plaid patterned walls, and emptied whiskey bottles repurposed into chandelier-shaped light fixtures.

Taffer’s personal favorite sipper takes tips from the kitchen. The Campfire starts with a base of rye whiskey combined in a sous-vide bag with browned butter. The mixture is sealed and boiled for four hours before being removed and refrigerated, allowing the butter to come to the top. 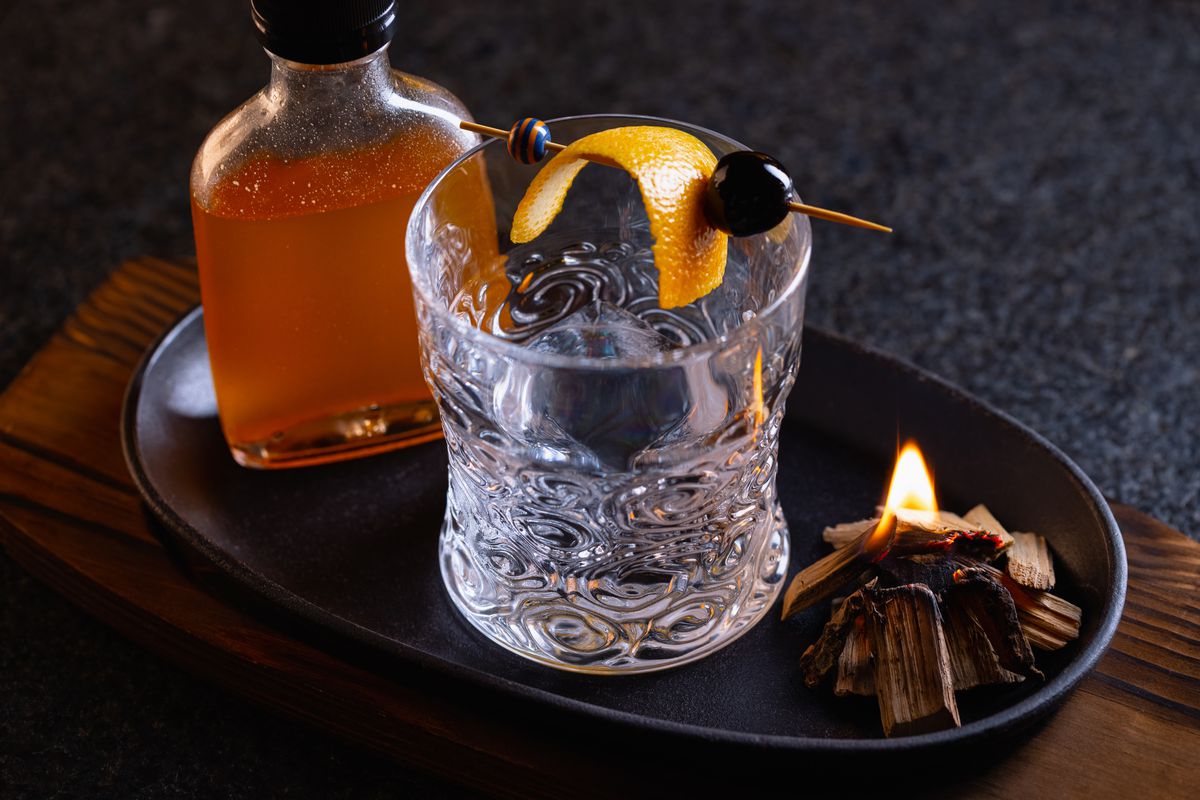 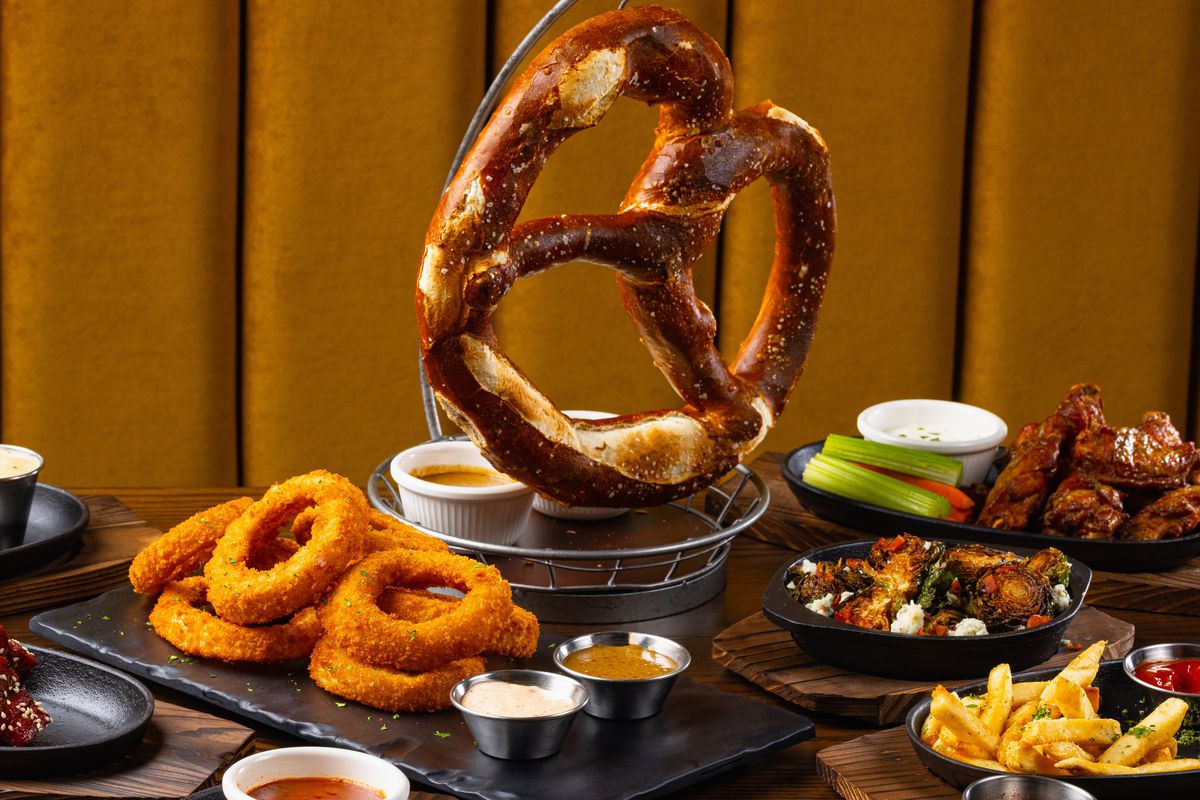 The loud hospitality vet, seemingly undeterred by skeptics of his flashy D.C. entrance, makes a brazenly bold (albeit on-brand) statement: “We don’t believe that there’s a more beautiful, more appealing or just better overall cocktail program in the city.”

“We’ve all been through a life-altering event. And that event has left us with different view points,” he says.

Cleanliness is a priority, with bacteria-scanning hand sensors required for employees along with frequent disinfecting of surfaces. A curated “Tavern TV” station airs random videos and facts on loop like, “because of Happy Meals, McDonald’s is the largest toy distributor in the world.” Big screens will also air sports, one would hope, with Capital One Arena next door.

An in-the-works brunch menu will roll out once lunch and dinner service are up and running smoothly.

Taffer’s opening advice to himself, while boilerplate, goes back to the basics: offer consistent and professional food, drinks, and service.

“When you start putting all those pieces together you’ve got something pretty special — that’s what Taffer’s Tavern is,” he says.