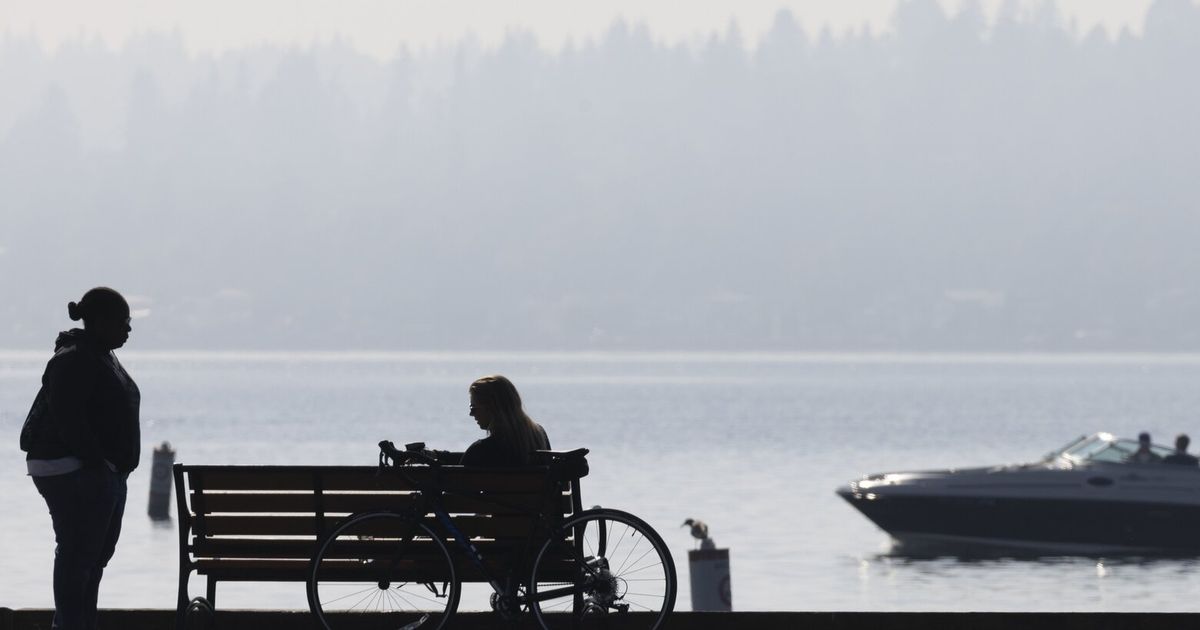 It’s October. In a typical year, the first rains of fall would have already arrived.

Instead, nine large fires are burning throughout the Northwest amid one of the driest stretches on record.

And this weekend, air quality may reach “unhealthy” levels for all population groups in the Puget Sound area.

Friday night, stronger offshore winds are expected to carry smoke from the Bolt Creek and White River fires into the greater Puget Sound area. It may carry farther west and south to Kitsap and Pierce counties and will likely hang around through Sunday night.

Because of the easterly winds and low humidity, wildfire meteorologists are anticipating fire spread on Bolt Creek, Nakia Creek and Siouxon fires. The National Weather Service issued weekend red flag warnings for Oregon and Washington around the Cascade Mountains. Those will remain in effect from 11 a.m. Saturday through 5 p.m. Sunday.

While smoky skies in October in Eastern Washington may not be unprecedented, it’s a rarity west of the mountains, said Susan Woodward of the state Department of Ecology.

Unlike previous fire seasons, where smoke may have hung over the region for a few consecutive days, the wind patterns have been bringing intermittent smoke into the lowlands this fall.

The Compass Housing Alliance in Seattle will offer overnight shelter throughout the weekend to provide people relief from the smoke, the King County Regional Homelessness Authority said Friday.

The center, located at 77 South Washington St. in Pioneer Square, will be open 24/7 starting at 9 a.m. Saturday through Monday morning. Sixty beds will be available for overnight stays and all meals will be provided.

Dr. Catherine Karr, professor at the University of Washington who specializes in pediatric environmental medicine, said kids who breathe in wildfire smoke could experience chest pain and tightness, trouble breathing, irritation or a burning sensation in their nose, throat and eyes. They may develop a cough.

Kids with asthma, allergies or chronic health issues and infants are especially sensitive to irritants like the compounds in wildfire smoke.

That’s in the short term.

“One of the things I think about as a pediatrician is whether this affects the sort of normal growth and function of lungs of children,” Karr said. “Children’s lungs grow really rapidly… if there’s some exposure to air pollution that compromise that, their ultimate adult level function isn’t what it’s supposed to be.”

Karr recommends people keep an eye on regional air quality databases to assess their level of risk when heading outdoors.

People most likely to be affected by the health threats of smoke include those who have heart disease, or lung diseases like chronic obstructive pulmonary disease or asthma; children; and those who are pregnant, according to the U.S. Centers for Disease Control and Prevention.

Meanwhile, temperatures are expected to rise to the mid- to high 70s Saturday and Sunday.

That’s after Seattle reached 70 degrees on Friday, totaling nine days in the month of October where temperatures have reached or exceeded 70. According to the National Weather Service in Seattle, that exceeds the previous record of eight days in 1987 and 1991. This includes both Seattle-Tacoma International Airport and downtown data dating back to the mid 1890s.

The next chance of rain is not forecast for at least another week.

While the smoke may seem especially bad this year, “the concentrations of smoke that we have seen, have not been consistently as high as we got in 2020,” said Phil Swartzendruber, air resources specialist for the Puget Sound Clean Air Agency. “That was the era we had a stretch that was really quite exceptional.”

Washington saw the least acres burned in a decade this year and that comes after the second- and third-worst fire seasons on record in 2020 and 2021.

Last week, state Commissioner of Public Lands Hilary Franz announced that just over 140,000 acres have been touched by wildfires to date.

But fire season isn’t over.

For Edgar Franks, Washington State Campaign and Political Director for the independent farmworkers union Familias Unidas por la Justicia, the late-season smoke has been a stark reminder of the disparities in workplace safety conditions for outdoor workers.

In mid-September the air quality was deemed unhealthy for sensitive groups, but farmworkers in Whatcom and Skagit County continued to work 10-12 hours in the fields, according to Community to Community Development, an organization focused on food sovereignty and immigrant rights.

Late this summer, Franks’ organization and others called on Gov. Jay Inslee to declare a climate emergency and mobilize state agencies to ensure the health and safety of farmworkers.

The weekend will also be a busy one for Seattle sports fans. The Mariners, Seahawks and Huskies all have home games. The teams say they are monitoring forecasts but that the games are expected to go on as scheduled.