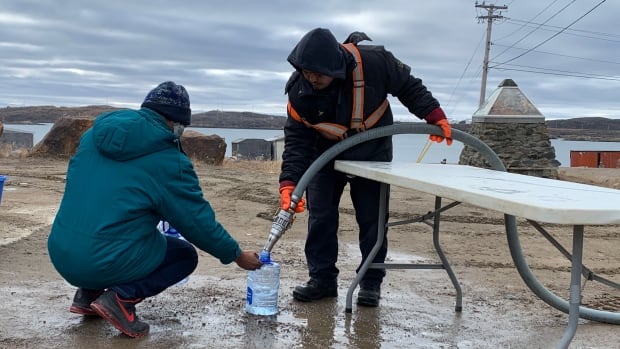 Calls are mounting in Nunavut for the territorial government to call a public inquiry into the Iqaluit water crisis.

The city of nearly 8,000 went for two months without clean tap water last fall after hydrocarbons were detected in the water and ultimately traced to the city’s water treatment plant. The do not consume order was lifted in December, after a bypass had been set up at the plant, only to result in a boil water advisory that lasted nine days earlier this month, as residents again reported the smell of fuel in the water.

At the start of this year, officials with the government of Nunavut said they wouldn’t call a public inquiry — despite pleas during Nunavut’s election campaign from Iqaluit-Manirajak MLA Adam Arreak Lightstone, who later became a cabinet minister.

Speaking with As It Happens host Carol Off on Jan. 20, Nunavut Member of Parliament Lori Idlout said a public inquiry is necessary.

“It was unfortunate that [the government of Nunavut’s] response was that they didn’t think it was necessary. And I think this current boil advisory, based on what happened last week, now shows that it is required,” Idlout said.

“I think people deserve to be informed in a public way,” Idlout continued in a separate interview with CBC News.

“I think when the second boil advisory happened, it just made it seem like it became necessary to try and understand what happened, and to make sure the public is informed with what’s going on.”

The government of Nunavut is instead moving toward a third-party review behind closed doors. Idlout acknowledged depending on the level of information made public from the review, a public inquiry may not be necessary.

‘Shrouded under a cloud of doubt’

Iqaluit-based lawyer Joseph Murdoch-Flowers — a former justice of the peace with the Nunavut Court of Justice — also issued a call for a public inquiry on Twitter on Jan. 20.

“For the sake of transparency, accountability, and to regain the highest degree of public confidence in the territorial and municipal governments, the Government of Nunavut should call a public inquiry into the Iqaluit water crisis,” Murdoch-Flowers wrote, adding he sent his thoughts to eight of Nunavut’s elected officials — including Idlout — and Nunavut’s Senator, Dennis Patterson.

A Public Inquiry is, as the name suggests, public. It is independent. It is governed by a Commissioner with the power to subpoena people and documents. It allows for the participation of interested parties. Its findings are entirely made public.

“Without a public inquiry, any third party review of the Iqaluit water crisis will be shrouded under a cloud of doubt. It will not allow for the participation of interested parties in the investigation.”

Government not ruling it out

Nunavut Premier P.J. Akeeagok responded to Murdoch-Flowers five days later, reiterating the government’s intent on proceeding with an independent third-party review in conjunction with the City of Iqaluit.

“The findings of this review will be important as they will inform any next steps and/or the need for further inquiry,” Akeeagok wrote.

I have received a reply from Premier @j_akeeagok to my call for a public inquiry into the #Iqaluit water crisis. I am surprised and grateful for such a prompt response. pic.twitter.com/3Zsi4iAvMy

Nunavut Justice Minister David Akeeagok echoed the Premier’s letter in an interview with CBC News, adding the government hasn’t ruled out the option of a public inquiry.

The sentiment is a change in tone from the government’s messaging earlier in January, where health officials said they would not be considering a public inquiry into the water crisis.

David Akeeagok insisted the messaging hasn’t changed, although a statement from his office three weeks ago said he would not be calling a public inquiry, given the forthcoming review from the health department.

“This is one of the tools we have. If we need to, we’ll go there,” David Akeeagok said, adding their focus is to first finish dealing with the water crisis.

“So yes, if the review was done, I’m sure it a lot of it would be duplication. But that’s why I’m waiting for [the review].”