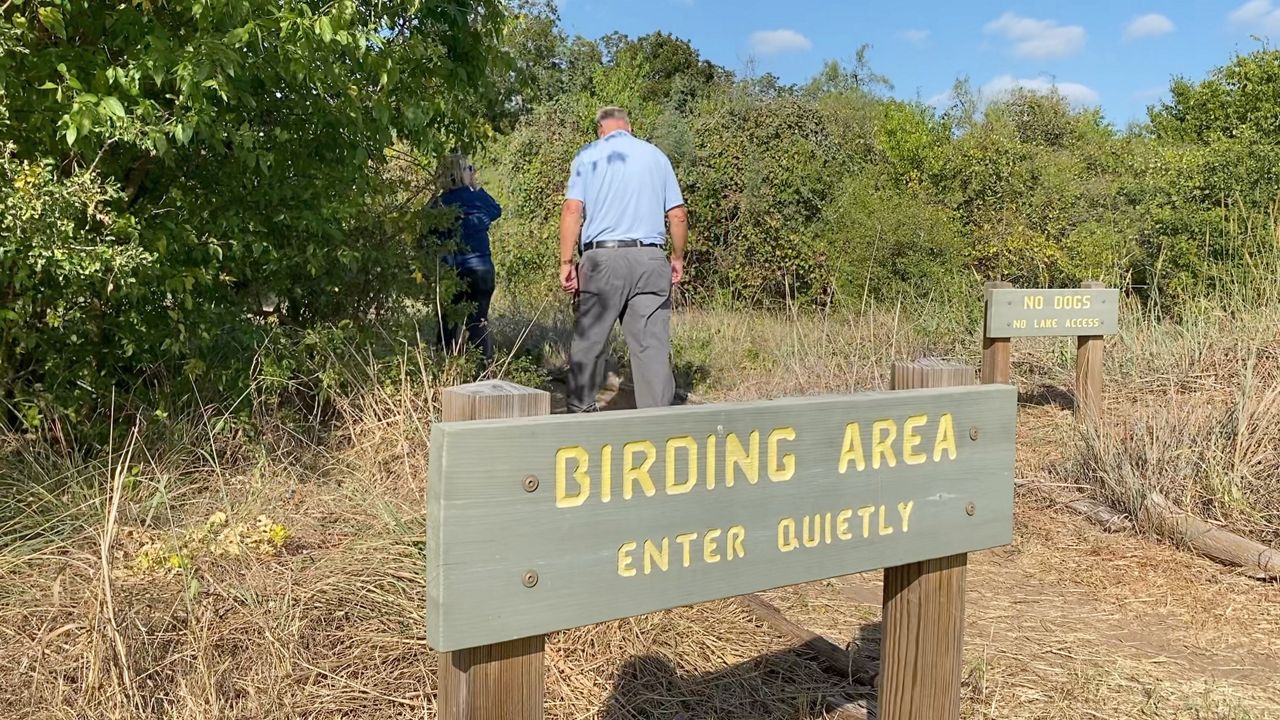 AUSTIN, Texas — For Nicole Netherton, executive director of the Travis Audubon, fall is as enjoyable a season in Central Texas as any, especially if you love birds.

“We sit on the Central Main Migratory Flyway so we have lots and lots of birds moving through,” Netherton said. “October tends to be the peak of migration in our area.”

Located on the Central Migratory Flyway, millions of birds will move to and through Texas this month as they travel South for the Winter. (Spectrum News 1/Dylan Scott)

Many bird experts will attest, it has been quite the journey to and through Texas for hundreds of species this year.

“Nature is telling us there’s a problem, and it’s time to seek balance,” Netherton said.

For millions of these weary travelers, it’s a bit more challenging than long lines at the airport. Not only are these animals covering hundreds or thousands of miles — but also dealing with continuous habitat loss, drought conditions, the danger of outdoor cats and light pollution to get to their final destination.

“If you turn your lights off overnight between 11 p.m. and 6 a.m. you’re helping tremendously,” Netherton said. “Lowering the amount of light pollution and glow in the night sky, which will help migratory birds as they go through.”

There are dozens of birding area’s throughout Central Texas such as Commons Ford Ranch Metropolitan Park in Austin. (Spectrum News 1/Dylan Scott)

Bill Gibbs, executive director for the Clean Air Force of Central Texas, adds to the issue for animals taking flight, saying increased ozone issues and air pollution are among the highest levels in years.

“If you think about it, birds have very tiny little lungs and they’re cycling through a lot of air in a hurry,” Gibbs said. “If they’re breathing the polluted air and flying right through it, they’re outside all the time and have no real respite.”

The American Bird Conservancy reports nearly three billions birds have perished in the past 50 years. Conservation efforts, especially during migration periods, will be essential to their survival efforts. Here in Central Texas, aiding in the resource for cleaner airways is one way to help birds headed South.

Hundreds of species of birds from across the country and continent can be spotted during the Fall season in this region. (Spectrum News 1/Dylan Scott)

“Go the speed limit,” Gibbs said. “Every time you go faster, you’re burning more fuel and producing more pollutants. Fill up your tank at night, not in the morning on the way to work because that’s when the chemicals start to brew.”