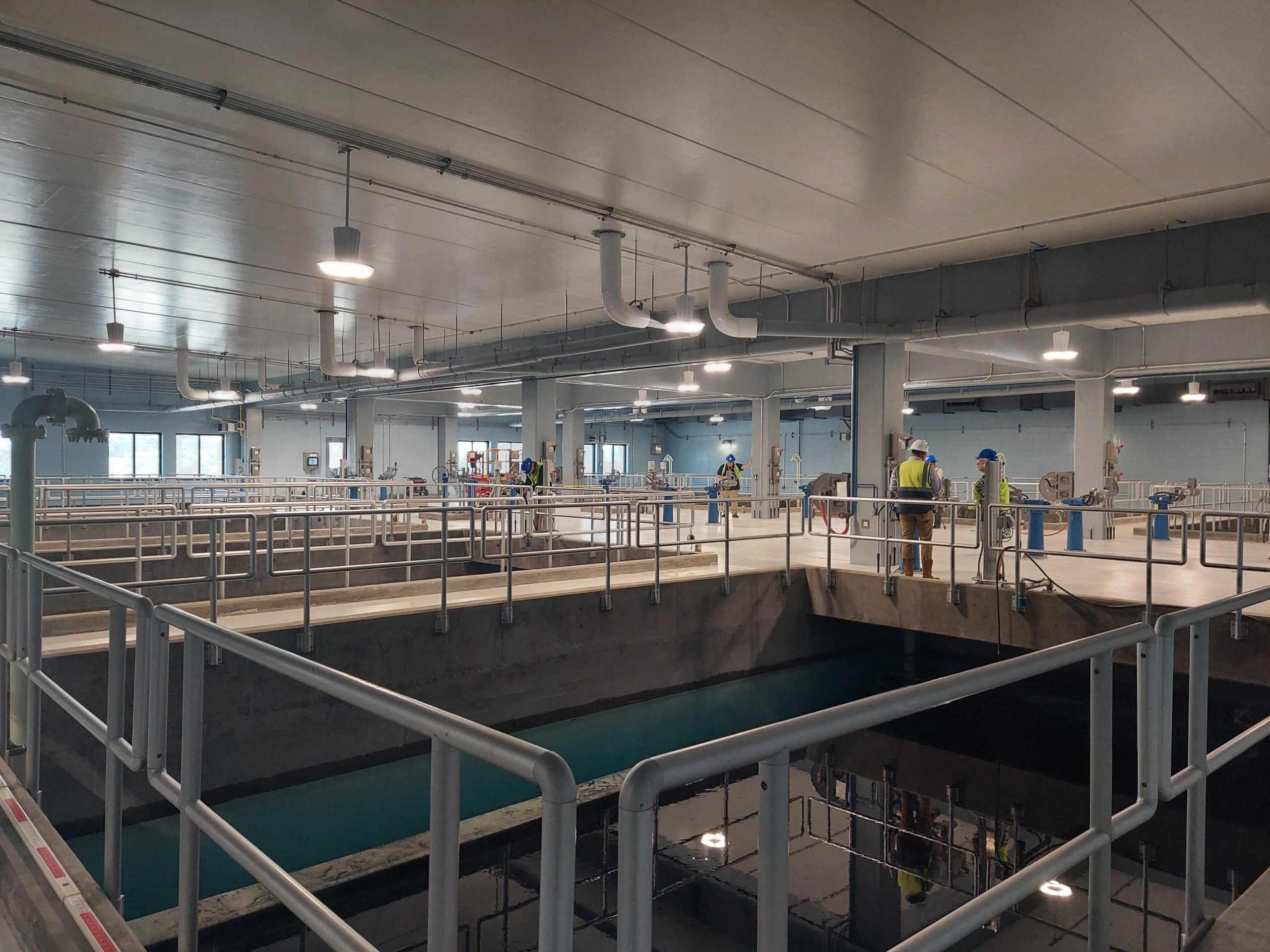 In November 2019, CFPUA began installation of carbon activated filters — the best method to remove PFAS from the Sweeney Plant, according to a 2018 pilot study. (PCD/ Carl Blankenship).

WILMINGTON — A treatment plant that sources the majority of the Cape Fear region’s drinking water is 100% free of per- and polyfluoroalkyl substances, or PFAS, as of Tuesday.

CFPUA gathered media and local officials at Sweeney to unveil its latest results Tuesday morning, as the deep-bed GAC filters are now online, with a combined water treatment capacity of 44 million gallons per day.

Ken Waldroup, CFPUA executive director, said the upgrade benefits all of its 200,000 customers. Each of the eight filters can treat 5.5 million gallons per day. The new filters at Sweeney contain almost 3 million pounds of GAC; CFPUA believes it to be the largest GAC public water treatment facility in North Carolina.

CFPUA board chair Jennifer Adams took the opportunity to toast the room, full of city employees, politicians and reporters, with freshly treated water.

“I’m holding in my hand the most recent lab results for this water,” Adams said. “The results: No PFAS whatsoever detected.”

Testing from Oct. 4 detected no PFAS, including GenX. The utility company specifically evaluates 70 “targeted” or known PFAS in the drinking water. It reported at least 18 present in its Sept. 29 testing, resulting in a combined 100 parts per trillion (ppt), down from 126 ppt July 6.

By comparison, the Environmental Protection Agency released a health advisory in June for GenX — a form of PFAS — setting levels to 10 parts per trillion.

PFAS have been flowing in the Cape Fear River — the source of the area’s drinking water — for four decades. DuPont began making vinyl ethers at its Fayetteville facility and discharging PFAS byproduct into the river. In 2015, DuPont launched its predecessor Chemours, now the name of the Fayetteville Works facility. Two years later, the public learned it had been exposed to toxic chemicals poisoning the drinking water for 40 years.

City council member Charlie Rivenbark, who also is a CFPUA board member, recalled StarNews exposing the water contamination via a series of stories published in 2017.

“We didn’t know what the hell Gen-X was, or I didn’t, but that seems like that was 10 years ago,” Rivenbark said.

He added that Tuesday’s milestone came at “warp speed.”

In November 2019, CFPUA began installation of the carbon activated filters — the best method to remove PFAS from the Sweeney Plant, according to a 2018 pilot study.

There are currently no regulations or advisories on PFAS aside from GenX; however, the EPA has plans to release a proposed PFAS National Drinking Water Regulation this fall.

Agencies such as Cape Fear River Watch have said the EPA hasn’t done enough to protect residents by regulating PFAS or researching more about long-term side effects. The EPA has only set compliance levels for water advisories.

As of June, Chemours and DuPont have paid $510 million in environmental remediation in accordance with a 2019 consent order with the North Carolina Department of Environmental Quality. Since, Chemours has reduced air emissions by 99% and water pollution by 97%.

But the costs of the Sweeney Plant filtration improvements are currently falling on taxpayers. CFPUA recently approved an 8% rate hike, equivalent to roughly $5 more per month per customer.

The utility company filed suit against Chemours and DuPont in 2017 to hold the Fayetteville company responsible for covering PFAS-remediation costs. It is currently going through discovery with a trial date expected in 2024.

In a statement to Port City Daily, a spokesperson from CFPUA said resolution of the suit is likely several years away and predicting the exact monetary award is difficult. Yet, because CFPUA operates with no profit, its customers would be the beneficiaries of any financial win.

Two themes were apparent: The project is a major accomplishment and Chemours needs to pay for it.

Members of the N.C. General Assembly are trying to take action against the chemical giant. Introduced in June, House Bill 1095, “PFAS Pollution and Polluter Liability,” would force Chemours to pay installation and operation costs of water treatment technology. It also would tighten penalties on the PFAS polluters.

Davis noted he sponsored the bill, as did Brunswick representative Frank Iler. Though it stalled in the short session, Davis told PCD during its election coverage he is not giving up and will continue to pursue the legislation.

“I am committed to protecting my community from pollution, ensuring that we have clean drinking water, and making those responsible for the pollution pay for the damage that they have done,” he said.

“Stop the commercials; stop the P.R. stunts; pony up; admit your mistake; give this organization the money that they deserve,” Butler said at the Sweeney Plant Tuesday.

Butler personally mentioned how excited she was to remove the reverse osmosis filter from her kitchen sink, again calling out Chemours’ open house in Leland a few weeks ago as a “dog-and-pony show.”

The company recently announced expansion of its services to include boosting the domestic semiconductor industry, created with Teflon fluoropolymers — a perfluorinated compound, or PFA, which Chemours specializes in. The company said it will not increase emissions and will help the U.S. produce more microchips, integral to everyday uses, included in cars, cellphones, and computers, as well as military aircraft, defense systems, electric grids and healthcare equipment.

“Big beds with a lot of GAC in it, imagine a gazillion eraser tips that are all black, and then you just pour the water in one end and you let it filter through the other end,” Zapple said. “Few moving parts, but it does such a magical thing for us.”

Adams assured CFPUA will continue to monitor PFAS levels in raw (untreated) and finished (treated) water at Sweeney. The utility company will test twice a month and keep customers informed.

“We will sometimes increase the frequency if there’s an event like a known discharge upstream of our intake,” CFPUA spokesperson Cammie Bellamy told PCD.

The health effects due to ingestion of PFAS are still being studied but have been linked to developmental effects on fetuses, thyroid disease, increased cholesterol levels, kidney disease, liver damage, testicular cancer and more.

Want to read more from PCD? Subscribe now and then sign up for our newsletter, Wilmington Wire, and get the headlines delivered to your inbox every morning.