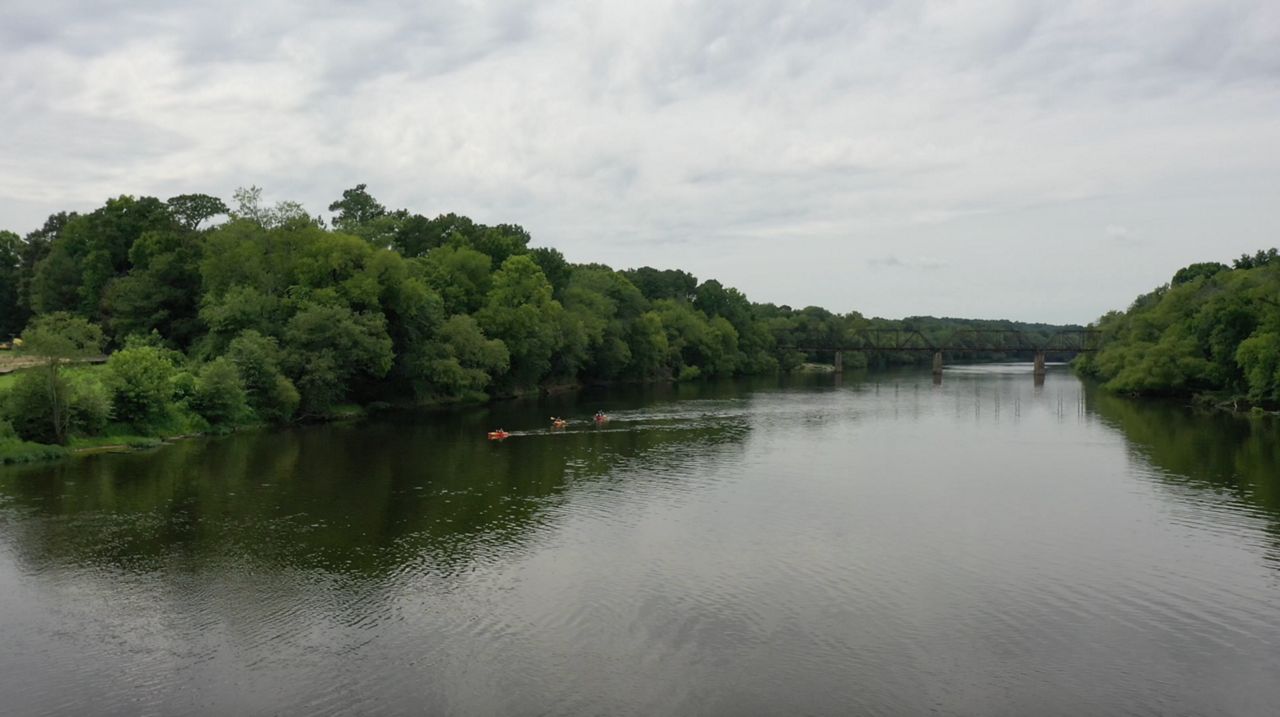 HARNETT COUNTY, N.C. — On Wednesday, Chemours filed a legal petition against the Environmental Protection Agency. The company is arguing that the EPA’s guidelines for a chemical, known as GenX, are too strict.

Meanwhile, one business owner along the Cape Fear River believes large companies need to be held to a high standard when it comes to protecting the environment.

Chemours filed a legal petition against the Environmental Protection Agency

The company is arguing that the EPA’s guidelines for a chemical, known as GenX, are too strict

“Sharing the joy of being outdoors and recreational paddling with average folks who might’ve never done that before,” Smirnov said.

He’s very passionate about how important this river is and not just because of his own interests.

“So our concern, No. 1, is pollution because the Cape Fear River being the major basin in North Carolina is supplying drinking water for 13 counties including Harnett County, which the drinking water facility is right next door over here providing drinking water for at least 125,000 customers,” Smirnov said. “A lot of people don’t value this resource as they should.”

“Sometimes it could be easily overlooked how special it is indeed but even if you don’t get out on the river every week or you might not have enjoyed the outdoors or recreation overall, but on the other side of it you are probably drinking that water,” Smirnov said. “You probably don’t realize some of the metals and other contamination that you might encounter in that drinking water.”

Over the years, Smirnov has noticed a lot of large companies doing business along the river, and there’s more to come, including Highland Paving Plant and VinFast.

“We have a newly built asphalt plant that potentially has some contents that drain into the basin. We also have a new car manufacturer that’s coming upstream in the Sanford area,” Smirnov said.

He supports the growth but is worried how these types of companies could hurt this precious resource.

“While some of those industries are vital for our modern civilization we also want to make sure they don’t cross into the polluting factor of our rivers,” Smirnov said.

He also believes that we all need to be held to a high standard when it comes to protecting the environment.

“Well as it’s proven to be the fact that unfortunately, people do not always do what is the right thing to do,” Smirnov said.

Smirnov says he has plans to partner with some local environmental groups in order to bring like-minded people together when it comes to advocating for this river.

Geoff Gisler, with the Southern Environmental Law Center, was involved in the 2018 lawsuit against Chemours polluting North Carolina waterways. His work focuses on water quality law, particularly on PFAS. While the SELC hasn’t decided to weigh in on the petition case yet, it is being considered.

The petition filed on July 14 is worrying but not surprising, he said, because it comes on the heels of the West Virginia v EPA ruling earlier this month.

“It’s not surprising, but it’s disappointing. I think where the West Virginia case was presented in some circles as limited because it focused on climate change, greenhouse gases and new uses of the Clean Air Act. What we see here is a very clear duty of the EPA to go in and evaluate toxic chemicals that are in people’s drinking water, very clearly given to the EPA as a responsibility by Congress, seeing something that basic attacked as beyond the scope of what they should be doing is a real threat to public act,” Gisler said.

He said Chemours’ petition goes further than the Supreme Court by attacking a basic directive of the EPA to keep water clean.

“That’s where the power of the Clean Water Act is. The goal of the act is not to keep toxic chemicals at a quote, unquote ‘safe level’ but to keep them out all together. That’s what the settlement was built around,” Gisler said. “I am comfortable that the EPA has the authority to continue to do what it is planning to do for PFAS, and I think ultimately this health advisory will be upheld. But we will see this argument over and over again.”

Gisler said average people are not powerless to keep their waterways clean. Showing support for the Clean Water Act and regulatory powers regarding water to lawmakers and environmental regulators goes a long way to make sure leaders know that the public wants clean water. There are laws at all levels of government to further protect clean water rights.

Currently, for example, the Department of Environmental Quality is considering the limits on Chemours for a new treatment system permit. Gisler said the current proposal would allow GenX discharges 12 times higher than the public health advisory recommends, but it is well within the department’s power to lower the allowed discharge to below the advisory limit.

More polluters may try to test the regulatory power of the EPA in the future, using an expansive reading of the West Virginia Supreme Court ruling. But Gisler believes the EPA has been given explicit powers to keep water clean for Congress, and he hopes that is enough to keep the water regulatory advisories in place.