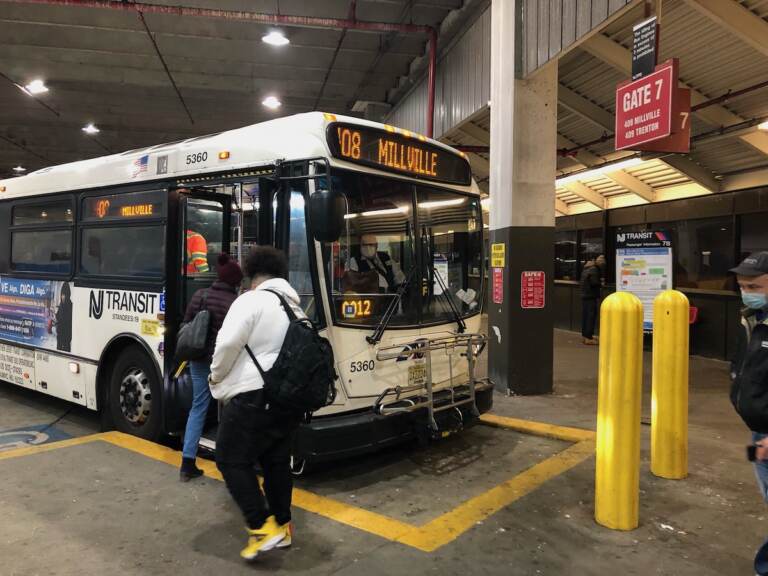 Passengers board NJ Transit Bus Route 408 to Millville at the Walter Rand Transportation Center in Camden on Dec. 10, 2021. The route operates between there and Philadelphia and Millville with a stop in Glassboro, the southern terminus of the proposed Glassboro Camden Line. (P. Kenneth Burns/WHYY) Image Source: WHYY.

“The Hub” is a weekly round-up of transportation related news in the Philadelphia area and beyond. Check back weekly to keep up-to-date on the issues Clean Air Council’s transportation staff finds important.

✨⛄Happy Holidays from the Clean Air Council to you and your family! ⛄✨

WHYY: Update On A Long-awaited South Jersey Project – The Glassboro-Camden Line was first proposed in 1996, 25-years ago. After multiple studies and roadblocks, the project is slowly becoming a reality and is expected to be completed as early as 2027.

WIRED: The US Is Discouraging States From Building New Highways – The Federal Highway Administration encourages state and local governments to fix existing roads and highways instead of building new ones. Such fixes include building bike lanes, walking paths, and other environmentally sustainable projects over the construction of new roads and bridges.

WHYY: Highest Number Of Fatal Crashes Involving Cyclists And Pedestrians In New Jersey – According to New Jersey’s state police data, the death of cyclists and pedestrians accounted for a third of the traffic deaths this year. The data shows record numbers since 1989 with over 20 cyclists and over 200 pedestrians being killed.

TransportationToday: $15 Million Federal Grant To Improve Benning Road In DC – The District’s DOT received federal funding of $15 million for improvements on Benning road. This funding will help to address safety concerns and also improve pedestrian and cyclist infrastructure within the corridor.