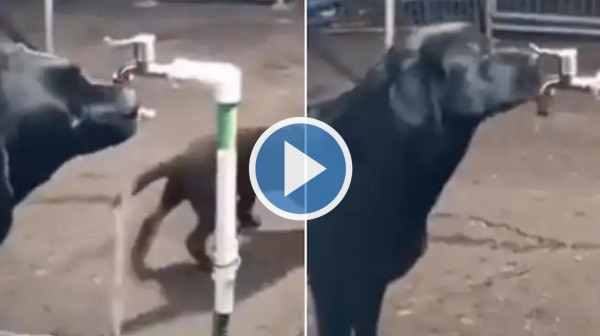 Viral Video: At a time when Earth’s resources are fast depleting, clean drinking water is certainly a privilege. However, despite its shortage, many people don’t think twice before wasting precious water. Setting an example for humans, a dog was seen drinking water from a tap. While that in itself is remarkable, the dog also closed the tap after drinking from it. The dog first opens the tap with its paw to drink water. After he quenches his thirst, he turns the tap off smartly.Also Read – IAS Tina Dabi And Husband’s ‘Beach Vacation’ In THIS Luxury Villa With Private Pool Goes Viral. See Pics

The video was shared on Twitter by IPS officer Dipanshu Kabra, with a caption that reads, “Every drop is precious… The Dog understands this, when will we humans understand?”

This video has impressed social media users to no end and netizens loved the smart dog’s thoughtful act. Many people have hailed the video as an example to be followed for saving water. One user said, “Dimag to har kese ke pass hota hai lekin har koi hoshiyar nahi hota.”

This dog’s act is a reminder to humans on the need to save resources and use them judiciously.