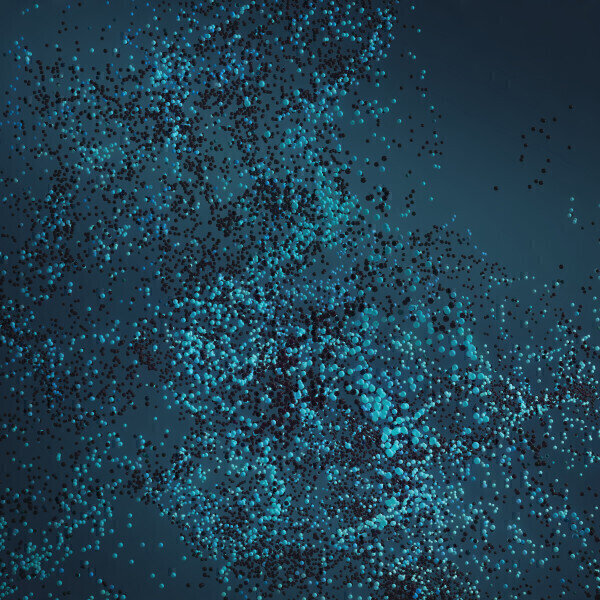 They’re with you on every trip you take, every surface you clean, every outfit you try out. Like the tagline for a bad horror film, you can’t run and you can’t hide from microplastics.
In particular, for those of us who work indoors, there’s no escaping plastic-based textile fibres. Every year, European households consume about 60 million tons of the stuff, accounting for about 16% of global plastic production.1 In fact, it has been estimated that around 60% of the clothes that we wear and 70% of our tea-towels, quilts, curtains and cushions are plastic-based.2
And production is increasing – by about 6% each year.

To be precise, microplastics are solid synthetic particulates or polymeric matrices of varying shape that measure somewhere between 1 mm and 1 μm, all of which are insoluble in water.3 Sometimes, microplastics are deliberately produced, as in the microbeads which are ubiquitous in cosmetic products. Otherwise, they are the result of larger plastics degrading – and that’s what has the experts most on-edge.
For instance, a study of settled dust in households found
that carpeted homes had more than double the amount of
fibrous polyethylene, polyamide, and polyacrylic in the air than places without carpeting. Yet, worryingly, while they might be spared these particular microplastics, the long-term degradation
of coating applied to most hard flooring ensures that these
homes have a greater concentration of polyvinyl fibres than their carpeted counterparts.4

When it comes to plastics, it’s what’s added to the compound –
to give it extra strength, a certain odour, decreased flammability, etc. – which is worrying. Most additives leach from the surfaces of microplastics once ingested because they are not bound to the plastic polymers. In particular, the additives of concern are the phthalates and bisphenol A (BPA), all of which disrupt the human endocrine system.
Take benzyl butyl phthalate, or BBP, a plasticiser used in everything from food containers and electrical wires to floorings and paints. Owing to their endocrinal effects, most phthalates are linked to insulin resistance and are classified as xenoestrogens.5 All of this also applies to bisphenol A (BPA), which has been hardening plastics since 1957.6

The troubling fact is that we are inhaling plastics treated with BBP and BPA at a higher rate when we’re indoors – current concentrations range from 1.6 to 12.6 microplastic particles per m3.7
By far and away, synthetic textile fibres – particularly polyamine, a.k.a. nylon, and polyester fibres -are the most abundant microplastics in indoor air. Many of the clothes that we all wear to the office will be made from synthetic materials, from which thousands of tiny fibres easily tear over the course of a day. But all sorts of everyday tasks, from the opening of plastic packaging to using a printer, spit out other microplastics, like degraded polypropylene and polyethersulfone, into the office air.8
Of course, there are simple safe-guarding measures that can be put in place immediately, like increased ventilation – in fact, many workplaces already take similar precautions for COVID-19.9 And other measures, like redistributing office space to allow for greater distance between workstations, may be more expensive, but as we all continue to split time between home and office, this might not even require any extra square-footage, just a bit of extra scheduling.
But, in the interests of health and safety, however, it’s important to characterise and quantify airborne microplastics – especially those which measure 2.5 μm in diameter or smaller, because at this size they can breach the lung barrier and enter the bloodstream.

As you descend below 500 μm, though, background interference by organic compounds will scupper analysis of untreated samples. There are a few chemicals capable of neutralising this interference, but the current vogue is to treat samples with sodium hydrochlorite or a 30% hydrogen peroxide.10 Usually, after treatment, a solution of zinc chloride, with a density between 1.6 – 1.7 g/cm3, is used to separate components, including microplastics of different types.11
In order to identify the particulates, it is customary to follow a two-step process. Firstly, using a stereomicroscope with an imaging analysis software, study the shape of the microplastics in the sample, which should provide a cursory understanding of their origin. If you observe thin fibres, the culprit is clothing and furniture; if you can see fragments, they’re the degradants of larger plastics like food containers, bin-liners and electrical appliances.
Secondly, an analysis of the polymeric composition of your microplastics, which will help to identify toxicological risks, is commonly conducted using Fourier-Transform infrared spectroscopy (FTIR). Using infrared light, this non-destructive spectroscopic method turns the absorption rates of the components into a spectrum, according to the Fourier Transform function, and digitally cross-references to identify the polymers. Although FTIR instruments are relatively expensive and require skilled technicians, the method produces reliable results with small samples.
Another popular choice is a combination of Raman spectroscopy and spectral imaging equipment, in which a uniform-wavelength laser is reflected, scattered, and absorbed by a sample, producing a unique fingerprint for each component. Although this method boasts the unique ability to detect microplastics all the way down to 1 μm, it suffers from a fair amount of interference (particularly, high background fluorescence) and the libraries of the instruments are currently under-developed.
Nevertheless, information about how to measure airborne microplastics is still very limited, but the dangers of overexposure are, as we have seen, far less limited. Further research is needed to establish standards in methodology and workplace exposure, to understand the exact behaviour and nature of airborne microplastics, to understand their toxicological profile – and it’s needed fast.
Now is not the time to take a breath.