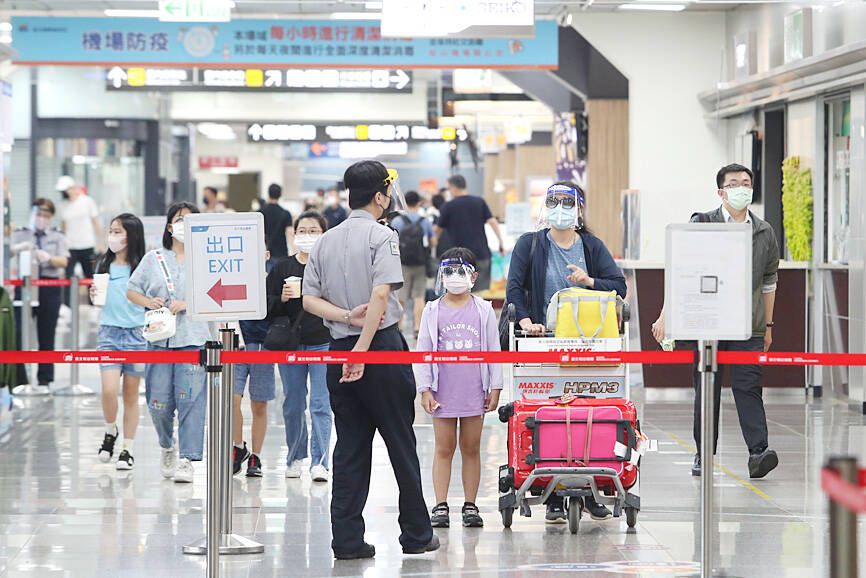 Inbound travelers from today are allowed to drive to a quarantine location in their own vehicle, the Central Epidemic Command Center (CECC) announced yesterday.

The inbound traveler cap last week was expanded to 50,000 per week because of increased travel demand, which prompted yesterday’s announcement, it said.

Civil Aeronautics Administration Deputy Director-General Fang Chih-wen (方志文) said that major airports would have designated parking areas for people to park private vehicles and signs at terminals would indicate the location of the parking areas.

People should check with their quarantine hotel whether it has parking spaces designated for inbound travelers entering quarantine before driving their own vehicle, he said, adding that vehicles may not be hired to transport people from an airport to a quarantine site.

Arriving travelers are recommended to disinfect the inside and outside of their vehicle, especially wiping the door handles, steering wheel, seats, seatbelts and luggage storage areas, when they arrive at the quarantine location, Fang said.

Also starting from today, inbound travelers can return home for the four-day self-disease prevention period, as long as they follow the “one person per room” principle, the CECC said, adding that if they stay in a hotel for this period, it must be a quarantine hotel.

Deputy Minister of Health and Welfare Victor Wang (王必勝), who heads the CECC, said that inbound travelers are still subject to the “3+4” quarantine policy — three days of quarantine followed by four days of self-disease prevention.

The inbound traveler cap might be increased further if the rate of those who spend the self-disease prevention period at home rises, which would free up quarantine hotel capacity, and if airport capacity and COVID-19 testing capacity are sufficient, Wang said.

With the fast-spreading Omicron BA.5 subvariant of SARS-CoV-2 becoming more prevalent, school semesters starting and the Mid-Autumn Festival long weekend approaching, the risk of local community spread of COVID-19 is expected to increase, so demand for at-home rapid test kits is also expected to rise, it said.

From today, people can buy a maximum of two packs — with five-kit packs costing NT$500 each — in each round, Wang said, adding that the two packs can be purchased at once or separately.

People can also purchase packs for others by showing their National Health Insurance (NHI) card or residence permit, he said.

There are 4,539 NHI-contracted pharmacies across the nation and 79 public health centers in remote areas that sell the packs, he said.

The third round of free rapid test kits for children born on Sept. 2, 2015, or after started on Aug. 15, so those who have not picked up a free pack can still receive them at the pharmacies and public health centers, he added.

People born in 1957 or earlier are also be eligible for an additional free pack from today, he said.