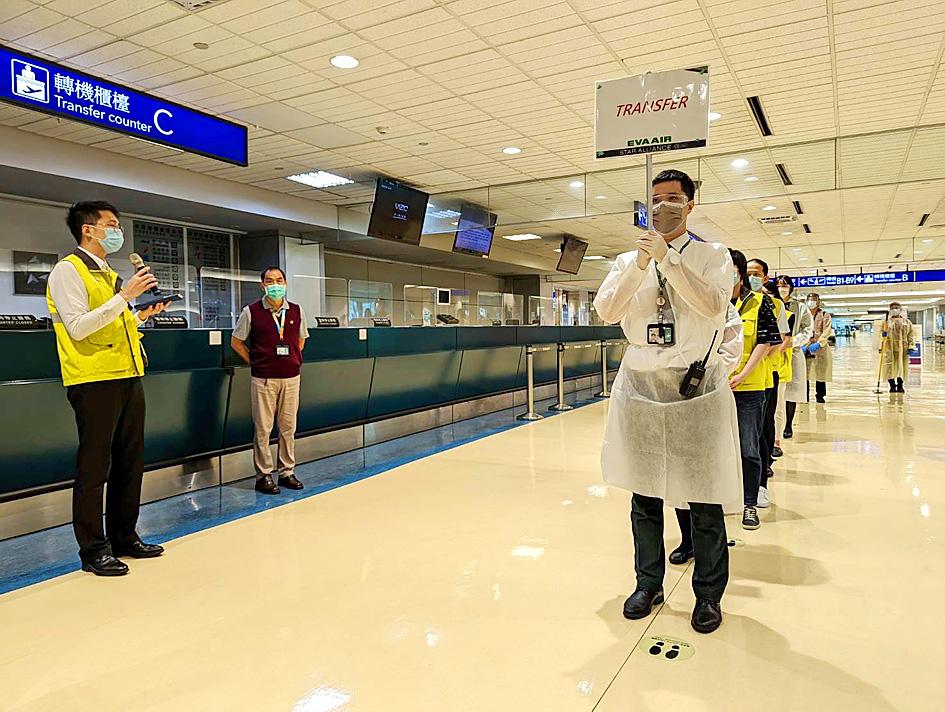 The airport operator resumed the service after the Central Epidemic Command Center (CECC) on Saturday further eased border control measures that were imposed to contain the spread of the COVID-19 pandemic.

The center has also lifted the ban on inbound passengers being picked up by friends and relatives at the airport.

On Monday afternoon, the company conducted a drill to ensure that all stakeholders at the airport are familiar with the new procedures, from guiding transit passengers to the security checkpoint and dining areas to ensuring that relatives pick up international arrivals in the designated areas.

“Allowing international arrivals to be picked up by their friends and relatives will greatly shorten the time they wait at the airport,” he said.

Upon disembarking, transit passengers would be guided by airline crew to a security checkpoint, and then wait for reboarding at designated boarding gates or VIP rooms, TIAC said.

Duty-free purchases or meals ordered would be delivered to them, the company said.

Arrivals remaining in Taipei could get a ride from family or friends, or take a quarantine taxi, the company said.

Friends and relatives must wait for arrivals in the international arrival terminal’s waiting area, it said, adding that they cannot park in the pickup zone outside.

Offenders would be fined by the Aviation Police Bureau, it added.

The airport suspended services to transit passengers on May 19 last year after the COVID-19 alert was raised to level 3.

Arrivals must present a negative polymerase chain reaction test result within two days of flying to Taiwan and there is an initial cap of 25,000 arrivals per week.

In other news, the Travel Bureau has proposed that the requirement that people in domestic tour groups have a booster shot of a COVID-19 vaccine be waived, Minister of Transportation and Communications Wang Kwo-tsai (王國材) said.

“Some travel agencies told us that most of those on local tours are elderly people, many of whom have yet to get a booster shot. The requirement has prompted them to cancel half of the tours,” Wang said. “We have written to the CECC with the hope that they can drop the booster shot requirement for domestic tour groups, just as they did for gym members.”