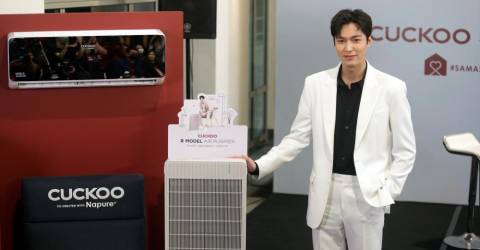 In a keynote address during Cuckoo’s Appreci8th Anniversary Concert at the Axiata Arena yesterday, Cuckoo’s founder and chief executive officer Hoe Kian Choon said the company was set to open its largest distribution centre by Q1 next year in Subang Jaya to strengthen its distribution network and capabilities.

Besides that, Hoe said, Cuckoo is on track to open its new office in Shah Alam to cater for the company’s growing pool of talent as well as its first ever Brand Gallery in Kuching, Sarawak, which will offer customers and fans an all-new brand experience by end of this year.

During the event, which was attended by over 9,000 concert goers, Cuckoo also unveiled a new generation entry-level air purifier which, according to Hoe, is perfect for every Malaysian household as it is priced at RM69 per month. The product is available for purchase starting today.

“Cuckoo Family, customers and fans, because of you, we are able to grow from just a healthy appliance brand to be one of Malaysia’s leading Healthy Home Creators serving over 1.5 million Malaysians and over five million Malaysian household users; because of you, we have achieved a 97 per cent customer satisfaction rate in a recent independent survey.

“Our commitment remains constant. We will continue to strive beyond standards to bring unparalleled Healthy Home solutions, shaping healthier homes and inspiring Malaysians to #samasama live healthier and happier,“ he said.

Hoe added that Cuckoo had been diversifying its portfolio for the last two years to provide Malaysians with holistic healthy home solutions by featuring different brands and focusing on different aspects of what makes a home healthier.

He also said this year had been a year of innovation for Cuckoo as it had launched a series of innovation across its Healthy Home pillars, including water purifiers, air purifiers, mattress, air conditioner, skincare products and more.

Cuckoo put on an extravagant show to appreciate its loyal staff and customers in a four-hour concert which saw an incredible line-up of local artists and vocal powerhouses performing, including Aina Abdul, Hael Husaini, Dolla, Khai Bahar and Misha Omar.