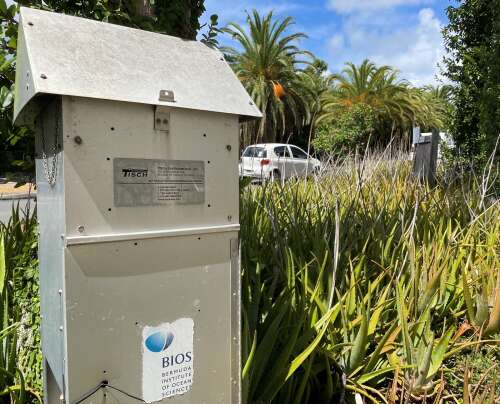 Empty: The housing for an air monitoring station run by the Bermuda Institute of Ocean Sciences on Crow Lane Park by East Broadway leading into Hamilton is now vacant of equipment (File photograph by Jonathan Bell)

An air-monitoring programme that was defunded by the Government could be reinstated if allowance is made by the finance ministry for the cost to be covered, the Minister of Home Affairs said yesterday.

Walter Roban highlighted that checks required by law continued to be made and confirmed that amendments to the Clean Air Act will be subject to public consultation.

The Royal Gazette reported in August that a 9 per cent cut to the home affairs ministry budget resulted in the shutdown of an air-monitoring programme that cost $230,000.

Stations at East Broadway, Prospect Devonshire, near the Tynes Bay Waste to Energy Facility, and St George’s – a control site – were affected.

Mr Roban, who is also the Deputy Premier, said today air monitoring required under law by power firm Belco “and other facilities” continued.

He explained: “There was never a total elimination of air monitoring. There were a couple of key places that were supported by funding that was given to BIOS [the Bermuda Institute of Ocean Sciences] that were not happening, that’s all.

“But all of the major air monitoring that is required under law, still happens.”

Mr Roban added: “Our goal is to reinstate that funding in the next budget cycle if the finance ministry allows and we can provide that support funding to, particularly BIOS, who was the actual agency that had been contracted to do the ones that were eliminated, which is basically down at the Foot of the Lane and in another area.

“So never, ever did the elimination of those stations impact the monitoring of Belco.”

Mr Roban said: “We intend to reinstate that funding so we can work with BIOS in the future to continue the monitoring that they were doing on our behalf.”

The minister said that the Clean Air Act developed in the early 1990s “used concentration limits based on international data available, at that time” in relation to known health effects on people.

He added: “The island’s outside air quality continues to be monitored to these standards.

“In the 30 years since drafting these regulations, understanding the health effects of air contaminants from combustion-engine sources has been refined.

“Additionally, other than as a nuisance under the Public Health Act 1949, offensive odours under current legislation are not adequately covered.

Walter Roban, the Deputy Premier and Minister of Home Affairs, at a post-Throne Speech press conference (Photograph by Blaire Simmons)

Mr Roban said: “Amendments to the Clean Air Act will update and introduce new measures to address air quality standards that align with the UK and EU, based on the latest health and safety data on the exposure of air contaminants to humans.

“They will also introduce measures to minimise as much as practicable the impact that nuisance odours have on the general public, especially those in residential areas.”

He added: “Ironically, with the studies that we’ve done, most of the issues around clean air, in particular, the contaminants that are the most pervasive, are not from the Belco stack or the Tynes Bay, but actually it’s from our cars.

“The quicker we move towards the electrification of transport, we eliminate a considerable amount of contaminants in our air and in our environment.”

The Bermuda Clean Air Coalition said earlier that the Government repeatedly failed to consult its members over draft legislation to update the Clean Air Act.

Mr Roban insisted today that consultation will take place. He said: “We can’t provide anything if it’s not quite at that stage yet.

“There is a particular type of process that we go through to prepare legislation.

“Once we have legislation to actually provide we will consult and we have committed to a public consultation, not just with the Clean Air Coalition, it will be available to every member of the public to look at prior to any consideration by the Legislature.”

• To read the minister’s remarks in full, click on the PDF under “Related Media”.