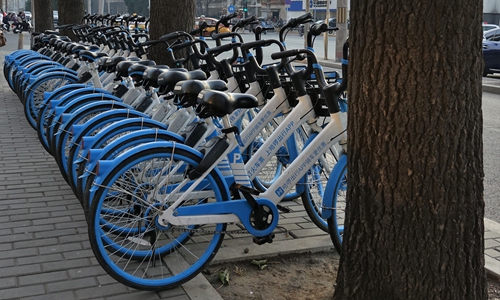 On the first working day after the May Day holidays, demand for shared bikes skyrocketed in some core business areas of Beijing, as the capital tightened anti-virus measures and closed some of the city’s subway stations and bus stops to cut the spread of the virus.

Shared bike operator Hellobike told the Global Times on Thursday that in Chaoyang district, the rate for shared bike usage during the Thursday rush hour rocketed 69.2 percent from the previous day due to the city’s latest anti-virus measures.

Meituan Bike, the shared bike arm of food delivery platform Meituan, put more bikes on the streets within a range of 5 kilometers from the temporarily closed subway stations. Staffers who handle operations had to arrive for work one hour earlier than usual, said the company in a statement sent to the Global Times.

With the surge in bike use, many piled up outside some subway stations, jamming the roads. In response, Hellobike deployed 60 more workers and 30 transport vans to the subway stations in Beijing’s Central Business District (CBD).

“I was planning to rent a shared bike at the station near my home to go to work in the morning, but there were few left and many were broken,” a white-collar worker surnamed Shen in Chaoyang district who works in the CBD told the Global Times on Thursday.

“I didn’t expect the situation, since normally there should have been plenty of shared bikes,” Shen said, adding that she had to walk for hundreds of meters to find one.

The Beijing municipal government announced on Wednesday that residents in some key areas of Beijing’s most populous Chaoyang district would have to start working at home from Thursday, and those who must work in their offices should avoid public transport and reduce gatherings at companies.

However, despite the surging demand, data from Hellobike showed that the overall usage rate in Chaoyang district on Thursday morning was 27.9 percent, nearly 10 points less than before the May Day holidays when it was 37.5 percent, showing that the anti-virus measures did reduce the flow of people.

In keeping with local anti-epidemic efforts, operators of shared bikes also deployed workers to disinfect the bikes and parking spaces.

On Thursday, Beijing reported a total of 39 locally transmitted COVID-19 cases and designated four areas in the city as high-risk areas.