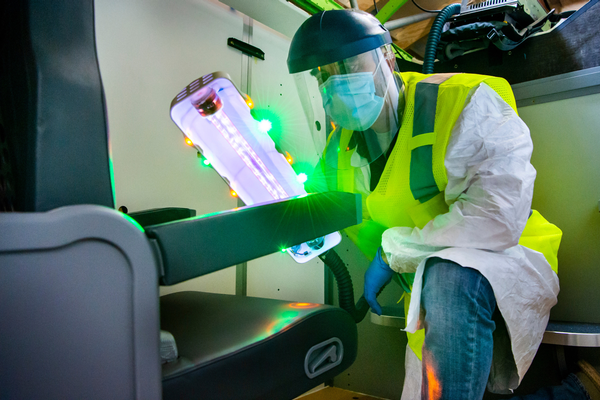 When COVID-19 hit two years ago, airlines made it a point to significantly upgrade their respective cleaning measures on planes.

Now, a TikTok video from a passenger showing a filthy mess on a plane as flyers boarded the flight has prompted a social media backlash and questions about whether airlines are still following the rigid guidelines it imposed in the wake of the pandemic.

The video was from a recent Ryanair flight from the Canary Islands to London. Let’s just say it wasn’t one of those fun safety videos that airlines like to show just before takeoff. This one included several disturbing images of snacks and crumbs on the floor of the cabin that had not been vacuumed or cleaned before the next flight.

The story was first reported by the New York Times, which showed images of the mess.

Clouds of dust, spilled drinks and potato chips on the floor: Has airplane cleanliness gone the way of masks? Recent social media videos suggest that it has. https://t.co/wgQGQe2zG7

The story quickly caught the eyes of social media users, who were only too happy to answer the question the Times posed about who was to blame for such a mess.

Plane’s a Filthy Mess. Who’s to Blame? https://t.co/qjlM1JA970 2 culprits:
1. Growing # of passengers, slobs who have no respect for comfort of others&obviously know not what a garbage bag is for.
2. Suits of airline co. whose greed surmounts needs of passenger paying more4less.

And it isn’t just foreign airlines suddenly under fire. This tweet from a passenger called out Delta Air Lines:

@Delta You really need to look at the cleaning and cleanliness of your aircraft, on my second flight on a Delta Connection, the plane was filthy. There were so many crumbs between the seats and grease/dirt on the air vents which made me feel sick! pic.twitter.com/pRJFcOMiJg

And this one from a flyer using Avelo Airlines:

Hello @AveloAir the low fares to fly your airline are great and the staff is friendly, however the planes are filthy. The plane going from New Haven to DC was bad, but the plane returning home was worse. This is just one picture. pic.twitter.com/3VMrWID9uW

But many people did forgive the airlines, which have been under pressure all spring and summer for numerous delays and cancellations – in part caused by staff shortages.

“They have 25 minutes on the ground they can barely complete safety checks,” one person wrote in a well-liked TilTok comment according to the newspaper. “Don’t blame them blame the people who left it.”

Others pointed out that there is a big difference between the COVID disinfectant protocols and just general tidying up before the turnaround. Some airlines have dropped the pandemic-related disinfecting procedures introduced two years ago, while others have adopted new measures. American Airlines, for instance, told the Times it brings in a cleaning between every flight. JetBlue amended its cleaning policy to only disinfect planes that come into the U.S. from overseas. Most airlines do ask crew members to generally tidy up between trips.