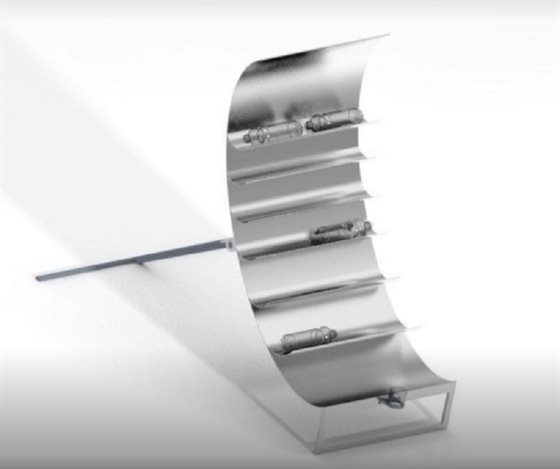 A team of engineering students from De Montfort University Leicester (DMU) are hoping their sustainable water purifier will help them take the crown at a national design competition.

Each year, Engineers Without Borders UK and Ireland hosts its Engineering for People Design Challenge, a competition for university students to design a solution to a real-world problem.

This year, students were tasked with researching the needs of the Aboriginal and Torres Strait communities in Cape York, Australia.

The team will pitch its reflector to an expert panel of judges at the competition’s grand final, which takes place on Friday 17 June.

For Tom, the product’s simplicity may give Light₂0 the edge.

“I certainly think we’re in with a chance,” he said. “We have to hammer home the comparatively simple design and low maintenance costs.

“The aboriginal communities have a big connection with the environment, so they have an agreement with the government that any products that are brought into their communities have a minimal impact on their lands. That’s why we wanted to go with a low technology, low wastage solution.”

Purifying water by leaving it directly in the sun is known as solar water disinfection (SODIS) and it usually takes around six hours to disinfect up to two litres of bottled water when left in direct sunlight.

The team’s design however speeds up that process significantly and water obtained from natural sources, including rivers, can be disinfected in approximately two hours.

The curved surface contains six shelves that are capable of holding two, two-litre clear bottles of water. The reflector is concave to bounce as many UV rays as possible onto the water, warming it significantly to aid the speed of the SODIS process.

To ensure SODIS can work, the water first must be relatively clear of dirt – a difficulty when obtaining water from natural sources. The team has countered this by including a holder at the base of the reflector so users can create a natural water filter using rocks, pebbles sand and a cloth.

Joseph said: “One of our initial designs was to include a shop-bought filter but if it got dirty or didn’t work as well, it would take time to replace. So, we opted for including a guide to creating a natural filter with resources that are widely available in Cape York and included the bracket at the base of the reflector to allow people to build their own.

“To use the filter, simply cut a bottle in half and first put a cloth or rag in there, then pack it with sand and pebbles. Before you fill the bottles on the reflector, you pass that water through the filter until it’s a clear enough state to ensure SODIS works.”

Light₂0 are one of 36 teams competing at the Engineering for People Design Challenge grand final and will travel down to University College London’s state-of-the-art Person-Environment-Activity Research Laboratory (PEARL) to pitch their idea.

Ellie, Yelena, Tom and Joseph will be the only representatives from DMU on the day. The team were one of five groups put forward to the competition by academics at the university and the only one to advance to the grand final after a screening process with the organisers.

The grand final is divided into two pitches; an initial eight-minute virtual pitch and Q&A session, which took place earlier in the year, followed by a three-minute in-person pitch that takes place on the day of the final.

The judges will then combine the scores from both the three-minute and earlier eight-minute pitches to produce a final six.

These six teams will then pitch their ideas again to both the judges and the remaining 30 teams before a winner is crowned, with that team taking home £9,000 between them.

Ellie added: “We’ve honed in how the product works particularly for Cape York. At the moment, the Australian government send out trucks with bottles of water, which isn’t the most sustainable and practical solution. When the monsoon comes, these communities can be particularly isolated so this method can bypass that supply chain issue.”

There is also a separate People’s Prize, where members of the public can read through each team’s submission and view their associated documents and files and vote for their favourite design. The winner of the People’s Prize will be announced during the grand final.

Yelena said: “We are so tremendously happy with how far we have come. It was unexpected for us to be shortlisted for the top 36 teams.

“We are proud of our project and delighted with the amount of support we are receiving from fellow students and academics. With this, we would like to ask you to help us represent De Montfort University in this national competition by voting for us in the People’s Prize.”

Voting for the People’s Prize is available here and is open until 2pm on Friday 17 June.