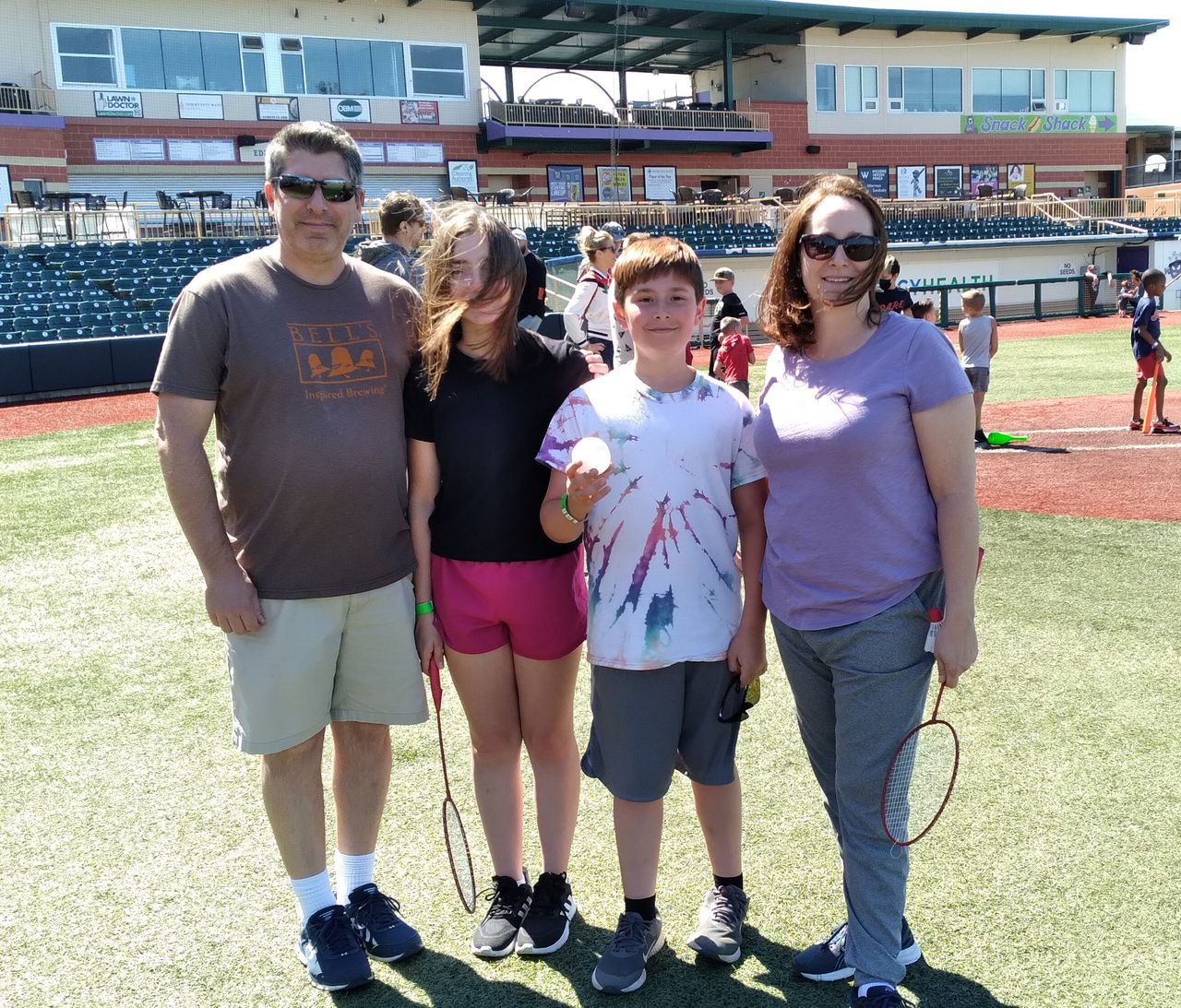 AVON, Ohio – The annual Avon Heritage Duck Tape 2022 Festival was back and pleasing a crowd primarily of families. The admission was free and the first 500 attendees at the Crushers stadium received a free roll of Duck Tape. Speaking to quite a few who attended made it clear this year’s festival, though a bit smaller, was still a fun community event and they were happy to come out for it on a windy but sunny day.

The weekend of June 16-18 offered up good food, a beer tent, axe throwing, a parade and the opportunity for kids to pose with their favorite Superheroes plus, of course, artistic creations made of Duck Tape all through the outside areas of the Avon stadium where the festival was held this year.

The kids also had a chance to try out a bit of Tee-ball, hitting the ball off an adjustable tee sitting on home plate in the minor league stadium and then being able to run around all the bases in what is now called Mercy Health Stadium. The kids showed their pleasure with big smiles as well as their efforts to get in line again for another chance to hit the ball and run the bases one more time.

There was also an assortment of “bouncy houses” on the upper deck of the stadium—clearly a popular collection as dozens of children kept moving in and out of the huge, custom inflatables.

But it wasn’t just the kids who were excited the Duck Tape Festival was back as the event got back in the swing post-COVID.

The vendors were happy too and there were plenty of them. One in particular was Craft Me Pretty. The Parma owner of her two-year old business, Charla Custer, makes shirts, tumblers, mugs and other items from recycled items.

She noted how happy she was to be at the Duck Tape Festival because she had heard good things about it, that it is being held in a family-friendly area and the coordinator of the festival is very responsive to the vendors with a good flow of attendees. “Everyone has been warm and friendly,” Custer said.

Another vendor, Cheryl Pitts, of Greater Regional Technology in Elyria, was showing Hyla ylaair purification systems that use water rather than filters. The system is also licensed as a medical unit, she said, and purports to clean, disinfect and deodorize the air in the home.

Pitts offered her opinion of this year’s Duck Tape Festival saying they are happy with the concrete parking area for the vendors “and they have pony rides and bouncy houses,” she said. “Yes, no carnival rides or a Ferris wheel for the teens this year and that’s sad but you know what? The carnival rides company went out of business due to COVID. And they still got wonderful bands (for the festival) and we are coming back from COVID. I love it here.”

Anthony Jeter and Lucinda Gutierrez from Lorain were at the Duck Tape 2022 Festival with their four children, ages almost-1, 3, 6 and 10. Anthony is off to the side with their youngest. They come out frequently, Anthony said, for the Crushers’ games.

A family waiting in line for a family photo with Superheroes also indicated the fun they were having. Anthony Jeter and Lucinda Gutierrez from Lorain were there with their four children, ages almost-1, 3, 6 and 10. They come out frequently, Anthony said, for the Crushers’ games.

When asked how the family was enjoying this year’s festival, Anthony said, “It is great. Most places we have been to for activities are so crowded. This one is pretty spread out and there are no long lines. Yes, things are limited but we make the best of what we have here.”

Joel and Amy Bodway with their daughter, Amy, and son Kyle having a great time at the Tee-ball game at the Crushers’ stadium at the Duck Tape 2022 Festival.

At the Tee-ball game down on the field, Joel and Amy Bodway came from Michigan on a vacation to the museums of Cleveland and for some canoeing, then on to Cedar Point after their visit to the Duck Tape Festival, finishing up their trip by exploring Kelly’s Island. Their kids, Haley and Kyle, are older and, in addition to running the bases, they were having fun playing cornhole, large scale Jenga and badminton as well as looking at the Duck Tape sculptures. Haley also mentioned the supplies and instructions being given out to take home that will allow them to make either a wallet or a rose out of Duck Tape.

Amy added, for next year, she would like to see a return of the Duck Tape prom clothing competition again. Joel said, “I think this is great. The kids are having a ball. It’s just great now to see a lot of people.”

The vote is in and the nay-sayers appear to be out-numbered. Everyone talked to was upbeat, optimistic and happy to be at the Duck Tape 2022 Festival.