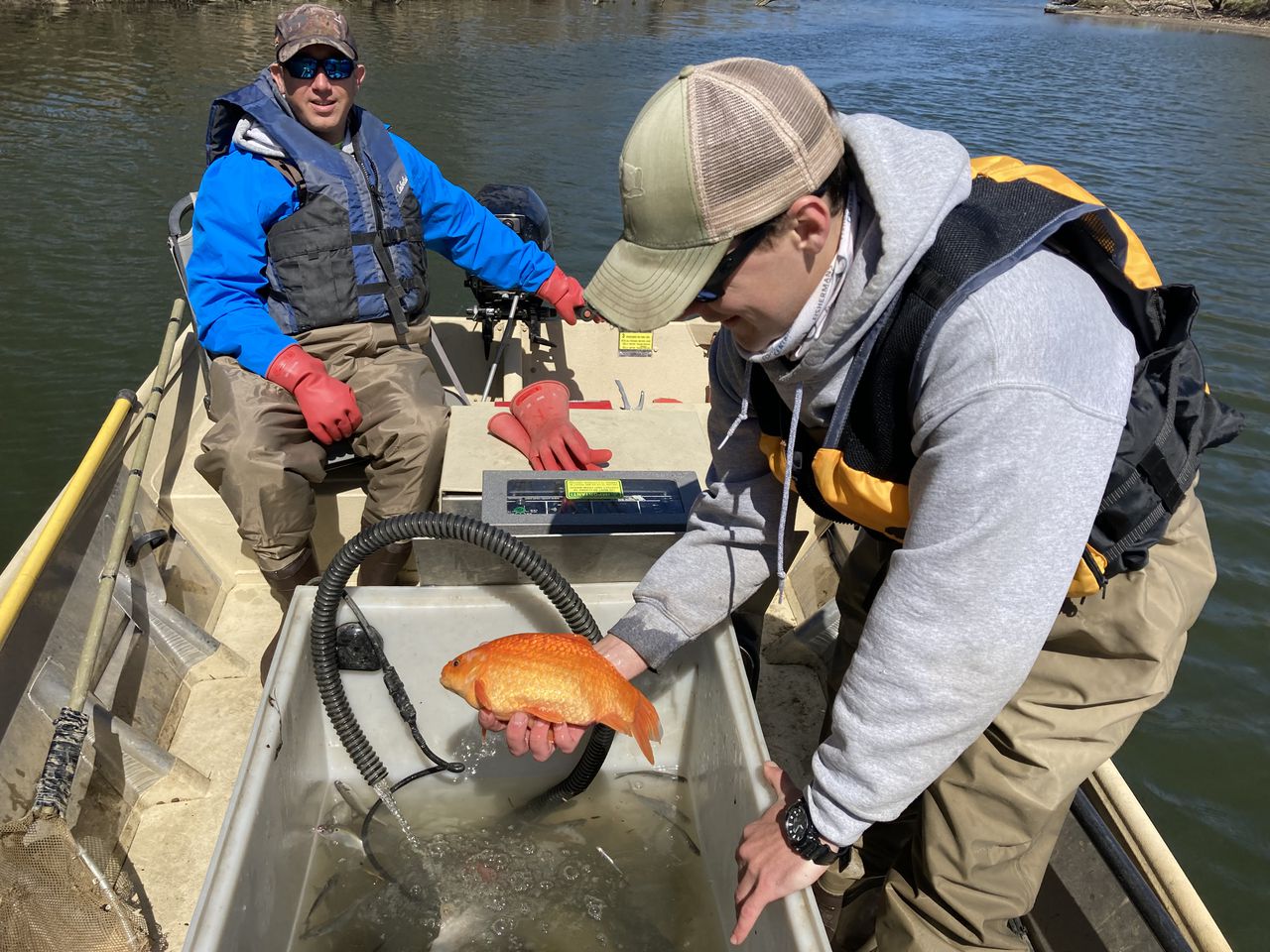 CLEVELAND, Ohio – On a slow-moving Euclid Creek just before it empties into Lake Erie, field biologists Mark Matteson and Justin Telep were demonstrating one of the ways the Northeast Ohio Regional Sewer District monitors the streams and rivers it is charged with protecting.

Not with poles and hooks and the appropriate bait, but with a special flat bottom boat that shoots an electric current into the water that stuns nearby fish so they can be easily scooped from the stream.

As Matteson piloted the boat from his seat in the stern, Telep brandished a long pole with a net at the tip. At the appropriate time, Telep stepped on a pedal that sent electrons from an onboard generator through two sets of spider-like anodes that dangled off the bow.

The boat served as the cathode, which completes the circuit and dictates the flow of the current. But that required all occupants to wear rubber waders and rubber gloves so they wouldn’t get shocked if they touched metal.

If Matteson and Telep were doing their jobs for real – rather than simply demonstrating their technique for the media – they would have brought the fish to shore so they could be separated by species, counted and weighed.

The sewer district is required to conduct such fish surveys in several of the waterways in its coverage area to satisfy its discharge permit from the Ohio Environmental Protection Agency.

Inspecting the biodiversity of a stream – including fish as well as aquatic bugs and crustaceans – allows the sewer district to determine if it is meeting expectations of the Ohio EPA, said Seth Hothem, supervisor of environmental assessment at the sewer district.

And analyzing the aquatic life in a stream can actually be more effective in determining health than simply testing the chemistry of the water from time to time, Telep said, because if something isn’t detected in one of those snapshots, it will be reflected in the fish and bugs that live there all the time.

This year, the sewer district’s electrofishing will commence in mid-June. The Cuyahoga River, the Chagrin River and its tributaries, Euclid Creek, and three streams – Nine Mile Creek, Shaw Brook and Dugway Brook – that empty into Lake Erie in Bratenahl are on the list to be surveyed.

Most of the electrofishing will be conducted using wading apparatus, but when it comes to the fishing the Cuyahoga, Matteson and Telep will use the boat.

The fish Matteson and Telep caught during their demonstration ranged from a large carp to minnows. Telep even netted a couple steelhead trout – one had already spawned while the other apparently had not – that he estimated were more than 2 feet long.

The steelhead would have come in from the lake and are not native to the creek, nor Lake Erie for that matter, having been introduced there in the 1880s.

Other species taken from the creek included a northern pike, which is native, and a pregnant goldfish – the size of a small dinner plate – that is not.

At one point, Telep held up a couple of freshwater drum, also known as sheepshead, for a photo opportunity. One looked healthy, the other had a fungus just below its mouth.

“It kind of looked like a tumor,” Telep said later, although he couldn’t say what caused it. “Sometimes it can be natural, other times it can be caused by something in the water.”

One good sign was the presence of emerald shiners, tiny fish that are often the bait of choice for perch fishermen. Their population has fluctuated over the years and is currently on the upswing, Matteson said. “So that’s a good indicator.”

Other fish that are good indicators of water quality include the redhorse sucker, smallmouth bass, darters and mimic shiners, Hothem said

Redhorse are good because they feed on insects and need clean stream bottoms to spawn, he said, while smallmouth bass are carnivores. So if they are around, so too are the smaller fish they feed on.

As for darters, “They’re also insectivores and they’re present in riffles,” Hothem said, which means they need clean stream bottoms and well-oxygenated areas.

The sewer district also conducts surveys of aquatic bugs found in streams, often by placing pieces of composite board in the water that attract colonies of insects over time. Some bugs are less tolerant of pollution so if they are found in the water that bodes well for stream quality.

If a lot of mayflies, for example, are collected that is a good thing because they are generally not found in dirty water or areas of a stream with low dissolved oxygen, Hothem said.

The Cuyahoga is one of the waterways that is routinely surveyed, both upstream and downstream from the Southerly Wastewater Treatment Plant – one of three such plants operated by the sewer district. But excessive rain meant only one round of testing could be performed last year instead of the usual two.

The bugs scored well at both locations, but while the fish numbers were good downstream, they were only fair upstream where there was a lack of pollution-intolerant species, such as mimic shiners and the stonecat madtom, a type of small catfish, that would have signaled better health, Hothem said.

And yet, the river’s carnivore score was as high as possible as a result of 23 smallmouth bass having been caught in a section of the Cuyahoga in one hour, Hothem said.

For a period of time the Cuyahoga was getting healthier, Hothem said, and in 2006 the sewer district caught its first mimic shiners in the river, but in recent years improvements have leveled off overall.

“It has sort of been status quo for a while,” Hothem said, although in 2010, the sewer district found the roseyface shiner upstream from the Southerly plant, which was positive, and in 2019 it found black redhorse and river chub, also a pollution intolerant species, both upstream and downstream.

Hampering the Cuyahoga is the 6-mile long navigation channel that is devoid of habitat for fish to live.

In better shape is Rocky River, which was last surveyed in 2020 and was found to be meeting all the goals of the EPA for fish and bugs, Hothem said. The waterway has a lot of diversity and lower numbers of tolerant fish such as carp, bullheads and green sunfish, and greater numbers of intolerant species such as the stonecat madtom and mimic and roseface shiners.

The river has benefited from the rerouting of some wastewater discharge that had been emptying into tributaries of Rocky River and are now going to the Southerly plant, Hothem said. A large carp is pulled from Euclid Creek after being stunned by an electric current delivered through the spider-like anodes that extend from the bow of the boat.Peter Krouse, cleveland.com

Any business or organization that discharges into a stream is required to have an EPA permit, but a lot of times bad things, such as E. coli, get into the water anyway. Much of it comes from the combined sewer overflows, which is when overtaxed pipes release raw sewage into the environment, but that problem is gradually improving with the ongoing construction of new storage tunnels and other improvements to the sewer district’s system.

Runoff can also harm streams, taking things like road salt and dog feces into the water. And in the middle of the summer, a quick downpour that collects heat from solid surfaces such as an asphalt parking lot can send warmer than normal water into a stream, making it less hospitable for its inhabitants.

One of the problems with Euclid Creek is a manmade dropoff near 185th Street that was created when Interstate 90 was realigned. That makes it harder for fish to make their way upstream, Hothem said, hence the number of species found there during the most recent survey were low.

“There weren’t a lot of sunfish up there,” he said, nor suckers or darters, but there were some minnows and a few largemouth bass. Only one steelhead was found, but that’s not surprising giving the obstruction along the way.

The U.S. Army Corps of Engineers is designing a fish ladder to help steelhead and other fish make it further upstream, he said.

But that’s only part of the problem. Even where combined sewer overflows have been remedied, there are leaks in the system or illicit discharges that bypass the system altogether, although when they are found they are fixed.

Such efforts help restore life to Cleveland’s compromised urban streams, but returning them to their natural state is another question altogether.

“They are never going to be as natural as they were before humans came,” Hothem said.