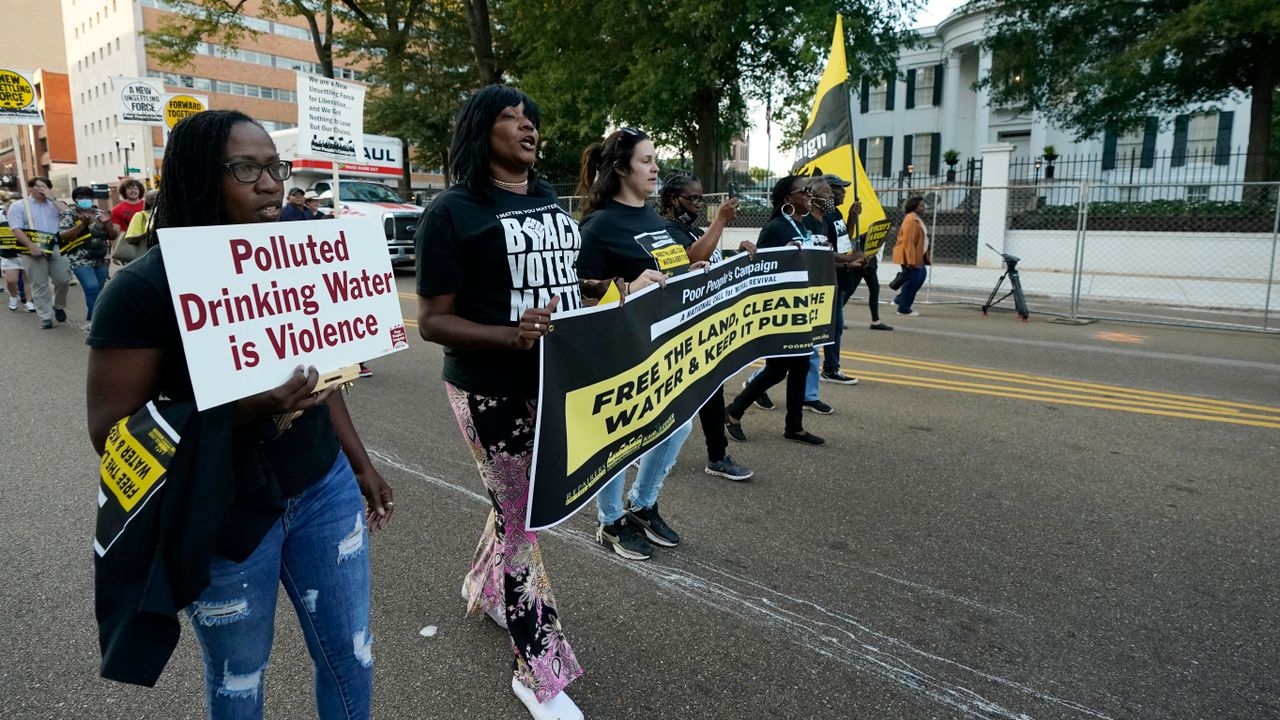 This week, the federal Environmental Protection Agency (EPA) concluded part of its investigation into the water crisis afflicting the more than 150,000 residents of Jackson, Mississippi, announcing that water from the city’s two water treatment plants have been cleared for safe consumption.

Jackson residents and supporters hold signs as they march with members of the Poor People’s Campaign of Mississippi to the Governor’s Mansion in Jackson, Miss., to protest the ongoing water issues, poverty and other social ills, on Oct. 10, 2022. [AP Photo/Rogelio V. Solis]

The announcement comes just over two months after Jackson’s residents were plunged into a major social crisis after the cresting of the Pearl River flooded the city’s water treatment plants and damaged much of the decades-neglected, aged and brittle piping. As the city’s water-and-sewer infrastructure was being mended, the city continued its boil-water advisory from the month prior, followed by Republican Governor Tate Reeves declaring a state of emergency on August 30, which he recently extended to run through to November 22.

Jackson’s Democratic Mayor, Chokwe Antar Lumumba, said Monday that the EPA determined the city is now in compliance with the Safe Water Drinking Act, which regulates public drinking water standards. He said the update was “welcome news.” Lumumba’s words are hollow and remain uncritical of the fact that the EPA will not be reporting its findings on copper and lead levels in the water util mid-November.

The EPA’s determination follows the premature lifting of the boil-water advisory on September 15 accompanying the city’s resumption of water service, despite reports of coffee-brown and cloudy water coming from the taps.

Boil-water notices have been a general staple of life for Jackson’s residents in recent years. Years of decay, mismanagement and corporate looting has left the city’s plants and pipes vulnerable to leaks, breaks and contamination. “[I]t’s not a matter of if these systems will fail, but when these systems will fail,” Lumumba fatalistically noted in September.

The abysmal state of the water and sewer system in Mississippi’s capital city is a prime examples of malign neglect by the state, local and federal governments towards the health and safety of the working class and the most vulnerable in society—the most notable example being their response to the COVID-19 pandemic.

Lumumba told reporters Monday that the city is actively working to secure a private firm to control operations and maintenance at the O.B. Curtis Water Plant, the plant hit hardest by the flooding. “In the meantime, we are working closely with the Department of Justice and the EPA to ensure our treatment facility continues to function,” Lumumba said.

On Twitter, using the hashtag #JxnWaterCrisis, residents are reporting dirty water coming from their faucets—as recently as October 28—while still dealing with “sky-high water bills,” one tweeted. Another tweeted the water “Looks like acid,” and that they “Can’t believe this is allowed to happen in this day and age.” Another tweeted, “Everyone needs to stop paying,” followed by another writing, “Why is anyone paying the water bill[?] You’re paying for poison they owe you a refund.”

As the city remains under a state of emergency, Reeves explained the extension will permit management of the O.B. Curtis plant a five-day transition period from the state to the private operator chosen by the city, with his office saying more than $13 million has been put toward plant restoration, maintenance, and water distribution. The Democratic and Republican response to the crisis is the same, offloading the burden to a third party, absolving either party of any responsibility for future breakdowns in the system.

On October 14, the Mississippi Emergency Management Agency (MEMA) issued requests for a third-party company to assume management of Jackson’s two water treatment plants, well water facilities, and elevated storage tanks, seeking firms for a one-year management contract. Days later, the Jackson city government issued its own request, with Lumumba telling the press his administration did not have a say in the state’s request for quote. Responses to the proposals are due November 7.

This move towards the privatization of the public water system sparked a furor among the residents in the city, particularly among the poor and working class. It also provoked a rally outside the governor’s mansion demanding access to clean drinking water, with people chanting the slogan, “Free the land; clear the water and keep it public!”

In response to Reeves’ statements, the EPA said, “The people of Jackson, Mississippi, deserve access to clean and safe water, and EPA is committed to working with state and local authorities to make that a reality—in the near and long-terms.”

On October 20, the EPA responded to complaints filed by the NAACP (National Association for the Advancement of Colored People) alleging racially-motivated civil rights violations. The EPA announced it would investigate whether the Mississippi State Department of Health (MSDH) and the Mississippi Department of Environmental Quality (MDEQ) “discriminated against the majority Black population of the City of Jackson on the basis of race in the funding of water infrastructure and treatment programs and activities.”

Meanwhile, the EPA has declared the water safe for consumption before getting the test results determining the level of lead contamination which was detected following the flood, and issuing no demands for an overhaul of the decades-old, deteriorating infrastructure.

“At that point, the State of Emergency must, by statute, end as the water system can be managed solely by local control, as has been insisted upon by the City of Jackson,” the governor’s office stated. “The State of Emergency must only exist when a situation is beyond local control and the City of Jackson has demanded local control.” However, it remains unclear whether the city will secure a firm to handle operations come November 22. “That’s the plan,” said Jackson Director of Communications Melissa Payne. “It remains to be seen whether we will or we won’t.”