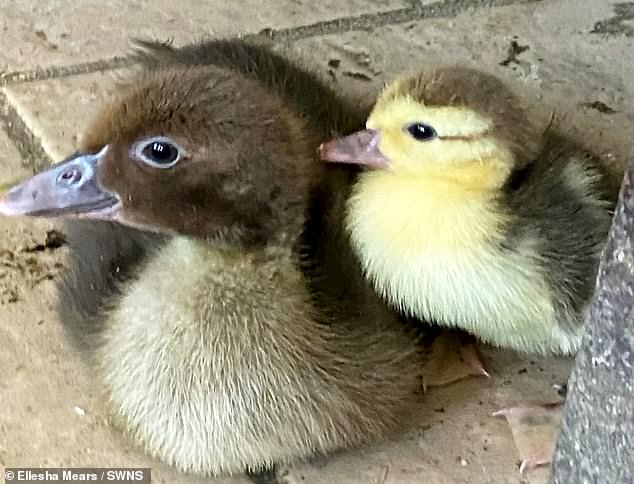 The family of the UK’s bird flu ‘patient zero’ have launched a £10,000 fundraiser to disinfect his home after his beloved ducklings were culled by officials.

Heartbroken Alan Gosling 79, is believed to have caught the potentially deadly H5N1 strain from the Mandarin ducks he adopted at his waterside home in Buckfastleigh, Devon.

He began to see some of his beloved flock falling ill in late December – which resulted in all 160 — 20 of which he kept inside – being culled soon after by a team in hazmat suits.

The retired train driver now sits at home alone – unable to even leave his front door as the property is considered contaminated.

His worried family are claiming they fear they will have to cover the cost of cleaning the inside of the house and have now set up a fundraiser in a desperate bid to raise money.

Heartbroken Alan Gosling 79, (pictured) is believed to have caught the potentially deadly H5N1 strain from the Mandarin ducks he adopted at his waterside home in Buckfastleigh, Devon

It is understood that a professional decontamination of the indoor areas has already been arranged, which is being led by the local authority. However, it remains unclear who is footing the bill.

Daughter-in-law Ellesha Gosling, 26, has set up a fundraiser in the hopes of covering the potential costs of disinfecting the property.

She said: ‘I want to set up a GoFundMe page to help fund the clean up for dad.

‘We’ve had some ups and downs, some very low lows. It has been very overwhelming.

‘Dad can get more ducks, but he wont have the same rapport with them as he did with the others. They were his family.’

Ellesha added that the family has not yet looked too far into the future – and are taking it just one day at a time.

‘[We will] be there for dad, keep in constant contact, and try and push to find a contractor to do the disinfection so we can go and see him,’ she said, ‘We need to keep pushing for answers.

‘We want to know when they’re going in and cleaning and disinfecting so we can see our father, and we want to know dad won’t have to pay but at the minute we don’t know that’s the case.’

The family say it is unclear who will pay for the cleaning process. Teignbridge District Council have been approached for a comment.

A UK Health Security Agency spokesperson said: ‘The district council will carry out decontamination of the property when the risk of onward transmission has been minimised. 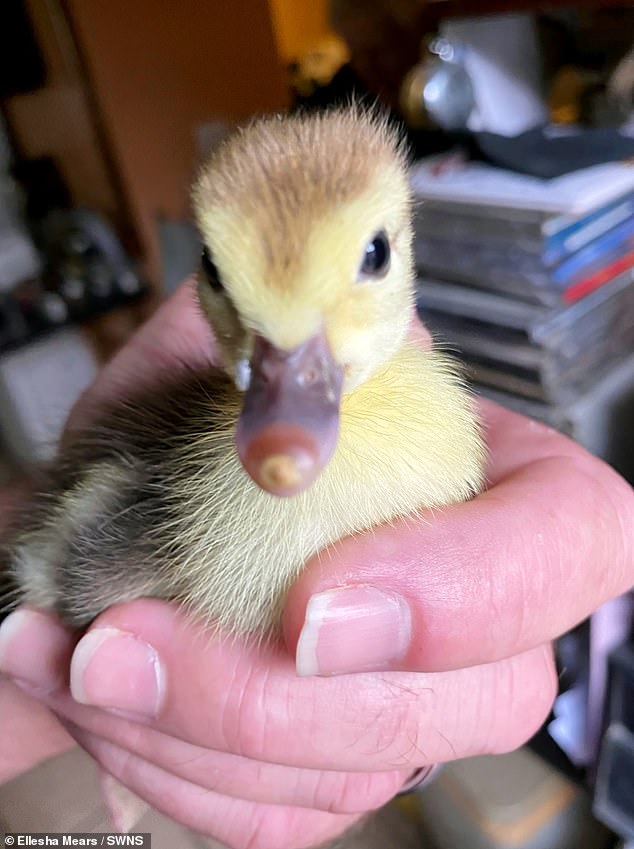 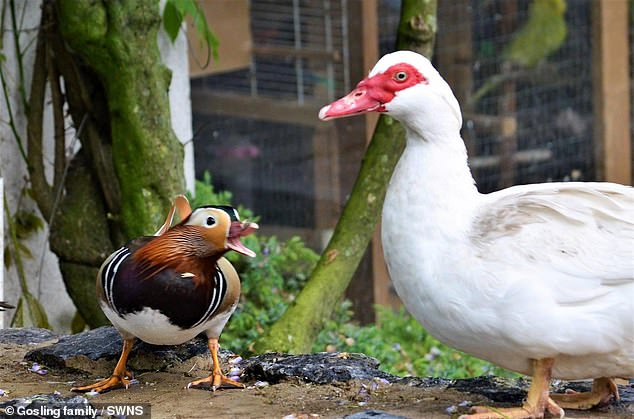 ‘The person is being checked regularly to ensure their welfare is protected.’

An Animal and Plant Health Agency spokesperson said: ‘Our sympathies remain with the owner and all those with animals affected by this terrible disease.’

Neighbours, who described Mr Gosling as ‘eccentric’ said they were not surprised the part-time clock repairer had caught the disease, given his close proximity to the animals.

‘A friend of mine went into his house a while back to get a clock fixed,’ said one local, ‘and he described the place as being overrun with ducks – and their droppings everywhere.

‘I guess it was only a matter of time before he caught something from them.’

Another neighbour said that Mr Gosling had tended the ducks for all the 10 years or so they had lived close by.

‘He’s devoted to the animals and I think it went from him feeding them in his garden by the river, to allowing them to cross the bridge to his property and then allowing them into his house. 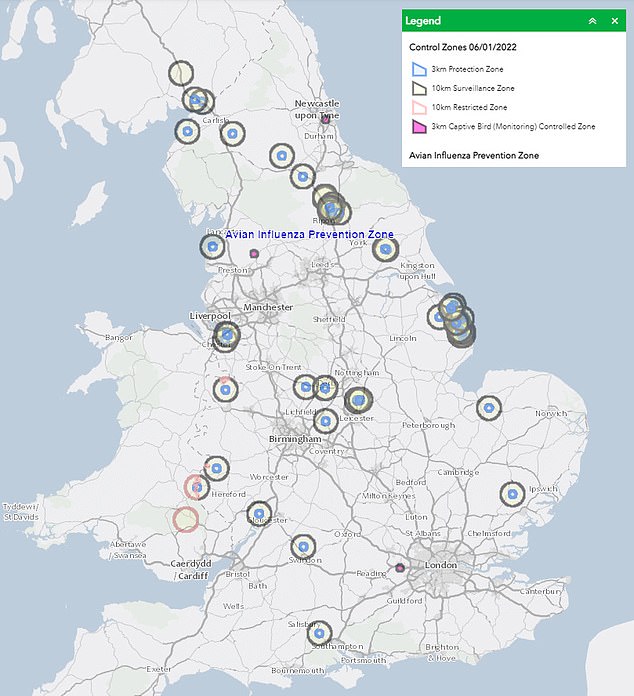 A virus that kills up to 50% of humans… but transmission is rare: Everything you need to know about bird flu

What is bird flu?

Bird flu, or avian flu, is an infectious type of influenza that spreads among bird species but can, on rare occasions, jump to human beings.

Like human influenza there are many strains of bird flu:

The current outbreak in birds in the UK is H5N1, the strain that the infected Briton has.

Where has it been spotted in the UK?

A case of bird flu has been spotted in a human in the South West of England.

Officials did not disclose the exact location of the case, but UKHSA said all close personal contacts of the individual have been traced and there is ‘no evidence’ of the infection having spread to anyone else.

The UK is facing a particularly bad year for cases in birds, with around one million having to be culled in Lincolnshire — where the virus was first spotted on December 11.

Exclusion sites were put around Mablethorpe, Alford and South Elkington in the region.

There have also been outbreaks North Yorkshire and Pocklington in East Yorkshire.

How deadly is the virus?

Fatality rates for bird flu in humans have been estimated to be as high as 50 per cent.

But because transmission to humans is so rare, fewer than 500 bird flu deaths have been reported to the World Health Organization since 1997.

Paul Wigley, professor of avian infection and immunity at the University of Liverpool, said: ‘The advice given by APHA and UKHSA over contact with infected birds is sensible and should be followed.

‘The risk of wider infection in the general public remains low.’

Is it transmissible from birds to humans?

Cases of bird-to-human transmission are rare and usually do not spread on human-to-human.

Bird flu is spread by close contact with an infected bird or the body of one.

Professor Ian Jones, a virologist at the University of Reading, said: ‘Transfer of avian flu to people is rare as it requires direct contact between an infected, usually dead, bird and the individual concerned.

‘It is a risk for the handlers who are charged with the disposal of carcasses after an outbreak but the virus does not spread generally and poses little threat.

‘It does not behave like the seasonal flu we are used to.

‘Despite the current heightened concern around viruses there is no risk to chicken meat or eggs and no need for public alarm.’

What are the symptoms?

Symptoms of bird flue usually take three to five days to appear with the most common being:

Mr Gosling is believed to have started co-living with ducks after his divorce from ex wife June Axford, who also lives in Buckfastleigh,

She told MailOnline: ‘He never kept any ducks or birds when we were together.’ She said the couple divorced more than 20 years ago, but she added that despite being in the same small town, they never saw each other.

The pensioner is the first ever human case of H5N1 — which is fatal for up to half of the people it infects — recorded in the UK and Europe. Despite his age, Mr Gosling said he feels ‘fine’ and has not showed any symptoms.

Despite killing millions of poultry worldwide, animal to human transmission of H5N1 is extremely rare with fewer than 1,000 people diagnosed with the strain globally since it emerged in the late 1990s.

Onward spread to people is deemed to be even rarer. But H5N1 has for years been highlighted as a potential pandemic threat due to how contagious it is in animals. It is feared that as the virus spreads, it may acquire mutations which make it easier to infect humans.

Professor Paul Hunter, an infectious disease expert at the University of East Anglia, told MailOnline that bird flu could be the next human pandemic.

Amid fears there could be a resurgence in influenza cases in the UK this winter, Professor Hunter said being infected with bird flu and regular flu at the same time could also trigger dangerous mutations.

He said: ‘That’s thought to be how some flu pandemic started in the past, most recently in 1968 and 1957. That’s why people worry more about containing bird flu and ensuring it does not spread.

‘But it’s an extremely rare event that is possible but unlikely. Not a lot of people have flu at the moment, so there is a vanishingly small risk of a person with the flu catching bird flu, but it has happened in the past and could trigger a pandemic if it happened now.’

But the development comes with fears about infectious pathogens at an all-time high in the UK after two years of the Covid pandemic, reignited by the latest surge in Omicron infections.

Mr Gosling, a father of three, grew close to the ducks over several years of feeding them. They had settled near his home – but he eventually invited 20 to live inside with him.

Shortly before Christmas, he noticed the ducks were becoming ill and they subsequently tested positive for the H5N1 strain of bird flu.

As a precaution, health officials swabbed Mr Gosling and detected low levels of the H5 flu found in birds. It remains unconfirmed whether he has the N1 strain.

Nevertheless, the result makes Mr Gosling the first human in the UK – or Europe – to become infected with H5.

Mr Gosling did not need hospital treatment, and officials said there was no evidence he has spread it to anyone else.

His close personal contacts, including anyone who visited his home, have been traced and there is ‘no evidence’ of the infection having spread to anyone else, the UK Health Security Agency said.

The current H5N1 outbreak is the largest bird flu crisis ever recorded in Britain, with 2million poultry culled as part of efforts to control the virus.

Britain’s outbreak is part of the spiralling crisis currently ravaging Europe and has been going on for weeks, which sparked fears of a turkey shortage in the run-up to Christmas.

Bird to human transmission of bird flu — also known as avian flu — is rare and has only occurred a small number of times in the UK. However, the public is being urged not to touch sick or dead birds.

Subsequent human-to-human transmission of avian influenza is even rarer, meaning the risk of a major outbreak in people is deemed to be even lower.

The case was first detected after the UK’s Animal and Plant Health Agency, identified an outbreak of the H5N1 strain of avian flu in the person’s flock of birds.

As a precaution, UKHSA swabbed the person involved and detected low levels of flu. Further lab analysis showed the virus was the ‘H5’ type found in birds but have UKHSA said it has not been possible to confirm that this is the same H5N1 infection currently circulating in birds Britain.

You can donate to the fundraiser here.