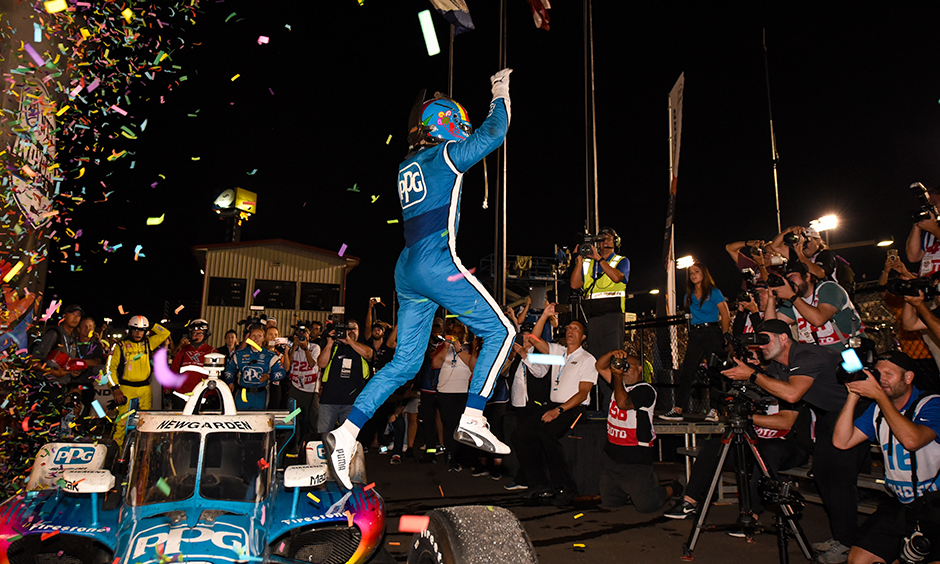 Fifteen races down, two to go for the NTT INDYCAR SERIES championship, and the pursuit is historic.

Teammates are separated by just three points atop the standings with two drivers from a rival team lurking a few points back. In all, seven drivers are legitimately in the hunt to claim the Astor Challenge Cup as the series takes a short breather before its two-race trip to the West Coast to end the season.

So much to settle, so much to consider. Let’s start with a Fifth Gear look at how Saturday night’s rain-interrupted marathon at World Wide Technology Raceway set the table for the stretch run.

It had been more than a decade since an INDYCAR SERIES driver won three consecutive years at a given track – Sebastien Bourdais won three in a row in Long Beach from 2005-07 – but that’s what Josef Newgarden accomplished in the Bommarito Automotive Group 500 presented by Axalta and Valvoline. But the driver of the No. 2 PPG Team Penske Chevrolet had to wait for it.

Newgarden sat second behind race leader and Team Penske teammate Scott McLaughlin during the two-hour weather delay that came at Lap 214 of 260. Newgarden was seething during that time period, too, because he knew he would have been the race leader had he not been slowed coming to pit lane by a lapped car in front of him. Newgarden could not wait to get back in his car, and his eagerness showed.

A few minutes past 9 p.m. local time, the command came to start engines came, and the green flag waved. Newgarden wasted no time establishing himself as the driver to beat, drifting to the high lane in Turn 2 to get clean air for a spirited run down the backstretch. As McLaughlin led him to Turn 3, Newgarden directed his car to the low side and convincingly passed for the lead, a position he held the final 36 laps without threat.

“That (pass) wasn’t really planned, I’m just going,” Newgarden said of his mindset. “I don’t know where I’m going, I’m just going. (McLaughlin) is going to go as hard as he (could) to the corner; I’m going to go harder. It may work out, it may not. That’s sometimes my mentality. It seemed to work (in this case).”

The win was Newgarden’s series-leading fifth of the season and ensured him of having the first tiebreaker – most wins during the season — when the final standings are tabulated next month. Newgarden also drew within three points of teammate Will Power (No. 12 Verizon Team Penske Chevrolet) for the series lead as Power, the NTT P1 Award winner, finished sixth.

As series rookie David Malukas mentioned after the race, there were two winners Saturday night, and he was the other in delivering his best result of his young career.

The 20-year-old driver of the No. 18 HMD Honda of Dale Coyne Racing with HMD stormed to the lead group in the closing laps, overhauling McLaughlin’s No. 3 Odyssey Battery Team Penske Chevrolet with just under two laps to go. Malukas was on Newgarden’s tail at the checkered flag, which suggests that had the race been a lap or two longer he might have scored his first series victory and the first race win for a rookie driver since Alexander Rossi won the 2016 Indianapolis 500 presented by Gainbridge.

Before Saturday night, Malukas’ best finish had been eighth (in Race 2 last month at Iowa Speedway), but this result didn’t come from nowhere. In fact, the Chicago native has been gaining confidence throughout the season, especially since the “500” where he was the highest-finishing rookie in 16th. He had started in the top eight of five of the eight races since Indy and has finished on the lead lap in all the oval races except Race 1 at Iowa, when he was one lap down in 14th amid Newgarden’s domination.

The result of the performances has Malukas only 11 points behind Christian Lundgaard (No. 30 Mi-Jack Honda of Rahal Letterman Lanigan Racing) for the Rookie of the Year Award. Lundgaard finished 19th at WWTR.

Credit series officials for being ready for a driver still not 21 years old to reach the podium and earn the right to celebrate. Malukas was given grape juice instead of the traditional champagne.

“They have the confetti, it’s a lot,” Malukas said of his first impressions of the post-race celebration. “Wow, a lot going on. (But) I got grape juice.”

Malukas said Newgarden let him spray “the real stuff” from his bottle, which seemed right.

“Actually, it makes more sense because I’m spraying it away from me, not toward me,” he said of the champagne. “I thought, ‘Why didn’t they give me the real stuff? Maybe they gave them the grape juice, but that’s not fun. I don’t know. Maybe I can just tell them I’ll close my mouth.’”

Grape juice will again be needed if Malukas finishes on the podium in either of the season’s final two races as his 21st birthday is Sept. 27.

Malukas added he was a bit unsure what to do once the race finished as he hadn’t earned a spot on the podium since finished second in both Indy Lights presented by Cooper Tires races last October at the Mid-Ohio Sports Car Course.

“Mainly, (I was) just nervous because I haven’t done it in a while, so I had no idea what to do,” he said. “Driving past the start/finish line even, that was great, I was celebrating. (But) where do I go, what do I do?

“Thankfully, McLaughlin, I just watched him, (was) staring him down. I thought, ‘OK, I’m just going to copy him.’ Yeah, I did it. I think it went smoothly.”

Team Penske is pleased with how Saturday night’s race ended, although it would have preferred McLaughlin hadn’t lost second place to Malukas in the late going. Still, the team’s three championship challengers finished first, third and sixth, important points-paying positions.

Atop the standings are Power and Newgarden, who are separated by three points. Dixon and Ericsson are 14 and 17 points out of the series lead with the other three starting to fade from the top tier. Palou is fifth in the standings, 43 points back, with McLaughlin sixth (minus-54) followed by O’Ward (minus-58).

The results in Portland will provide immense championship clarity. Assuming all series regulars participate in the final two events, those eligible for the title at Laguna Seca will need to be within 49 points of the lead. And remember, the first tiebreaker is the number of race wins, which gives Newgarden (a career-high five) a big advantage. Dixon, McLaughlin and O’Ward have two wins each.

Said Newgarden: “As much as I want (to become a three-time champion), believe me I do and I will work to be that person, we also have to just make sure we remember that it’s about all of us and it’s about all the effort we put in. We have to make sure one car secures the championship.”

Until the red flag for rain, Saturday night’s race had only one caution, that coming on Lap 145 when Jack Harvey scrubbed the Turn 4 wall with the No. 45 Hy-Vee Honda of Rahal Letterman Lanigan Racing. Given the lack of stoppages, the action on the short oval was intense, and statistics bear that out.

There were 520 passes in the race, the most since INDYCAR started keeping that statistic at WWTR when it returned to the track in 2017. Of those, 179 passes were for position, the most recorded at WWTR.

Newgarden credited the rubbered-up high lane for improving the show.

“I think we made some progress this weekend, I really do,” he said. “The (30-minute) extra session (Friday night) was positive; they worked that lane in a bit more. We used it; I used it. I never thought I’d get up there, (but) it definitely was useable.”

Newgarden added that racing at WWTR “would be awesome, like gnarly” if a second groove became the norm.