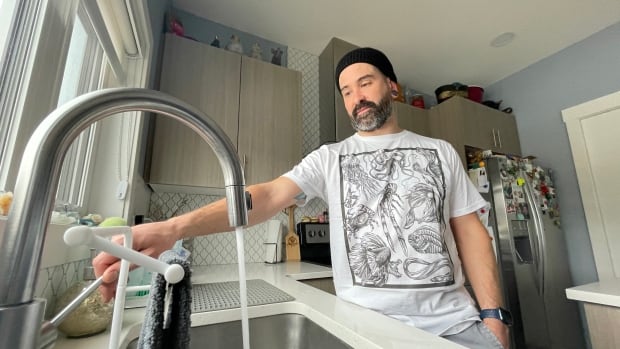 Kurtis Anderson says the water at his home in Regina’s south end smells and tastes terrible.

“It really just kind of smells like soil, like organic matter,” he said in an interview on Friday.

The problem, which began a few weeks ago, is not just limited to drinking water. His family’s clothes have the same cloying smell after being run through the wash, their dishes appear to be coated in something and even the water in the shower reeks.

“It seems to come and go a little bit, but there’s times where it’s really bad,” Anderson said.

On Friday, the CEO of the Buffalo Pound Water Treatment Corporation, which operates the facility, confirmed that the odd smell and taste is the result of a change in filtration.

The lake is only three metres deep, a kilometre wide and 30 kilometres long. Its shallowness means that during the summer a large amount of cyanobacteria grows in the water, affecting its taste and smell.

The facility uses granular activated carbon filtration to remove that bacteria, but only does so between May and November.

The shallow water at Buffalo Pound Lake means the rapid growth of cyanobacteria in the summer. (Alexander Quon/CBC News)

Shutting down the carbon filter allows for the carbon to regenerate over the winter. It is then reactivated in May.

It’s a process that has been carried out since the 1980s, Johnson said. But some people appear to notice when the water filtration changes. Johnson said the company receives a small number of reports every time that process happens, with the changes in smell or taste persisting for a few weeks.

“It’s perfectly safe. It’s an aesthetic issue. It may not smell or taste as good as it typically does, but it’s still safe to drink,” Johnson said.

For Anderson, the explanation offers no comfort.

He and his wife have tasted the tap water from the homes on either side of them as well as their child’s daycare. He said their home is the only one that has water that smells or tastes off.

“We’ve got a one-year-old, so we don’t feel it’s safe for him to to drink it until we know it’s completely safe to do so,” Anderson said.

More than a quarter of a million people get their drinking water from Buffalo Pound Lake and the water treatment plant. But it was built in the 1950s and hasn’t had a major upgrade for decades. We’ll hear about the latest plans to update it from Ryan Johnson, CEO and president of Buffalo Pound WTP.

Anderson dropped a water sample off at the Roy Romanow Labratory at the University of Regina just to be safe. He’s still waiting on the results.

For now, his family is purchasing five-gallon water drums.

Anderson said it has been hard to stop the reflex of filling up a glass of water at the tap.

“A lot of people have these concerns every day. So it’s just interesting to kind of put yourself in someone else’s shoes where they can’t just turn on the tap and have clean drinking water every day,” he said.

He said he is frustrated by the lack of communication from the City of Regina. His family’s initial complaints didn’t get them answers and they were only recently contacted about the change in filtration.

Anderson’s family is not the only one reporting the issue. Social media posts show the issue is being seen across the city. There’s no rhyme or reason to the location of the complaints.

Johnson admitted there have been more complaints than normal this year. They’ve been mostly limited to Regina, but he said he expects to receive some from Moose Jaw as well.

The plant does have an option of last resort that can resolve the issue — the introduction of a material known as powdered activated carbon — but a certain threshold on the water’s taste and smell has to be met for them to use it. That has not happened yet, he said, but the company will continue to monitor the situation.

There is good news on the horizon for those currently experiencing the undesirable water.

Impending upgrades to the water treatment plant mean that the issue will soon be a thing of the past.

“By the time we’re done in 2025, we will be able to treat it seasonal or year round,” said Johnson.