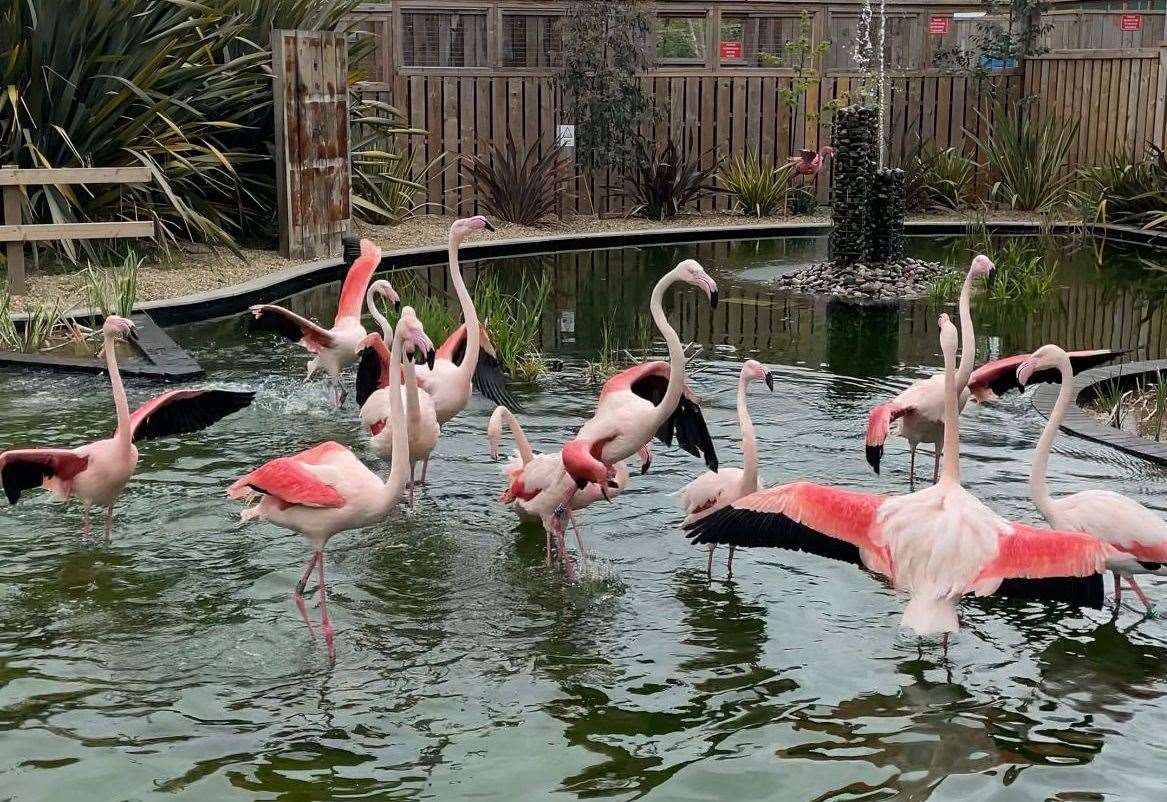 A flamboyance of flamingos have finally been freed to enjoy their enclosure at a zoo as bird flu housing restrictions are lifted.

The Fenn Bell Conservation Project in Hoo shared a video of their pink friends flying and splashing in their pond after months of being locked away.

The flamingos have finally been allowed out as restrictions lift

The site only welcomed the flamingos in October but by November keepers were forced to bring their animals inside as part of efforts to contain the UK’s biggest ever outbreak of avian flu which has seen more than 100 cases confirmed since the end of last year.

This meant that anyone keeping chickens, ducks, geese or other birds had to house them indoors by law for the past six months in order to prevent them from mixing with migratory wild birds who are most responsible for spreading the virus.

The flamingos have been in their inside enclosure since last year. Picture: The Fenn Bell Conservation Project

But last week the government eased some of its most stringent restrictions meaning birds were allowed outside again.

Staff at Fenn Bell said they are delighted to be able to see the 13 flamingos enjoying their larger pond and water fountain again.

In a bid to be more modern, owner Andy Cowell spent seven months building the flamingos enclosure including a water fountain and exotic trees to help the flamingos settle into their new home.

They were splashing around once released. Picture: The Fenn Bell Conservation Project

He also built an indoor area but this was only intended to be in addition to their outdoor facilities and not their only living space so it required adaptation.

Andy said: “Anyone who has ever seen a flamingo will know at least two things. They are pink, and that they love water.

“Their feed remained the same, and so they continued being pink as it is true that this colour comes from what they eat – however, providing them with water to wade in was harder.

“It required a lot of work to their enclosure, but basically we had to semi-permanently flood part of their floor.

“We did not know how long they would have to stay inside, and so we had to do our best for them.”

Andy Cowell, owner of The Fenn Bell Zoo and pub

Fenn Bell is the first licensed zoo in Medway can be found in Allhallows and is open to the public all year round.

The current Avian Influenza Prevention Zone will still be in force across the UK, with only the housing measures component of the current restrictions being lifted.

This means all bird keepers must still be diligent with cleaning and disinfecting equipment, clothing and vehicles, limiting access to their sites and making sure workers change clothing and footwear before and after entering all bird enclosures.

In a joint statement, the UK’s four chief veterinary officers said: “Whilst the lifting of the mandatory housing measures will be welcome news to bird keepers, scrupulous biosecurity remains the most critical form of defence to help keep your birds safe.

They have been allowed out since Monday. Picture: The Fenn Bell Conservation Project

“It is thanks to the hard work of all bird keepers and vets, who have played their part in keeping flocks safe this winter, that we are in a position to take this action.

“However, the recent cases of avian influenza show that it’s vital that bird keepers remain vigilant for signs of disease and maintain stringent standards of biosecurity.”

For more information on Fenn Bell visit their website here.