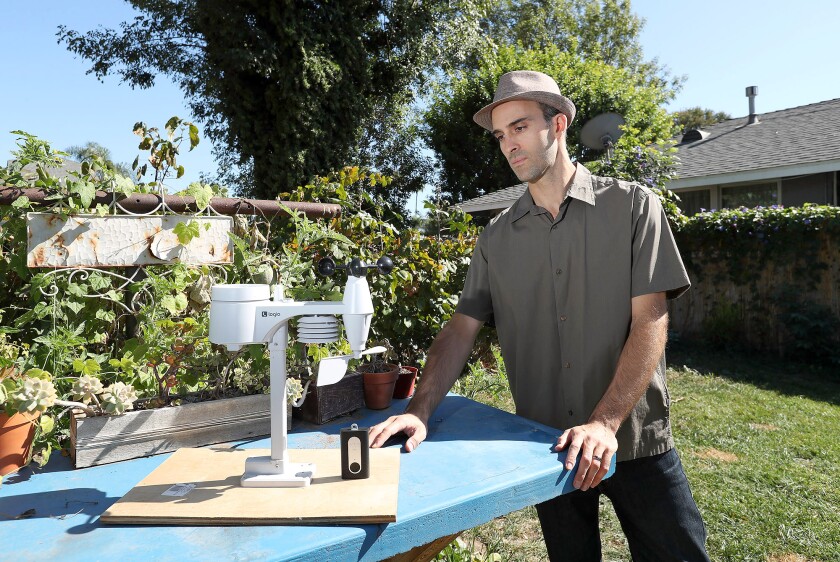 On a normal day, Kingspan Light and Air, a factory in Santa Ana’s industrial corridor, buzzes with workers welding, spray painting and manufacturing fiberglass to make energy efficient skylights for the Ireland-based corporation. An early morning shift in late August, though, promised to be anything but routine for Israel Maldonado and Micaias Pacheco.

Long concerned about the air they breathed while working, Maldonado, Pacheco and six co-workers wore mobile AtmoTube Pro devices as they planted stationary monitors in potential hot spot areas inside Kingspan’s two-building facility. They carefully followed instructions from previous training sessions: don’t bump the devices into any hard surfaces or stuff them in pants pockets. If anyone smokes a cigarette or uses hand sanitizer around them, make a note of it.

Most importantly, if management became curious about the small, black monitors slung around their necks or dangling off their belt loops, the workers were ethically bound to answer any questions about them, even if it led to being fired.

“The truth is I felt a bit nervous,” Maldonado said. “I’m not going to deny that. But as the hours passed, I saw that the managers didn’t say anything to me or my co-workers. We started gaining more and more courage. We had to find out how much pollution there was inside.”

At the end of their shifts, the workers collected all the stationary monitors and left without incident. For the next two days, they repeated the task.

The effort came amid a renewed union drive with the International Assn. of Sheet Metal, Air, Rail and Transportation Workers (SMART) that was unsuccessful last year. Kingspan responded to the initial campaign by raising wages, but worker concerns about indoor air pollution remained.

Israel Maldonado holds a AtmoTube Pro he used to measure the air quality of his workplace.

Masri, an air pollution expert, analyzed data from the monitors for his study, which measured fine particulate matter, an air pollutant that can pose health hazards in high enough concentrations.

The results, published this week under Masri’s independent consulting and research firm, appeared to confirm the workers’ worst fears; the average concentration of air pollution inside Kingspan’s two buildings exceeded outdoor levels in Santa Ana during last year’s wildfires by 25%.

“During the San Francisco wildfire plume, which carried to Southern California last year, the highest [level] I measured was about 80 micrograms per cubic meter on the AtmoTube Pro that I have here outside of my house,” added Masri, an Orange resident. “Those were levels that were causing public health agencies to warn people to stay indoors and avoid exercise.”

The average measurement inside Kingspan: 112.3 micrograms per cubic meter, which was nearly seven times higher than the readings found outside of the factory.

“To see workers being exposed to levels for hours at a time each day that were far in excess of what I have measured outdoors during wildfire events, it was just very shocking to me,” Masri added.

And sometimes, the devices maxed out, especially at welding stations like the one Pacheco works at; his readings registered a “very unhealthy” average by Environmental Protection Agency standards and topped AtmoTube Pro’s 1,000 micrograms per cubic meter limit at times.

“We don’t have good fume extractors,” Pacheco said. “Sometimes we’re welding for 10 hours and that generates a lot of fumes.”

Dr. Shahir Masri, an air pollution scientist with UC Irvine, stands with a few of his devices that monitor air quality. As part of his private consulting and research business, he authored a study on the indoor air pollution at a local Santa Ana factory, Kingspan, where workers wore air monitoring devices.

Masri’s findings helped form the basis of an Oct. 15 complaint filed with California’s Division of Occupational Safety and Health, or Cal/OSHA, by the workers against the company. Cal/OSHA inspectors followed up by visiting Kingspan this week after a delegation of workers asked management to allow them to choose whether to unionize with SMART or not without intimidation.

“We fully respect the employees legal right to organize and we are open to dialogue in this regard,” read a statement from Kingspan Light and Air. “We await a report following an inspection by the Division of Occupational Safety and Health (Cal/OSHA). The health and safety of our team is of paramount importance and we will comply with, and act on, any recommendations contained in that report.”

Kingspan is a relative newcomer to Santa Ana’s industrial corridor after having set up shop in 2016. Billing itself as climate conscious with a 10-year “Planet Passionate” pledge to reduce carbon emissions, Kingspan has about 166 factories worldwide and earned $5.5 billion in global sales last year. According to a half-yearly financial report, it reported record-breaking revenue and trading profits across the board through June 2021, including a 39% increase of “Light + Air” sales, as construction rebounded from the pandemic.

Prior to Kingspan, Masri’s recent work surrounded heavy metal soil contamination found in Santa Ana’s poorer, more heavily Latino neighborhoods. He turned to the question of air pollution next for a still-unpublished study that enlisted citizen scientists to take “toxic tours” around the city’s industrial corridor with AtmoTube Pro devices in order to address the concerns of a neighborhood council. 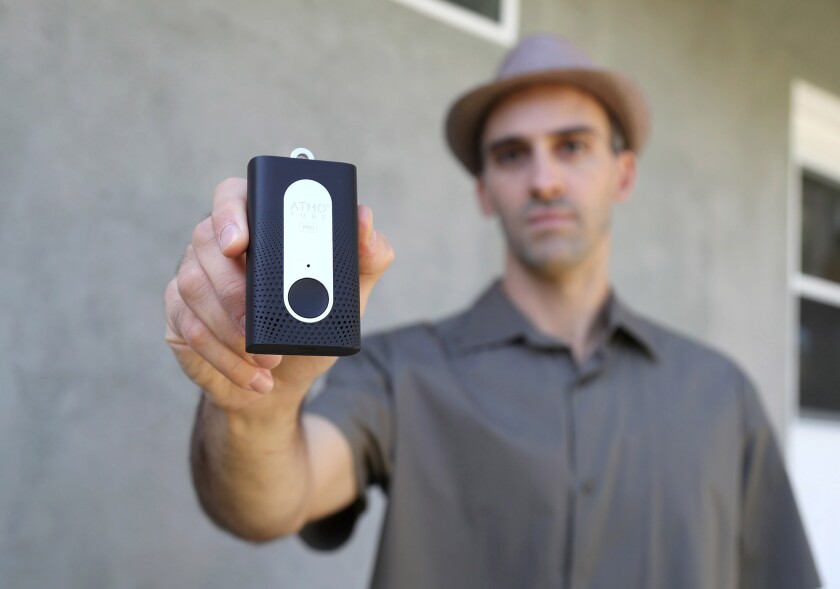 Dr. Shahir Masri stands with one of his devices that monitor air quality.

It was during the course of that community-oriented research that Masri learned of the situation at Kingspan and those same air monitors found new use.

His resulting report recommends simple fixes to improve ventilation and indoor air quality along with it, including safely opening any doors and windows that remain closed during working hours.

“This is unlikely to have an impact on the surrounding neighborhoods,” he said. “A more sophisticated level is equipping these workers with respirators and supplied air.”

The report also urges Kingspan to pick up where the workers left off by conducting continuous monitoring of indoor and outdoor air pollution levels with PurpleAir sensors as well as installing HEPA filters to improve ventilation.

It’s a course correction that finds favor with Maldonado.

“We started this campaign first and foremost for worker safety,” he said. “We’ve been without proper ventilation for some time.”

In the past, Maldonado said that a day’s work left his nasal passages full of dust while fiberglass shards stuck to his work clothes. In November, he fell ill with COVID-19 on the cusp of the winter surge that turned Santa Ana into an epicenter of infection. Maldonado believes that poor ventilation at Kingspan and the inability to practice social distancing on the assembly line played a role in his illness as well as many of his mostly Latino co-workers.

Many questions remain unanswered, including if the unhealthy levels of indoor air pollution measured by the workers correlate with any adverse medical conditions suffered by them. But in the meantime, Maldonado and Pacheco are looking for changes on the job that will literally be a breath of fresh air.

“We hope that by forming a union, it will help fix many things like bringing in good extractors,” Pacheco said. “The most important thing is our health, so that we can continue living and working.”

Support our coverage by becoming a digital subscriber.