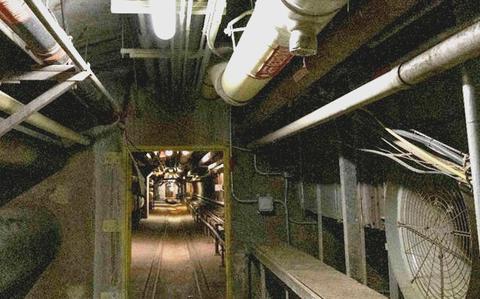 A photo of the lower access tunnel of the Red Hill fuel storage facility in Honolulu shows, upper right, the fire suppression system retention line that broke on Nov. 20, 2021, and released about 20,000 gallons of jet fuel. (U.S. Navy)

HONOLULU (Tribune News Service) — In a move to get out in front of the Red Hill water crisis, the Honolulu Board of Water Supply has launched a study to determine whether it will be feasible to treat water tainted by various petroleum chemicals and turn it into something clean and safe to drink.

Treating such contaminants promises to be a complicated process that will likely cost hundreds of millions of dollars and might yet prove too costly to undertake, according to BWS officials.

But the study, they said, is worth the effort as they wait to find out exactly how much of an impact the leaks from the Navy’s 79-year-old Red Hill Bulk Fuel Facility will have on the aquifer below it.

“It’s so incredibly critical that we take this on,“ Board member Na ‘alehu Anthony said at a recent BWS meeting. “It’s important that we have a firm understanding of what the water is doing in the aquifer, because if we don’t, we’re just going to struggle that much harder when it comes time to make decisions about where we’re putting millions of dollars of equipment down to make sure we can provide safe and clean drinking water to the island of Oahu.”

Navy studies have indicated that groundwater underneath and near the underground Red Hill tanks is contaminated with petroleum chemicals. Documents also show leaks dating back to 1947, plus ongoing corrosion of the tank liners.

The Honolulu Board of Water Supply shut down three of its wells in response to the Red Hill crisis as a precaution, and monitoring wells have been installed in the area in an effort to track the movement of contaminants in the groundwater.

In August the BWS announced that it had detected trace amounts of petroleum-related chemicals in a monitoring well in Moanalua Valley, elevating concern about the threat to municipal water sources.

“It’s important to know what’s happening to the aquifer—what’s in it, how’s it moving and when it could reach our wells,“ said Ernie Lau, the board’s manager and chief engineer.

That includes at Halawa shaft, Oahu’s largest and most productive well, which produces 20 % of the water—10 million to 20 million gallons a day—for more than 400, 000 residents and other customers from metropolitan Honolulu to Waikiki and all the way to Hawaii Kai. Halawa shaft is less than a mile from Red Hill.

But Kawata said that condition could very well change as contaminants migrate in the groundwater or if there are additional spills.

In the meantime, Halawa Shaft, Aiea Wells and Halawa Wells continue to be shut down, and the Board of Water Supply continues to lobby for installation and testing of additional monitoring wells and the draining of the Red Hill fuel tanks as soon as possible. The board is also pursuing the development of replacement water sources.

Kawata said the water treatment study presents a great challenge because of the many types of fuels that have been stored at Red Hill.

According to Navy reports, some 180, 000 gallons of various types of fuel have leaked from the Red Hill facility over the decades.

Since 1943, the tanks have been used to store a variety of petroleum-based fuels and chemicals, including heavier fuel oil that powers ships, automotive gasoline, aviation fuel, diesel, jet fuel, kerosene, heating oil, lubricating oils and solvents.

“We also don’t know what kind of additives were added to the fuel,“ Lau said. “It points to the complexity of our challenge here.”

He said it’s important to evaluate all of them because, for example, one treatment method more efficient at removing a certain contaminant might have no effect on another.

Also being considered is how each technology performs to treat varying levels of pollutants, from very high to very low concentrations.

“You see this in the data being collected by the Navy in the groundwater,“ he said, adding that, “It’s really going to end up being a combination of different kinds of techniques. Each has to be evaluated individually and in concert with each other to examine the feasibility and removal of a wide range of concentrations.”

Because of the multitude of variables, it’s likely that more than one treatment will have to be employed in the field to make the water clean and drinkable. And that will require the BWS to consider space requirements needed for treatment, a fact that may render water treatment infeasible at some sites.

Few utilities apparently treat their water for petroleum chemicals. Kawata said there are case studies in the literature, but they are extremely limited.

“Some of what we’re going to be doing will be groundbreaking,“ he said.

The estimated timeline for completing the treatment study is June 2023, he said, but a number of technical challenges so far suggest the timeline may have to be extended.