Our planet is changing. So is our journalism. This story is part of a CBC News initiative entitled “Our Changing Planet” to show and explain the effects of climate change. Keep up with the latest news on our Climate and Environment page.

Recently, we wrote about researchers ditching their gas stoves after measuring the high levels of dangerous indoor air pollution they produce.

Some scientists and chefs, concerned about the health and environmental impacts of gas stoves, are switching to electromagnetic induction stoves or even portable induction burners and touting some additional benefits.

These stories prompted some questions from readers. How does the energy efficiency of induction actually compare to gas? Do gas fireplaces or furnaces cause indoor air pollution too? Or propane stoves? Are newer gas stoves less polluting? Are induction stoves safe for those with pacemakers?

Here are the answers to some of those questions.

How energy efficient are induction stoves compared to gas?

Donald M. wrote: “What is the actual energy use comparison, when for example bringing a pot of water to a boil between a new natural gas burner and an induction stove top?… Also how does that compare in dollars and cents?”

Energy Star is the energy efficiency certification and labelling program supported jointly by the U.S. Environmental Protection Agency and the U.S. Department of Energy that aims to promote the adoption of energy-efficient products and practices. A similar system exists in Canada in partnership with the federal government.

It says induction cooking tops transfer energy with approximately 85 per cent efficiency, compared to about 32 per cent for gas stoves (which transfer much of their heat to the surrounding room, not the pot and water you’re boiling). The per unit efficiency for induction stoves is five to 10 per cent higher than for conventional electric resistance stoves and induction is three times more efficient than gas. EnergyStar says that if all cooking tops sold in the U.S. in 2021 used induction technology, the energy cost savings would exceed $125 million US and the energy savings would exceed 1,000 gigawatt hours. That’s roughly equivalent to the amount of electric power consumed annually by 93,000 U.S. households.

Where do the pollutants come from when cooking with gas?

Dave R. of Innisfil, Ont., asked if the nitrogen oxides — contaminants linked to negative health impacts such as asthma — are naturally found in small amounts in the gas or come from burning it.

The answer is that they’re produced during burning, when nitrogen and oxygen in the air react with each other due to the heat from the burning gas.

Meanwhile, carbon monoxide is produced by incomplete combustion of the gas.

Eric Lebel, research scientist at PSE Healthy Energy in California and lead author of a recent study on pollution from gas stoves, said his team is starting to look at natural gas composition in different cities, including Toronto and Vancouver.

While it’s mostly methane, he said, “there could be other pollutants in the gas as well.” Those could include volatile organic compounds and sulphur compounds used to make natural gas — which is normally odourless — smelly and therefore detectable when there are leaks.

WATCH | Why gas stoves are bad for the climate — and you:

Why gas stoves are bad for the climate — and you

Of course, some pollutants are generated from heating cooking ingredients such as oil and fat (and any food you burn) regardless of what kind of stove you use, so turning on the hood fan is a good idea.

Do propane cooktops have the same issues as natural gas cooktops?

While our stories dealt with natural gas stoves, Peter Gosse of St. John’s, N.L., has a different kind of gas stove, and wrote in to ask how it compares.

University of Saskatchewan professor Tara Kahan, who has studied pollution from stoves, said high levels of nitrogen oxides are also emitted during cooking with propane stoves, so the health impacts would be expected to be similar: “From an air quality perspective, it’s not an obvious improvement over methane.”

Lebel said the pollution from cooking with propane is something his team is “actively studying.”

LISTEN | Cooking without gas: Why cities are cutting methane from homes:

What On Earth29:58Cooking without gas: why cities are cutting methane from homes

Some municipalities are taking natural gas out of buildings in a shift to a greener future. Laura Lynch checks in on two towns on either side of Lake Ontario, both leading the way. 29:58

He acknowledged that the climate impacts are expected to be lower with propane. That’s because natural gas is made of methane, itself a greenhouse gas much more powerful than carbon dioxide. Lebel’s research showed it leaks into the atmosphere even when the stove isn’t in use.

“We aren’t as concerned about leaks of propane since it isn’t a strong greenhouse gas like methane is,” Lebel said. “However, CO2 is still produced upon burning it, the same way that it is produced from methane.”

As part of Lebel’s study, researchers looked at stoves that were between three and 30 years old.

The study found no relationship between either the age of the stove or the purchase price when it came to methane or nitrogen oxide emissions, once the energy output (which affects emissions) was taken into account.

Rob Jackson, a professor at Stanford University who co-authored that study, said there are lots of connectors running between the stove and the natural gas networks, all of which leak a little. “Often, even when they’re installed properly, there’s no way to seal the system properly.”

WATCH | The debate over gas and induction stoves:

The debate over gas and induction stoves

Maintenance may reduce CO emissions to some extent. In the U.S., since 1926, kitchen ranges have been allowed to emit up to 800 ppm of CO (far higher than the Environmental Protection Agency exposure standard of nine ppm), according to an article by T.H. Greiner, an engineer with Iowa State University: “A new range may emit as much as the old range.” However, the article says field technicians report that most kitchen ranges can be tuned to produce less than 50 ppm.

What about the pollution from gas fireplaces and furnaces?

Lorraine M. asked: “Any research done on gas fireplaces and furnaces having the same effect as stoves?”

While gas fireplaces, furnaces and hot water heaters all burn and leak methane, and are thus a concern from a climate perspective, Lebel and Jackson say there’s less of a worry than with gas stoves from a health perspective.

That’s because, unlike stoves, they are generally required to have a vent (or chimney) to the outside.

Jackson said, “I don’t really expect gas fireplaces to be that big of a source of indoor air pollution.” But he added that his team is starting to measure them to find out for sure. 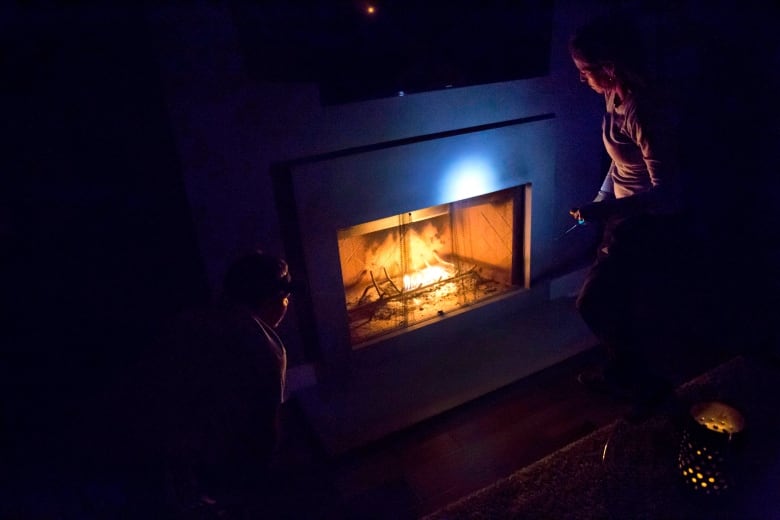 Gas fireplaces are expected to generate less indoor air pollution compared to stoves, as they’re required to be vented directly outside. However, researchers say they’re going to do studies to directly answer that question. (David Goldman/Associated Press)

Furnaces and water heaters also tend to be in areas such as basements, where people spend less time than in kitchens.

That said, Michael Thomas, founder of Carbon Switch, blogged out his experience measuring nitrogen oxides in his home earlier this year, and found they spiked in the early morning when the furnace was on, suggesting that pollutants were leaking from the furnace.

If I have gas appliances in my home, is there a way to test the pollutants in the air?

Thomas tested his air with an air quality monitor that he purchased online. He said the ones that measure nitrogen oxides are, unfortunately, expensive (about $300 US; one Canadian retailer is selling the model Thomas has for more than $450 Cdn) and hard to find. 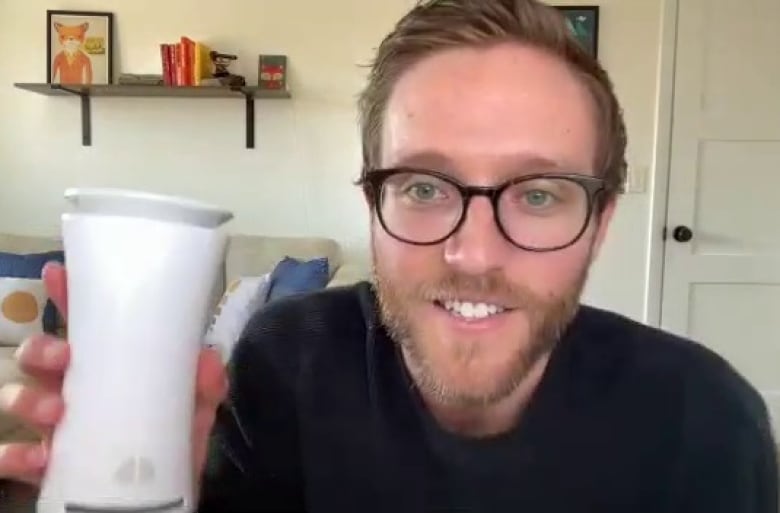 Michael Thomas holds an air monitor that he used to measure the air quality in his home. He says devices that measure nitrogen oxide pollutants tend to be expensive and hard to find. (CBC News)

If you’re interested in other kinds of pollutants and you live in Toronto or Vancouver, you can volunteer for the next part of Lebel’s study, which takes place in May.

This part of the study won’t test for pollutants from burning the gas, such as nitrogen oxides, but pollutants in the unburned gas from your stove.

Is it true that people with pacemakers can’t use induction stoves?

It’s true that the magnetic fields generated by induction stoves can interfere with devices such as pacemakers and insulin pumps.

Organizations such as the British Heart Foundation and induction stove manufacturers say people with such devices should keep them 60 centimetres away from an induction cooktop when it’s on. 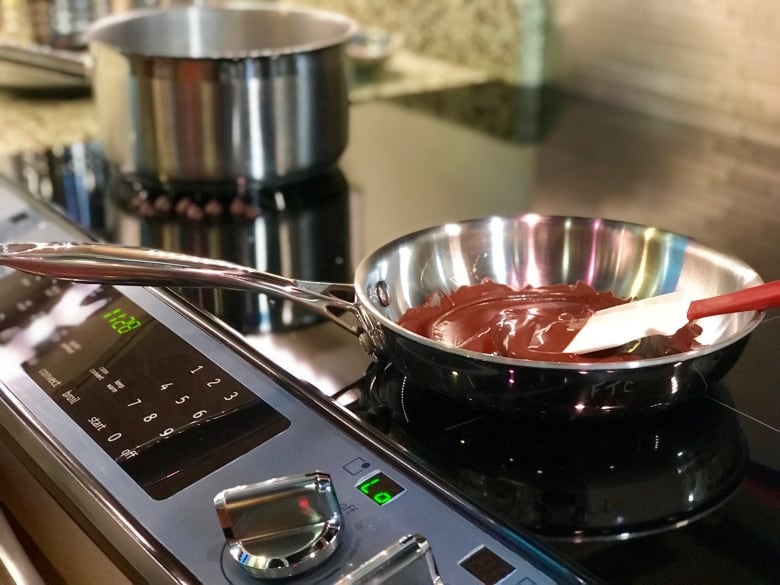 Induction stoves have been touted as a speedy and powerful alternative to gas stoves. However, people with pacemakers are advised to stay 60 centimetres from the cooktop while it’s on. (Kim Brunhuber/CBC)

Have questions about this story? Send an email to [email protected]