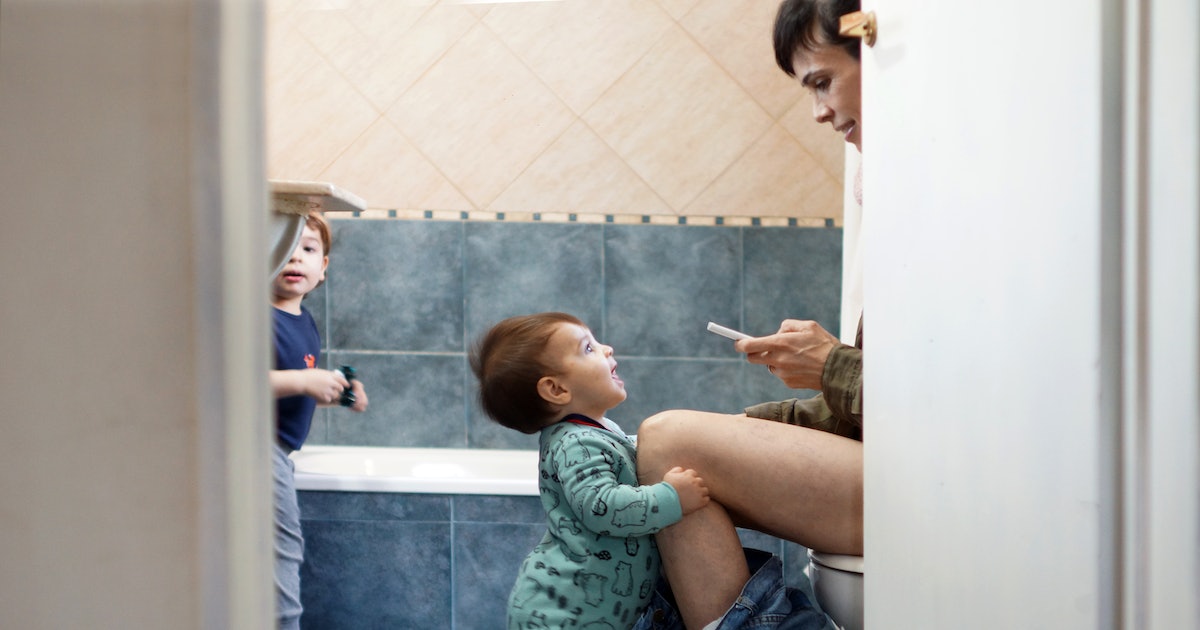 The loo is a parent’s breakroom. We hide in the bathroom to get five minutes away from our kids (unless they barge in anyway) and a minute away from our partner. Sometimes new moms head to the bathroom to curse or mutter or cry or text, but mostly, let’s face it, we go in there to scroll. Which got us thinking, especially after all the news about taking shoes off at the door: Is taking the phone into the bathroom a filthy habit?

We don’t need a scientist to tell us that our phone might pick up germs in there. But MetroUK interviewed Ron Cutler, director of biomedical science degrees at Queen Mary’s University London, and he made it expert-official. “Basically, you just shouldn’t (take your phone into the toilet) if you are at all concerned about the transfer of viruses and fecal contamination,” Cutler said.

We Are Gonna Do It Anyway

“We are all guilty of using the phone in the bathroom. I will admit I do it daily,” says Jonathan D Sexton, Ph.D., a researcher at the Environment, Exposure Science and Risk Assessment Center (ESRAC) at the University of Arizona who has studied disinfectants and sanitizers. “The way I look at it is, I go into the bathroom and sit down but don’t touch highly contaminated sites. I touch my clothes and phone. I always suggest putting your phone in your pocket or purse prior to wiping and flushing.”

According to Sexton, the key is not sitting the phone down on your bathroom floor or sink while you wipe, flush, and wash your hands. “This is the part of using the bathroom that contaminates hands and creates aerosols that can deposit on a phone that’s set on the counter or floor.”

So once you’re ready to wipe and flush, phone time is over and into your pocket it goes. Or at least try something like wrapping it in a clean washcloth before you set it on the side of the tub. After all, we’re talking about the home bathroom here, and for all we know you’re pants-less.

Listen, we’re a judgment-free zone, and as Time Magazine points out, reading on your phone in the bathroom is just the natural extension of reading in the bathroom, which humans have been doing for generations.

It’s also no secret that moms are occasionally forced to pump in a bathroom. It can be done, if you approach the whole thing with similar pumping sanitation guidelines in mind (clean hands, no pump parts directly on bathroom surfaces.)

Per Always, Washing Is Key

“Washing hands after each toilet event is the most important advice,” Sexton says. It also buys you one last minute in there before you need to exit and resume being center of the family universe.

But one more note. Deep breath! A 2012 study from the same University of Arizona showed that the average phone has 10 times more bacteria than the average toilet seat. That’s not necessarily a phone that’s been dragged through a bathroom; that’s just the average phone. So, no surprise, Sexton says, “I’d also recommend you occasionally wipe your phone off with a disinfecting wipe.”