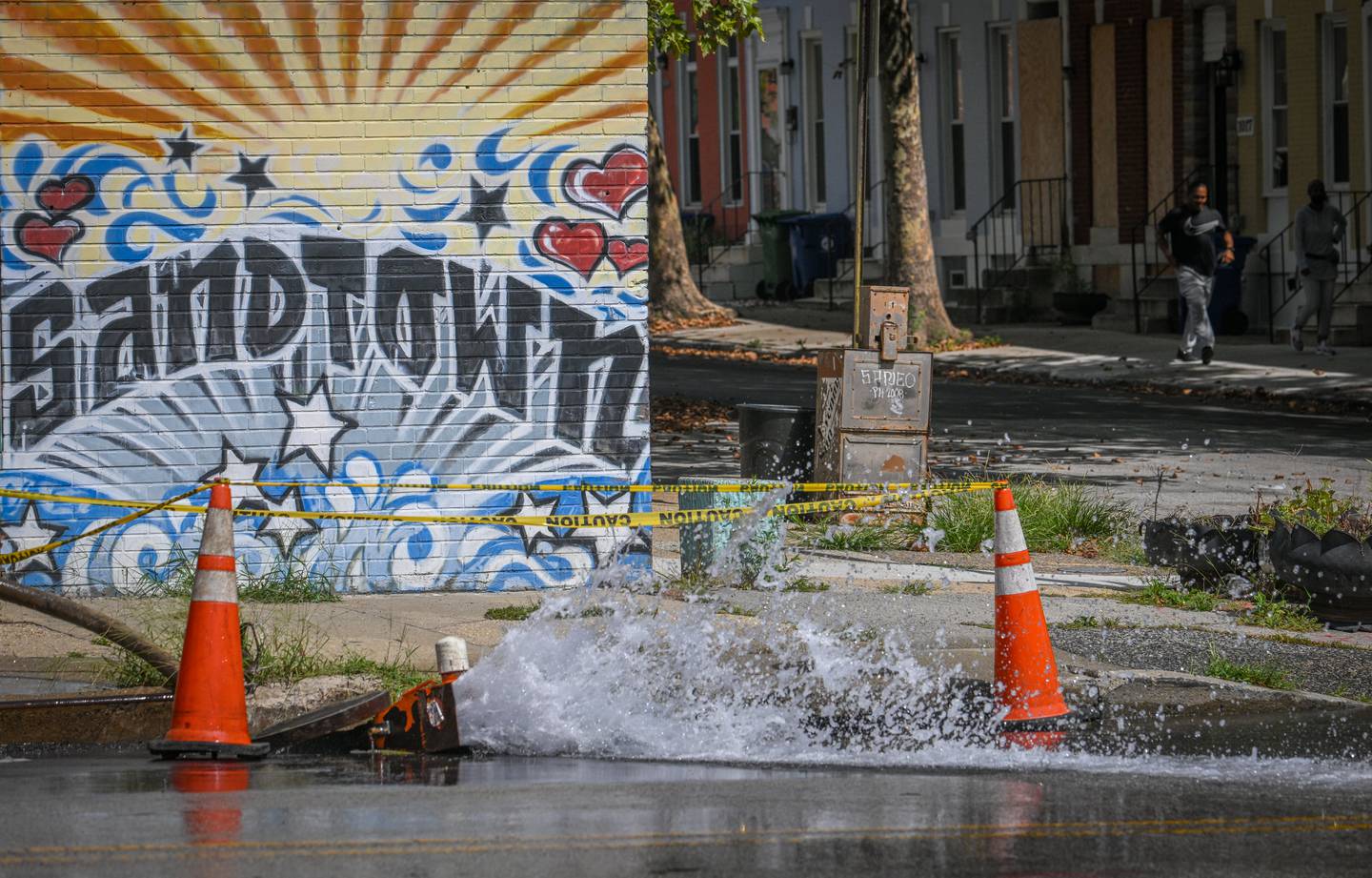 When it happened, grocers said the rush on bottled water was equivalent to what they saw just before New Year’s Eve during the Y2K scare. It was February 2000, and some Baltimore residents had been told to boil their drinking water.

The city — and the world — had passed Jan. 1, 2000, without a predicted massive computer breakdown based on the concern that some older systems couldn’t distinguish between dates in different centuries.

Now, Baltimore was grappling with the news that 1.5 million gallons of water hadn’t been properly filtered at the Ashburton Water Filtration Plant. But after residents cleared store shelves of the bottled kind, the city reported four hours later that the inadequately filtered water had been diverted out of the drinking water system and there was no threat to public health.

”Like Y2K, the fear was worse than reality,” The Baltimore Sun wrote at the time.

Some 22 years later, the city’s next boil water advisory spanned about four days, after city officials discovered E. coli contamination in drinking water samples from three buildings in West Baltimore. More than a week after the advisory was lifted, though, officials still don’t know precisely what caused the string of positive E. coli tests on Labor Day weekend.

Water is flushed from a hydrant in front of Fire Station 8 in Baltimore. (Jerry Jackson/Baltimore Sun)

The Department of Public Works has said the problem didn’t stem from one of the city’s three treatment plants this time. So, the search for the source turned elsewhere, including to the miles of pipes below ground that transport water from treatment plants and holding areas to faucets around the city and in neighboring counties.

The size of the system complicates the quest for clarity, officials say, and raises the possibility that the city may not be able to definitively identify the point of contamination.

“The conclusion of our investigation may not yield one definitive source, if you will. It might be a combination of sources,” said Yosef Kebede, the department’s bureau chief for water and wastewater, during a City Council hearing Thursday about the contamination. “And we may have to follow that by saying that, ‘We have a high degree of confidence,’ as opposed to saying that definitively: ‘This is the source.’”

A departmental analysis of the problem could come soon, Kebede said.

“I wouldn’t say months. I would say maybe a couple of weeks,” he said.

[ For West Baltimore neighborhoods, water contamination is yet another crisis that compounds intractable inequities ]

It’s possible the department never will conclusively trace the source of the bacteria, said Upal Ghosh, a professor in the University of Maryland, Baltimore County’s chemical, biochemical and environmental engineering department.

For example, there could be areas within the city’s pipes where water wasn’t moving, allowing bacteria to grow as chlorination decayed, Ghosh said. A change in pressure elsewhere in the drinking water system could have caused bacteria in such sections to bleed into the larger system, Ghosh said.

After the positive E. coli tests, officials flushed out the system with more chlorinated water than normal to kill any harmful bacteria, letting fire hydrants gush water onto streets around the neighborhood. That removes potentially contaminated water and replaces it with more recently treated water.

“You would not know retrospectively what specific section that was,” Ghosh said. “But maybe people who understand how the network works — the potential points where water could be sitting and stagnating for a period of time to cause something like this — will be able to figure it out.”

In the West Baltimore neighborhoods at the epicenter of the crisis, Harlem Park, Sandtown-Winchester and Midtown-Edmondson, the city’s lackluster communication about the contamination stirred distrust, and vague answers may not improve matters.

A hydrant being flushed is seen at the corner of Mosher and Mount streets in West Baltimore. (Jerry Jackson/Baltimore Sun)

The city first received a positive E. coli result in Harlem Park on the Saturday before Labor Day. Regulations required it to retest the water before sounding the alarm. But even after a test confirmed Sunday the presence of the potentially hazardous bacteria at three buildings, communication didn’t go out to the public until Monday morning. Even then, it was via a series of tweets and Nextdoor posts that city lawmakers have blasted as insufficient.

It was the latest public challenge for the city’s Department of Public Works, which has struggled to manage its wastewater treatment plants, causing pollution woes in the Back and Patapsco rivers, and to pick up garbage and recycling in a timely fashion during the coronavirus pandemic.

The department says its search to pinpoint the origin of the water contamination continues in earnest. Public Works Director Jason Mitchell said there were two water main breaks in that area that could have contributed, and a number of construction projects were underway. Officials also are exploring other, previous disruptions in the water infrastructure to determine whether they could have played a role, including sinkholes at the foot of the Ashburton Dam and along North Avenue.

“We’re looking at all the construction activity and all the things that were going on to figure out what could have reduced the chlorination levels,” Mitchell said.

Workers stand July 5, 2022, next to a sinkhole in the 700 block of E. North Ave. in Baltimore. (Jerry Jackson/Baltimore Sun)

In a system where the average age of pipes hovers around 75 years old, water main breaks are an important possible culprit to evaluate, since they can lower water pressure, said Birthe Kjellerup, an associate professor at the University of Maryland’s department of civil and environmental engineering.

Maintaining pressure is a key part of the system, she said, because if breaks happen, water needs to rush out — not in.

“Baltimore is famous for water main breaks — and those are just the mains that we hear about here and there,” she said. “With that old infrastructure that is in Baltimore, it is not unlikely that even though it is a pressurized system, that there could be some leaks, because it’s only as safe as any kind of break.”

Kebede said public works staffers also are investigating whether the problem could have started at the Vernon Pumping Station near Druid Hill Park, which was taken offline in late August for a repair and brought back online Sept. 5.

That station pumps treated water stored in Druid Hill Lake into a zone that includes the parts of the city and county that fell under the boil water advisory. But only three sites ever tested positive for E. coli or coliform, all of them in those West Baltimore neighborhoods.

Drinking water in Baltimore comes from three reservoirs in Baltimore County — Loch Raven, Liberty and Prettyboy — before being treated at one of the city’s two treatment plants. From there, the water either flows through the pipes by gravity to homes and businesses, or it is stored for pumping at places like Druid Hill Lake.

Two water storage tanks under construction in 2021 at the west end of the lake in Druid Hill Park in Baltimore. (Jerry Jackson/Baltimore Sun)

As the search for answers persists, water sampling efforts have returned to their normal frequency, Kebede said.

The area that was covered by the recent boil water advisory was last tested for E. coli on Sept. 13 as part of routine monitoring efforts, and came back negative, Kebede said. The city has 90 sample sites, and each one is tested weekly, said Jack French, a spokesman for Democratic Mayor Brandon Scott, in a statement.

Because the boil water advisory has passed, the city is allowed to return to its normal testing regimen. But officials could consider additional testing in the affected area to bolster confidence in the system as they continue to search for the source, Kjellerup said.

“Good practice would be to do that more frequently,” Kjellerup said. “So, step it up. Double it. Triple it. Something about that.”

That being said, the department’s repeated negative tests in those key neighborhoods are a clear indication that lifting the boil water advisory was appropriate, Kjellerup said.

“It is common practice to do exactly what they did — and should be common practice. And I understand that people might be worried that it’s not sufficient,” she said. “But as far as I understand, they have had multiple days, maybe a week of continuous monitoring, seeing that there is no E. coli in multiple samples.”

During Thursday’s hearing, Kebede said officials focused on flushing the system to ensure chlorine is more evenly distributed throughout.

“We’ve ensured that there is better blending to make sure that there is adequate chlorine residual, but we haven’t necessarily upped the dosage at the plants,” Kebede said. “It’s a balancing act. Too much chlorine contributes to what we call disinfection byproducts, which are carcinogenic. So, we have to be within a sweet zone, if you will.”

Drinking water currently leaves the city’s treatment plants at a concentration of about 1 milligram of chlorine per liter, French said. Raising it to 2.5 milligrams per liter would require notifying dialysis centers, since the more heavily chlorinated water could endanger their patients. Raising it to the EPA’s maximum of 4 milligrams would require a public notification, French added.