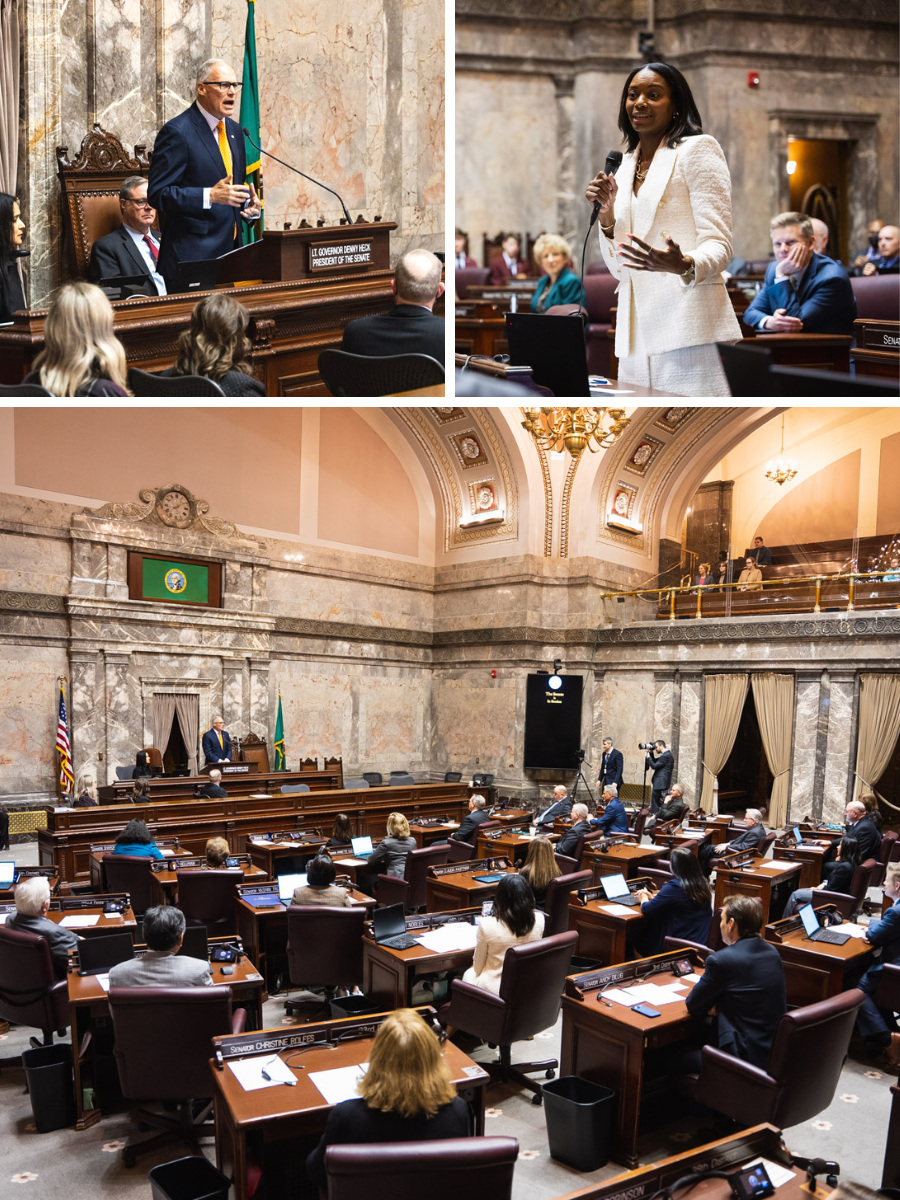 Monday was Martin Luther King Jr. Day, an occasion proclaimed by Gov. Jay Inslee to be a “day on” in service rather than an idle holiday. The state Senate has not been idle of late, passing important legislation to address the “inseparable twins” of economic injustice and racial injustice as described by Dr. King.

The governor’s and the state legislature’s efforts have led to improved pay, protections, and career mobility for workers, qualifying Washington as the best state to work.

Dr. King decried economic repression as a primary implement of racial subjugation: “Certain industries are based upon the supply of low-wage, underskilled and immobile nonwhite labor,” said Dr. King in a 1966 letter. In Washington state, the actions of lawmakers have simultaneously diminished the “inseparable twins” of economic and racial injustice. 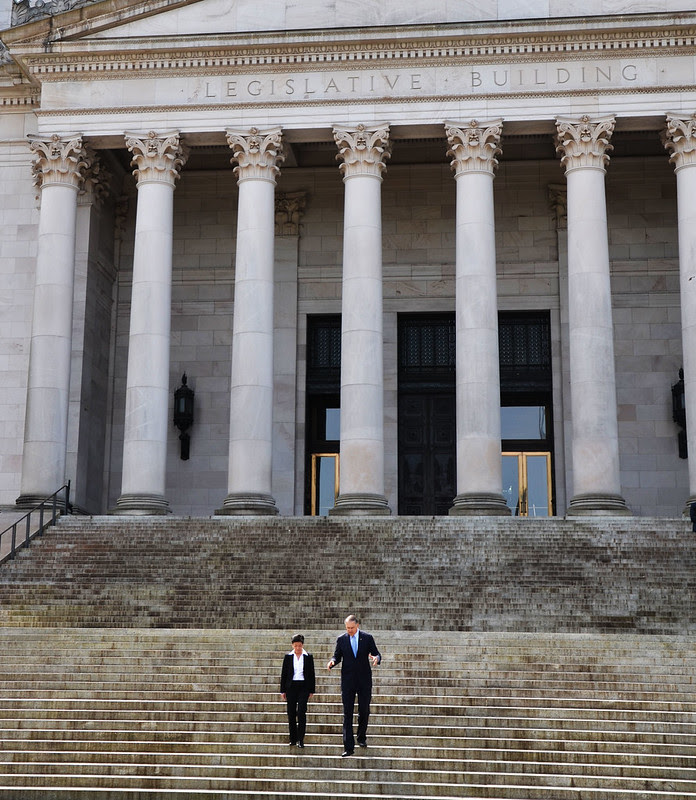 Gov. Jay Inslee walks with state Supreme Court Justice Mary Yu down the steps of the Legislative Building after her appointment in 2014. Justice Yu was sworn in to begin her third term earlier this month.

Seeing a wide range of lived experience and perspectives among the ranks of civic and government leaders has a powerful effect, particularly for communities of people who have historically been denied a seat at tables of power.

For Gov. Jay Inslee, who has sought to improve equity across Washington’s legal justice system, increasing diversity on court benches has been an ongoing effort. He has sought to appoint judges and justices at every level of the court system that ensure the state’s courts are more reflective of the people they serve.

As efforts continue to change the face of Washington’s justice system and root out inequities, Washington is moving closer to that ideal.

Read the full story on the governor’s Medium 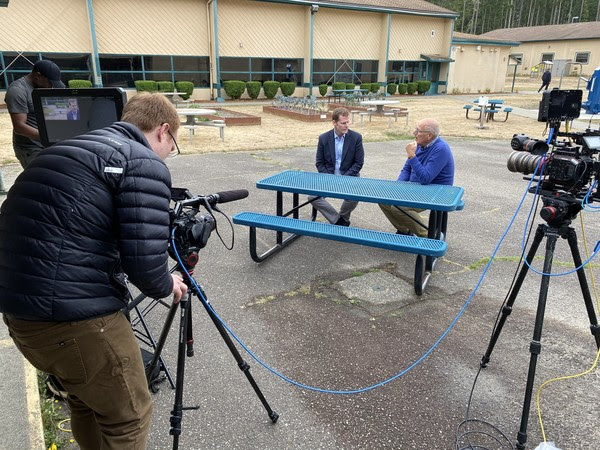 State Department of Corrections official Christopher Poulos is interviewed by NBC correspondent Harry Smith about Poulos’ incarceration and how that experience has informed his service to the state.

According to the U.S. Department of Justice, prisons serve a dual purpose to protect society by confining offenders, and assisting offenders to become law-abiding citizens. The latter mission, that of rehabilitation, has been a sustained focus for the Washington state Department of Corrections (DOC). Their mission statement, “to improve public safety by positively changing lives” reflects that priority.

DOC Secretary Cheryl Strange appointed Christopher Poulos as director of person-centered services in October 2021. His mandate is to inform plans to improve reentry success, and he borrows from his owned lived experience to deliver. Prior to his work at DOC, Poulos led the Washington Statewide Reentry Council established in 2016.

Poulos served nearly three years in federal prison on felony drug charges. Upon his release, Poulos charted a new course for himself as an attorney, and later as an advisor to the White House on drug control policy. Poulos is now diminishing adversarial relationships common between corrections staff and incarcerated individuals, improving the wellness among both groups, and strategizing to better prepare those who are incarcerated for their return to society.

Poulos joined Gov. Jay Inslee on a trade mission to the Nordic countries in 2022 to learn from Norway’s method of restorative justice, bringing back lessons to apply to Washington’s corrections model. That international exchange is ongoing; the Amend Project recently visited a women’s prison in Washington state to impart Norwegian ideals to improve relations between staff and incarcerated individuals.

Poulos’ story was featured on The Today Show this week.

Legislators continued a full schedule of public hearings this week, including a high turnout hearing for a package of gun safety bills requested by Gov. Jay Inslee and Attorney General Bob Ferguson. Legislators moved forward a bill to increase minimum wage standards for incarcerated workers, and held hearings on bills to establish a 45-minute minimum recess requirement for elementary students, to establish a “Baby Bonds” program aimed at closing the intergenerational wealth gap, and legislation requested by the governor to strengthen local planning efforts around climate change and resiliency and boost riparian and salmon recovery .

To address increasing numbers of vehicle collisions and fatalities, legislators are considering a bill to lower the state’s blood alcohol content limit from .08% to .05%, a move Inslee is supporting as a way to discourage driving under the influence. After Utah adopted such a limit in 2019, they saw encouraging changes in behavior and reduced numbers of fatalities.

U.S. Senator Patty Murray visited the state capitol this week. She held an event with legislative leaders and child care advocates to celebrate new federal funding for child care access and workforce training, as well to highlight the importance of the Fair Start for Kids Act passed by the state Legislature and signed by Inslee in 2021. The Act is spurring big changes to further improve access, affordability and workforce opportunities in the child care sector.

The 105-day session is scheduled to end April 23. You can watch every hearing and every minute of floor action on TVW.org. Information about bills, committee schedules and how to contact your legislators is available at leg.wa.gov.

Camp Hope continues to shrink as unhoused people are brought inside

Gov. Jay Inslee’s Rights of Way Safety Initiative is removing unsafe encampments along roadways statewide with a mission to transition people experiencing homelessness to safe shelter and supportive services. The program includes Camp Hope outside of Spokane. Once as large as 600 people, the encampment is currently occupied by 138 people as more people are brought inside by the program.

Assunta Ng operated a Chinese-language newspaper in Seattle for 41 years. This week, Ng’s Seattle Chinese Post and Northwest Asian Weekly will print for the last time. Northwest Asian Weekly will continue online. Gov. Jay Inslee acknowledged her contributions this week, saying, “Assunta is a ground-breaker, truth-teller and community-builder… her influence will remain as strong as ever.”

As many as 38% of American homes have gas stoves, which decades of research have found to deteriorate indoor air quality. Combustion of methane gas create nitrogen oxides that can concentrate to dangerous levels. A new paper has estimated a 35% increase in risk of asthma for children living in homes with gas stoves. Washington state’s updated building codes promote electrification of household heat and stoves to reduce emissions and improve health.

154,585 more calls and messages reached the national 988 helpline in 2022 than 2021. In Washington state, culturally-specific lifelines established for veterans, LGBTQ+ youth, and native populations are providing personal support for at-risk groups. Washington is among the few states with a plan to use 9-8-8 as a pathway to creating a more responsive behavioral health crisis response system.