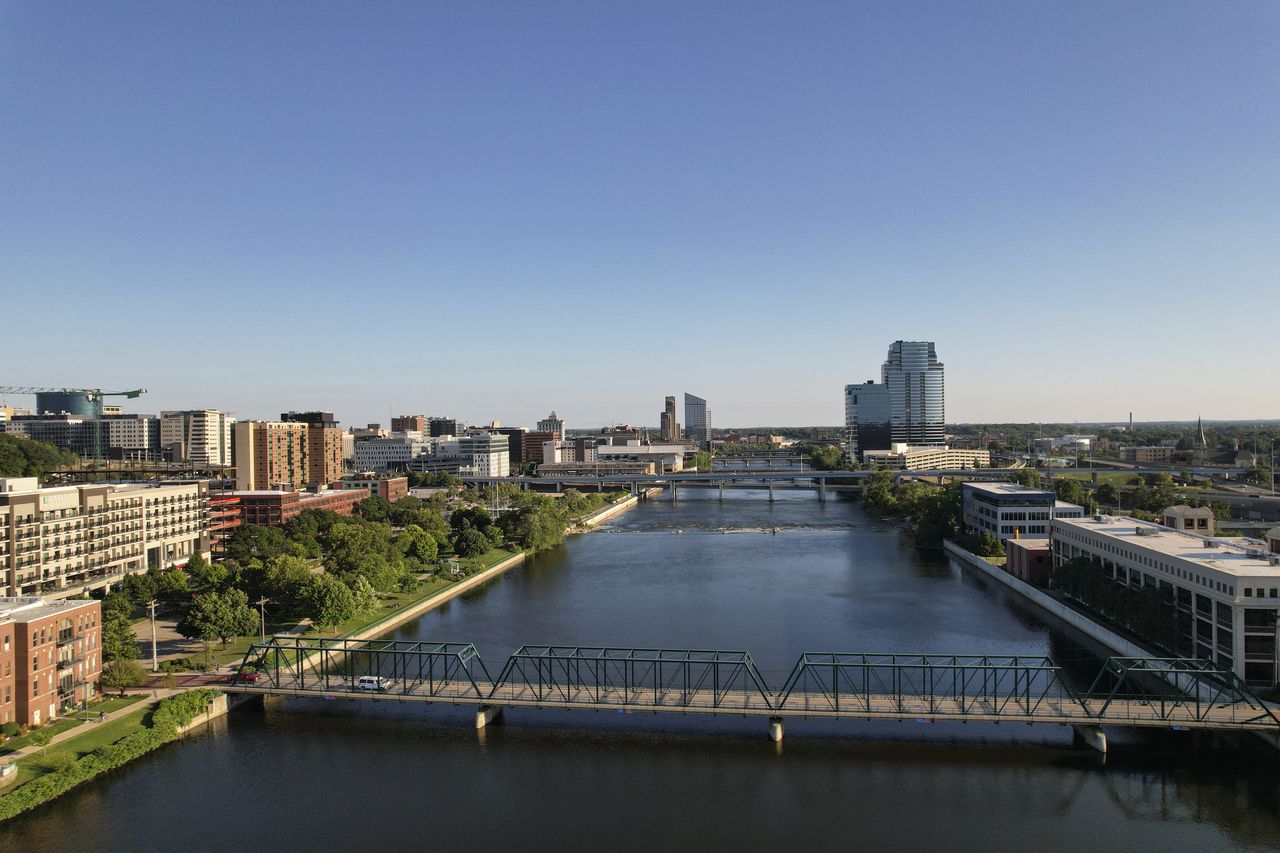 GRAND RAPIDS, MI — As officials work to restore the Grand River’s rapids, a move designed to boost tourism, recreation and activity along the waterway, a new partnership is aiming to provide a clearer picture of the river’s water quality.

The city of Grand Rapids and the U.S. Geological Survey (USGS) have teamed up to install an interactive water quality station at the Sixth Street Bridge.

Using a mobile phone, residents can scan a QR code on the monitoring station to view real-time data on indicators such as temperature, clarity of the water, and dissolved oxygen levels.

“We’re really trying to engage the public with the data,” said Michael Staal, a project manager with the city who works on river restoration. “We’re trying to provide them with that actionable data in an easy-to-understand way.”

Officials say they’re hopeful the water quality station, a three-year pilot with the city and USGS, will provide greater transparency and reassurance about the health of Michigan’s longest river.

While the city has made infrastructure upgrades to improve the water quality, the Grand’s legacy of industry and pollution have left some residents unsure about its safety at a time when officials want to create more parks, recreational opportunities and development along the waterway.

“Can I touch the water? Can I be in the water?” he said, recalling questions residents asked during events to gather input about efforts to add more parks and features along the river in Grand Rapids.

“Our environmental services department has been testing the water for 40 years, and really what we’ve seen is water quality is fine most of the year. But after large rain events, we do see those spikes in E. coli.”

E. coli is a bacteria that can be dangerous in elevated levels, and its presence can be indicative of fecal contamination and disease-causing bacteria in the water.

The Sixth Street Bridge water quality station does not measure E. Coli levels. However, officials hope to use data gathered by the device to create a model to generate predictive estimates about E. coli concentrations in the river.

“The city is going to be able to ingest that information, and then they will be able to then use that information to determine the risk of being in the river,” said Todd Stuntebeck, a physical scientist at the USGS Upper Midwest Water Science Center.

A predictive E. coli model is needed because conventional E. coli testing can take four to 18 hours, officials say. By that time, the water in question has continued to flow downstream and is long gone.

Eventually, once the E. coli detection model is developed, the city would use it to inform residents about the safety of being in the river, Staal said. That could include the installation of electronic beacons at major access points on the Grand, modeled after the green, yellow and red flag systems used at Lake Michigan beaches.

“People could make an informed decision on whether they want to use the river,” he said.

Elevated E. coli levels in the Grand can occur when rain washes contaminants such as untreated human and livestock sewage into the river.

The city of Grand Rapids has worked to reduce elevated E. coli levels by adding green infrastructure and separating combined sanitary and storm water sewers that would occasionally overflow during heavy rainfall and spill raw sewage into the river.

Despite that, the bacteria still occasionally spikes to levels the state considers unsafe, Staal said.

He pointed to a city report showing such spikes occurred at least a dozen times between 2000 and 2008. He said the figure is likely an undercount because the data was gathered on a monthly or quarterly basis, not after every large rainfall when E. coli levels can spike.

I’m not saying “it has happened only 12 times overs the last 20 years,” Staal said. “I’m just saying for our monthly and quarterly testing we have done that these are the test results that we have found.”

Despite the occasional E. coli spike, Staal said the river’s water quality is improving. He highlighted a city report showing the water quality index for the Grand River in Johnson Park in Walker, downstream from Grand Rapids, had improved from a score of 71 in 1985 to a score of 74 in 2020.

The index takes into account E. coli and other pollutants, he said.

“You can see the quality of the Grand River is improving because of the intentional investments that we’ve made,” Staal said.

Peter Wampler, a geology professor at the Frederik Meijer Honors College at Grand Valley State University, has studied the Grand River He said the health of the waterway has improved over the past few decades, and that it’s safe for recreational activities such as kayaking or wading.

“Swimming — maybe not yet,” he said, pointing out that residents would want to avoid getting the water in their mouth.

Re(turn) To The River festival happening Saturday in Grand Rapids