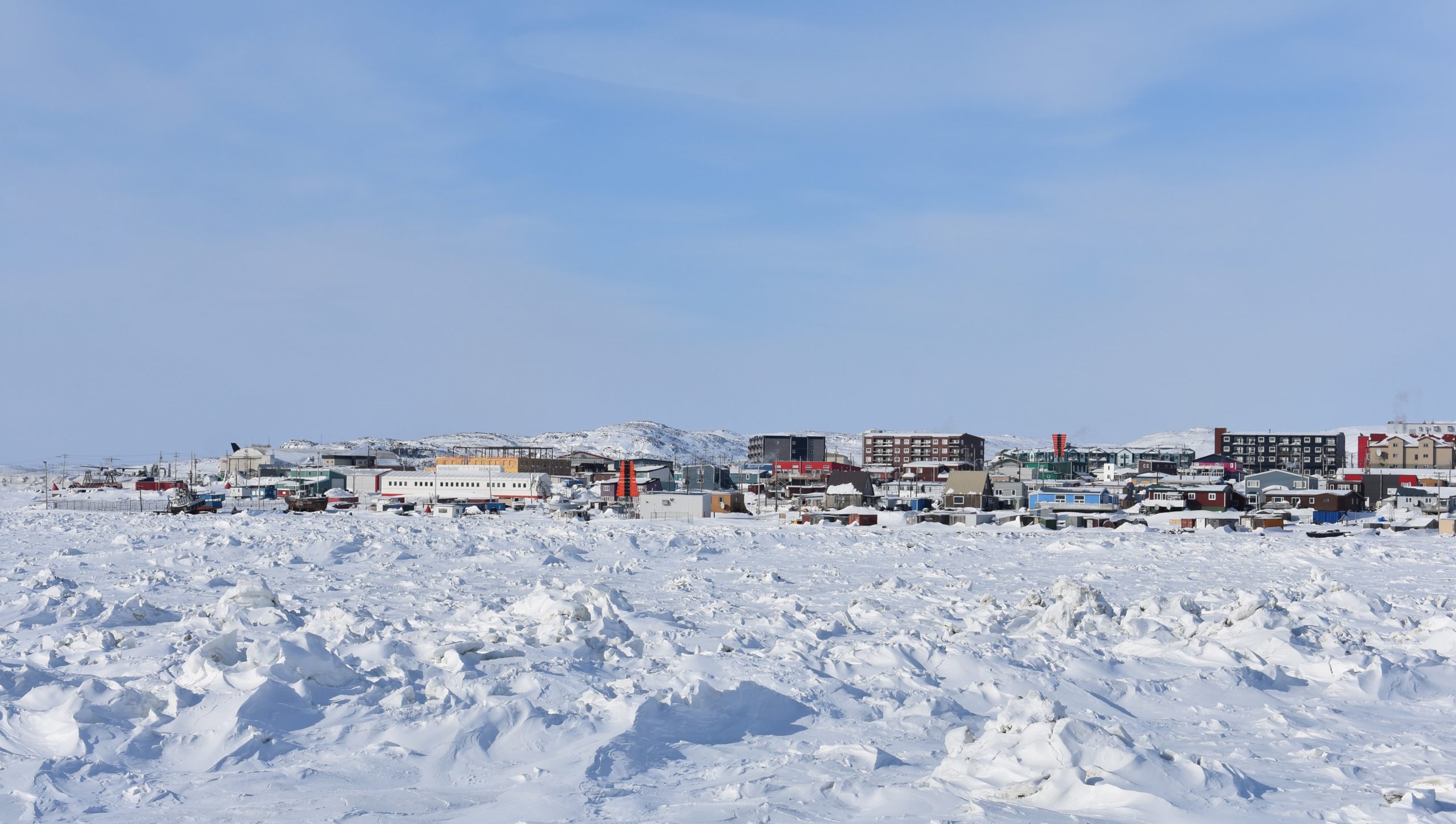 The City of Iqaluit in Spring 2021. Photo: Kaylia Little

Infrastructure in the Arctic is a topic that is growing in importance. Due to the harsh climate and often remote nature of settlements in the Arctic, communities struggle to have their basic needs met. The precarity of Canada’s Arctic infrastructure was highlighted most recently by the contamination of Iqaluit’s water supply. The slow reaction time to assess the situation and the slow move to a solution demonstrates a gap in Canada’s Arctic security and disaster preparedness. Iqaluit is a territorial capital, but it is often an afterthought of the Federal government as demonstrated by the over two-year delay of Prime Minster Justin Trudeau’s first visit, which happened in 2017.1)Sharp, G (2017) Prime Minister Trudeau’s first official trip to the Canadian Arctic. The Arctic Institute, March 9, https://www.thearcticinstitute.org/prime-minister-trudeaus-first-official-trip-canadian-arctic/ Accessed on March 23, 2022 This is further validated by its housing crisis, subpar telecommunications infrastructure, poor waste management, limited health infrastructure, and now a water crisis created, in part, by a lack of understanding of the infrastructure needs of the climate. As climate and environmental changes increase the strain on already limited infrastructure, issues like these will become more frequent. Addressing the water infrastructure gap in the Canadian Arctic will require a well-funded and climate-informed approach to ensure that it meets the needs of current and future generations.

In early October 2021, residents of Iqaluit, Nunavut began to notice a foul taste and smell coming from the tap water. Typically, the water in Iqaluit is safe to drink. At first, reports were limited to a community Facebook group, but eventually an official complaint was made to the City of Iqaluit. The initial testing of the city’s water supply found no evidence of fuel or other contaminants. Residents were reassured by the mayor that the water was safe to drink. This news received mixed reactions, with some residents being reassured and others not convinced. Complaints and worries continued to be shared on the community Facebook group. The continued concerns led to a second round of testing of the water supply, which revealed the presence of fuel in the water, making it unsafe for drinking and even for bathing for babies and pregnant individuals. For a remote community, this was a devastating blow, as bottled water had to be flown in from southern Canada. The City of Iqaluit and Government of Nunavut began distributing free water jugs and bottled water. Others took to the Sylvia Grinnell River, which is a trusted natural source of fresh water. After confirming the presence of fuel in the water supply, it took two months for officials to find the source of contamination, which was identified as a 60-year-old fuel tank that was buried next to the water treatment plant. Due to the prolonged water crisis, the Canadian military was dispatched to Iqaluit to set up a temporary water treatment site on the Sylvia Grinnell River.2)Meral J (2021) Canadian Armed Forces now providing potable water to residents of Iqaluit”. CBC News, November 9, https://www.cbc.ca/news/canada/north/iqaluit-water-canadian-armed-forces-emergency-1.6243307. Accessed on January 30, 2022 In the end, it took over two months for the contamination to be identified and removed from the water of Iqaluit. In January 2022, a new “Do Not Consume” order was issued after fuel contamination was discovered once again.3)Nunatsiaq News (2022) Boil water advisory issued for Iqaluit, Nunatsiaq News, January 19, https://nunatsiaq.com/stories/article/boil-water-advisory-issued-for-iqaluit/. Accessed on January 30, 2022

Water crises like the recent fuel contamination are not new to residents of Iqaluit. In 2019, the City of Iqaluit spent $330,000 in two and a half weeks thawing frozen water pipes.11)Jane G (2019) City of Iqaluit says climate change is contributing to its water pipe woes. Nunatsiaq News, March 18, https://nunatsiaq.com/stories/article/city-of-iqaluit-says-climate-change-is-contributing-to-its-water-pipe-woes/. Accessed on January 30, 2022 The freezing of the pipes was directly caused by climate change, the effects of which are much more apparent in polar regions. Instances like these are becoming more frequent in Iqaluit, which declared water emergencies in both 2018 and 2019 due to historic lows in the City’s potable water reservoir, Lake Geraldine. These emergencies were caused by a combination of low precipitation, leaking infrastructure, and population growth.12)Jackie M (2019) City of Iqaluit declares 2nd water emergency in 2 years. CBC News, August 6, https://www.cbc.ca/news/canada/north/lake-geraldine-city-iqaluit-water-emergency-1.5235383. Accessed on January 30, 2022 The government of Canada acknowledges in its Arctic and Northern Policy Framework that the Canadian Arctic is warming at three times the global average.13)Government of Canada (2019) Canada’s Arctic and Northern Policy Framework. Canada’s Arctic and Northern Policy Framework, https://www.rcaanc-cirnac.gc.ca/eng/1560523306861/1560523330587#s0. Accessed on January 30, 2022 The Framework discusses funding investments in transportation, education, and nutrition – all much needed areas of investment but it does not provide specific targeted funding for increasing the safety and resiliency of water infrastructure in Arctic and northern communities. Although Goal 2 of the Framework is “Strengthened infrastructure that closes gaps with other regions of Canada”, there is no mention of improving drinking water infrastructure in the North.

Estimates from the City of Iqaluit in 2019 stated that a full replacement of the city’s piped water system would cost $55.2 million, with another $106.3 million budgeted for road upgrades for the parts of the city that receive trucked water.14)Jane G (2019) City of Iqaluit says climate change is contributing to its water pipe woes. Nunatsiaq News, March 18, https://nunatsiaq.com/stories/article/city-of-iqaluit-says-climate-change-is-contributing-to-its-water-pipe-woes/. Accessed on January 30, 2022 For comparison, the total budget for City was only $83.2 million (operating and capital budgets combined).15)City of Iqaluit (2019) City of Iqaluit Budget 2019, https://www.iqaluit.ca/sites/default/files/2019_budget_1.pdf. Accessed on January 30, 2022 In June of 2021, the Nunavut Housing Corporation estimated that the price of building material in Nunavut had increased by 40% to 50% since 2020.16)Jackie M (2021) Skyrocketing building costs delay critical housing projects in Nunavut. CBC News, June 18, https://www.cbc.ca/news/canada/north/housing-nunavut-covid-costs-1.6070096. Accessed on January 30, 2022 With the increasing cost of materials, it is appropriate to assume that the upgrade estimates from 2019 would be at least double, if not more. The price Iqalummiut pay for underinvestment in water infrastructure is not insignificant. A new bypass system was installed as a result of the water emergency in 2021, which cost $100,000 and is only for temporary emergency use.17)David V (2022) ‘Nobody knows for sure’ how Iqaluit’s water became recontaminated, says Patterson. Nunatsiaq News, January 27, https://nunatsiaq.com/stories/article/nobody-knows-for-sure-how-iqaluits-water-became-recontaminated-says-patterson. Accessed on January 30, 2022 In November 2021, the federal New Democratic Party leader, Jagmeet Singh stated in a speech in Iqaluit that the latest estimate to fix the City’s water infrastructure was at least $180 million.18)The Canadian Press (2021) Jagmeet Singh calls on federal government to pay $180 M cost of Iqaluit water crisis. CTV News, November 16, https://www.ctvnews.ca/canada/jagmeet-singh-calls-on-federal-government-to-pay-180m-cost-of-iqaluit-water-crisis-1.5668091. Accessed on January 30, 2022 The increase in cost and lack of action by the Canadian federal government continues to demonstrate an absence of commitment to the Canadian Arctic.

Water emergencies such as those in 2018, 2019, and again in 2021 and 2022 cause added stress to community members and often facilitate a reduction in the quality of public services. For example, in 2019, the Quebec ombudsman stated that water shortages in Nunavik compromise the quality of health care in Inukjuak.19)Jane G (2019) Water shortages at Inukjuak clinic compromise quality of care: Quebec ombudsman. Nunatsiaq News, August 26, https://nunatsiaq.com/stories/article/water-shortages-at-inukjuak-clinic-compromise-quality-of-care-quebec-ombudsman/. Accessed on January 30, 2022 Thus, extended water crises can weaken already limited health infrastructure in Inuit communities like Iqaluit which are already facing extra pressure due to the continuing COVID-19 pandemic. Furthermore, water crises and other infrastructure emergencies can negatively impact small business and entrepreneurs. Restaurants and coffee shops either need to remain closed due to the inability to use water in the kitchens or accept additional financial burden if they choose to purchase bottled water to maintain operation.

The impacts of Iqaluit’s decaying and limited water infrastructure go beyond those felt during a crisis. The current water source that the City relies on restricts its growth. No new building developments can be added to the current water source.23)Jackie M (2022) Surging housing prices in Iqaluit have many feeling hopeless. CBC News, January 4, https://www.cbc.ca/news/canada/north/housing-iqaluit-infrastructure-1.6303663. Accessed on January 30, 2022 Iqaluit and Nunavut have a well-documented housing shortage, which is caused by a myriad of issues including water infrastructure. The complexity of infrastructure issues cannot be overstated, but the Canadian federal government’s lack of a comprehensive plan to address the deficits with a committed budget demonstrates the systemic inattention to issues facing northern and Arctic communities. If Canada wants to support a strong, safe, and resilient Arctic it needs to commit to long term plans to rebuild Northern infrastructure. Any new infrastructure must be climate informed and built with a rapidly shifting environment in mind.

Kaylia Little is a PHD Candidate in Sustainability Management at the School of Environment, Enterprise and Development at the University of Waterloo.