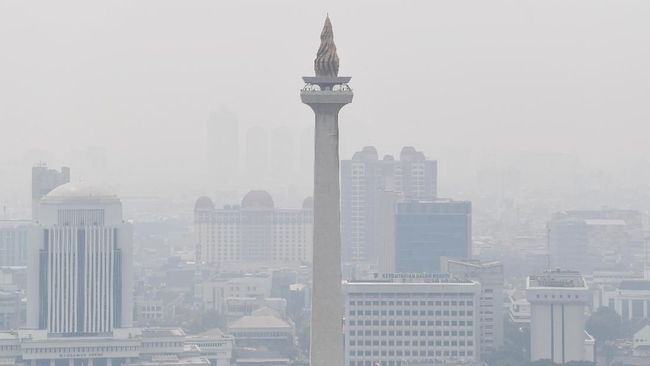 The protest was to commemorate the one-year anniversary of the victory of a citizen’s lawsuit over the right to clean air.

“This action is taken to remind the Governor of DKI Jakarta, who chose not to appeal the decision of the Central Jakarta District Court a year ago, to immediately carry out his obligations,” said Indonesian Greenpeace Climate and Energy Campaigner Bondan Andriyanu.

Andriyanu added that even 365 days after the victory of the citizen’s lawsuit, air pollution is still a serious problem for Jakarta residents. The residents’ victory, which should have resulted in clean air, had not yet been fulfilled.

According to Andriyanu, so far, there has been no policy change that encourages the creation of clean air. He assessed that Jakarta’s air quality was getting worse.

In that month, the value of PM2.5 decreased due to the rainy season. However, entering the dry season in June to July 2022, the value became PM2.

Of the five regions that have been recorded – Central Jakarta, East Jakarta, West Jakarta, South Jakarta, and North Jakarta – none of them showed an annual average value of PM2.5 according to the recommendations of the World Health Organisation (WHO) which is 5 g/m⊃3; per year.

These areas have instead exceeded the WHO recommendation by 7.2 times. The annual average of PM2.5 for Central Jakarta and North Jakarta is in the moderate category whilst the other three areas are in the unhealthy category for the sensitive group.

The highest level was the East Jakarta area with an annual average of PM2.5 reaching 44 g/m⊃3; exceeding the WHO recommendation by 8.8 times.

This is clear evidence that the government, both central and local, is not serious in dealing with the issue of air pollution and is negligent in maintaining the safety of its citizens. In fact, more and more studies are finding that air pollution is proven to have a negative impact on human physical and mental health and can cut human life expectancy worldwide by up to 2.2 years.

Andriyanu emphasised that the key to change remains in the hands of the central government, especially now, when local governments have entered a demissionary status.

According to Andriyanu, when Anies did not appeal, he could immediately implement the court’s decision. Among the actions could be controlling the sources of pollutants from movable and immovable objects, being transparent on air pollution control plans, and encouraging public participation.