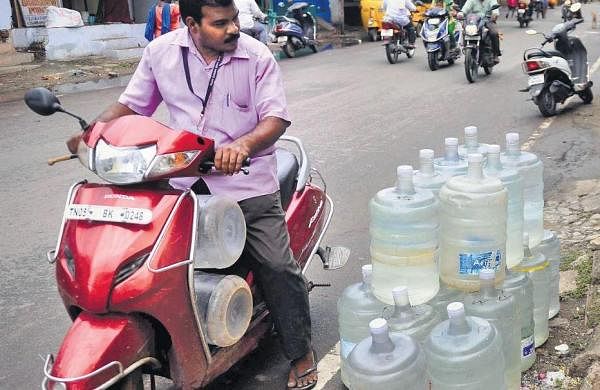 CHENNAI: Though temperatures are soaring, packaged drinking water industry continues to remain in troubled waters. Compared with pre-pandemic period, demand has fallen by at least 40%, say sellers. They attributed the fall mainly to a proliferation of unregulated private tankers supplying drinking water.

According to E Saravanan, general secretary of Greater Tamil Nadu Packaged Drinking Water Association, a unit usually producing 1,000 cans of drinking water a day now makes only 500-600 cans. Taking into account all its branches, including recycling, production, and supply, the revenue of the bottling industry in Chennai runs into millions of rupees. This also means that when demand plunges, thousands of people employed in the industry risk losing jobs.

“There is nobody to check the quality of water supplied by unregulated water tankers. FSSAI and ISI say they cannot regulate loose water; only packaged water comes under their purview,” said Saravanan. Earlier only those tankers having a capacity of 12,000-20,000 litres plied in the State. Following an uptick in demand, however, tankers with a capacity of 1,000-2,000 litres, too, joined the business, he added.

“The Bureau of Indian Standards has been seizing many cans of water citing quality issues. When licensed units like us have to meet its standards, unregulated tankers go unnoticed,” said J Anantha Narayanan, president of Greater Tamil Nadu Packaged Drinking Water Association. “Only when the government appoints a body to regulate such water tankers will be there chances of the industry’s revival,” said L Krishnan, who owns a packaged drinking water unit in the city.

According to the records with the associations, the daily sale of packaged drinking water in the State has fallen to 1.1 crore litres from 1.5 crore litres before the pandemic.  Other reasons cited by the suppliers include almost 50% of offices in Chennai remaining shut and people moving to their hometowns or installing water purifiers during the pandemic.