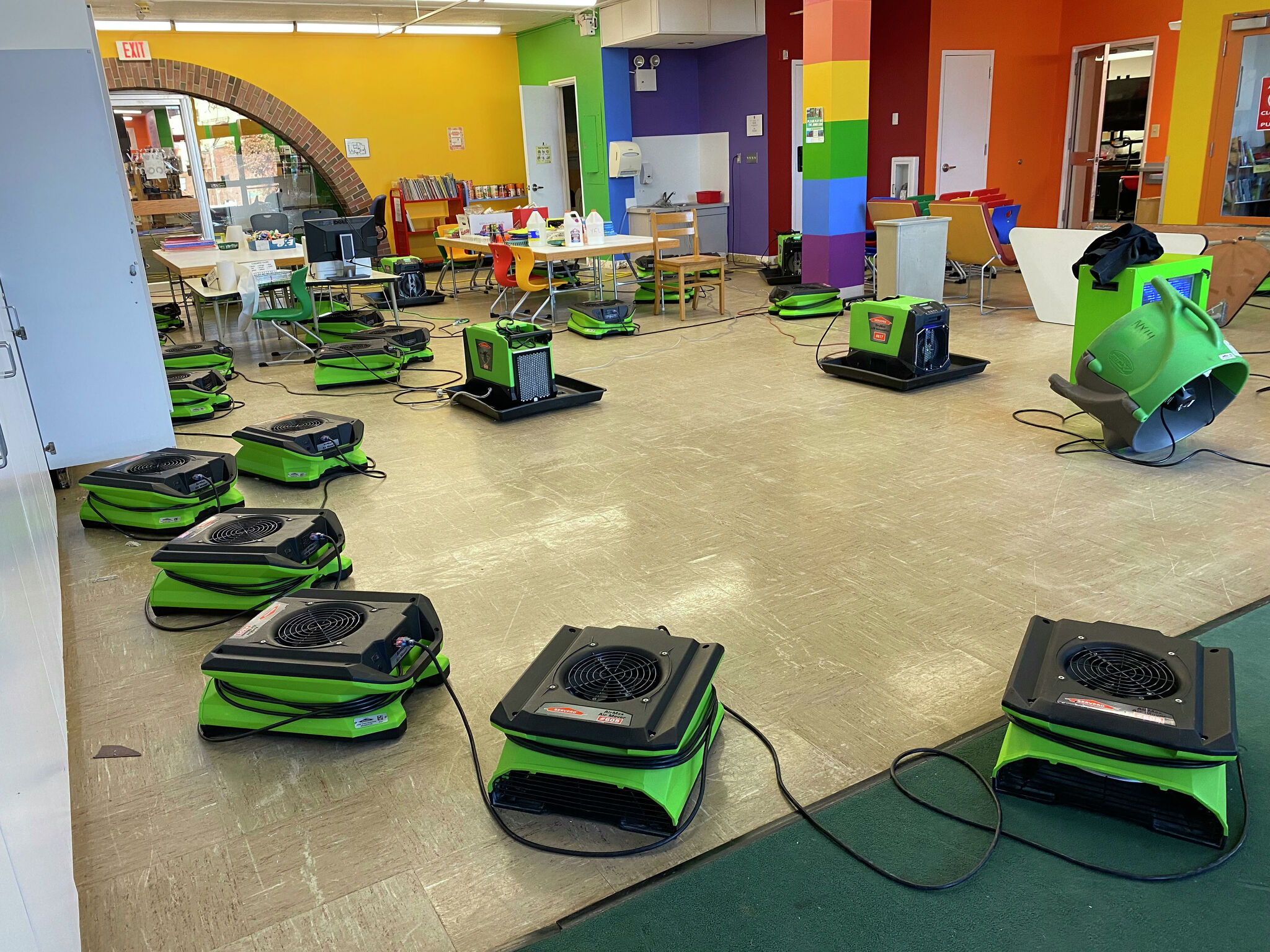 Two floors of the three-story building, consisting of several, aging jury-rigged structures, including an old bank, were affected by the deluge caused by remnants of Hurricane Nicole.

The director immediately knew the situation couldn’t be resolved with a few strategically placed buckets.

“It was basically raining in parts of the library,” she said this week. “You don’t want it to rain in the library, so that was alarming,” Burkey said.

Fortunately, she said, most of the damage was confined to employee rooms and other nonpublic areas. “The water came in, soaked the activity room, office behind the checkout desk, through the floor and down into the office area below,”  Burkey said.

She called in ServePro, which delivered 115 industrial floor fans, eight dehumidifiers and a hydroxyl air purifier.

Equipment scattered throughout the area and electrical cords snaking around each of the rooms presented a scene Burkey likened to “a neuro network of fans and dehumidifiers and tubing and extension cords,” she said.

“It became very clear very soon that we were dealing with more than a couple of carpet extractors and a dehumidifier,” said the director, who stayed until 1 a.m. Sunday and was back at work within seven hours.

She recalled a ServePro technician comparing the loud sound inside to an airport runway.

The library was closed  immediately, and about 12 staff members were asked to work from home, while others were temporarily relocated.

The remaining water-stained ceiling tiles show the wreckage: Shelves sit empty, a ladder propped up in the corner, and primary-colored activity room adjacent to the children’s area has a circle of neon green fans that match parts of the wall paint.

The problem is, several of the buildings have flat roofs, Burkey explained.

Some books remaining to be shelved are a loss, the director said, as are craft supplies, construction paper and other items.

Several portions of the library are closed off for eventual cleanup, said Burkey, who was eager for the city’s insurance adjustor to assess the damage.

Over many years, Burkey pointed out, conditions have been deteriorating, necessitating a host of temporary repairs just to keep the facility operating. “We spent a lot of years doing stopgap measures, and it definitely shows,” she said. “This is an extreme example of that.

“This is part and parcel with dealing with old buildings that have been cobbled together,” Burkey said.

For the long run, the library is developing a vision for the future to include either a full renovation or entirely new building as part of the city’s long-term riverfront revitalization project, Return to the Riverbend. A feasibility study is underway.

“Even if we decided tomorrow to build a new library, we’re going to be in this building for a while,” Burkey said. “We’re going to do our absolute level best to keep it dry … and healthy.”

City Health Director Kevin Elak came by to conduct several air quality tests for mold and other issues, the results of which Burkey expected this week.

In the meantime, doors to the rooms with water damage were shut to increase warmth to endure things dry faster.

“We’re going to do everything we can to work quickly and safely, and get back to a point where we can be open to the public in a healthy and safe way as soon as possible,” Burkey noted. “It could always be worse.”

“Knock on wood, fingers crossed. We’ll get through this as we always do,” she said.

Online services and downloadable materials  still are available, but the book drop is unavailable for lack of staff. For information, visit russelllibrary.org.